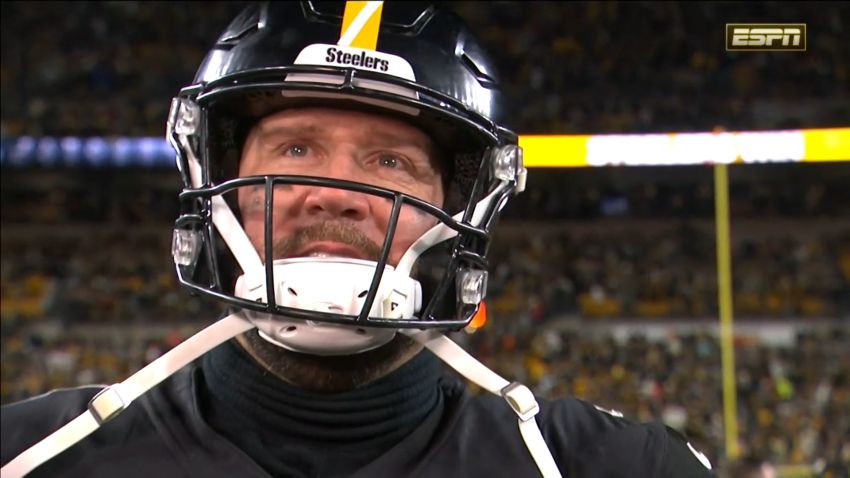 Since making his debut as a rookie in 2004, and over 91 wins at Heinz Field since then, quarterback Ben Roethlisberger has entertained the Pittsburgh Steelers with his unique way of playing the QB position, and leading his franchise to success on the field. So in a contest expected by most, and even hinted at by Roethlisberger himself, to be his final one in front of the Heinz Field crowd, many hoped to see one more performance from Big Ben in his own signature brand of football.

It wasn’t a complete “turn back the clock” moment from the 39-year-old Roethlisberger in the game. But the contest did end on a happy note for he, his teammates, and his friends and family that had traveled to Heinz Field for the game. Pittsburgh defeated their rivals, the Cleveland Browns, 26-14, to keep its playoff hopes alive into Week 18. And on the final snap of the game, it was Roethlisberger who was sent out to take the final knee and officially end his home swan song.

“I didn’t think I was going back out, and then anybody in football will tell you, when you’re on offense, that’s the best play in football, the best formation, the best play,” Roethlisberger said in his postgame press conference shared by the team. “To go out there and take a knee made it probably even more emotional and more real.”

The emotion and circumstances of the game for Roethlisberger grabbed headlines all week, and had all eyes on Monday Night Football as things came together to set up a big final chapter for the Steelers’ all-time leading passer.

There were playoff stakes on the line, and it was a rival (who passed on Roethlisberger in the 2004 NFL Draft) in the building competing against Pittsburgh. Pittsburgh head coach Mike Tomlin in his postgame press conference said Roethlisberger took the lead in checking that emotion and staying focused on preparing for the task at hand, especially with the playoff implications involved.

But after securing the win, the emotion was able to enter the foreground a little more, as Roethlisberger reflected on his 92nd – and likely final – win at his home stadium, and one more victory that came as he played the game in his own unique way.

“It wasn’t pretty, but like I said out on the field, I think that’s kind of been, feels like that’s been my style: Not pretty, but finding a way to win,” Roethlisberger said, “and I think that’s 92 wins here at Heinz Field, and that’s what it’s always been about for me, is winning football games, and this is one more that’s very special.”

His final stat line indeed wasn’t pretty – Roethlisberger completed only 24 of 46 passes for 123 yards, with a touchdown and an interception. But Pittsburgh maintained the lead for the entire contest after a 10-play drive ended with a touchdown early in the second quarter. From there, another pair of lengthy drives added field goals to the lead, keeping Pittsburgh in front until a failed onside kick by Cleveland and subsequent Najee Harris touchdown run iced the win away.

Much about Monday night’s win was a callback to the types of wins he had been earning over Cleveland and others in Heinz Field since 2004. Not the first win over a rival, not the first that kept playoff hopes alive or clinched a .500 season, not the first where he overcame a lesser stat line. Just a win where Roethlisberger played the game “his style,” getting another AFC North victory in whatever way possible at the place he has called home for 18 seasons, and called home one final time on Monday night.