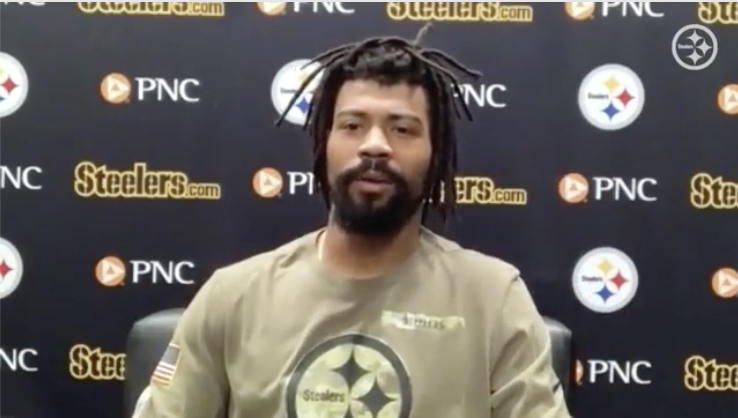 Late in Sunday’s regular season finale between the Pittsburgh Steelers and the Baltimore Ravens, star Steelers’ safety Minkah Fitzpatrick quietly made arguably the play of game.

With 31 seconds left and the ball on the Baltimore 30-yard line, Ravens’ quarterback Tyler Huntley floated a sideline throw to what appeared to be a wide-open Marquise Brown along the near sideline in front of the Ravens’ bench. Instead of it being 21-yard completion giving the Ravens a first and 10 at the Steelers’ 49-yard line with 25 seconds left and two timeouts remaining, while employing all-world kicker Justin Tucker, Fitzpatrick somehow came through to make a play.

Fitzpatrick did a great job closing from near the middle of the field to the sideline, laying the wood to Brown along the sideline while shockingly getting his hand perfectly on the football at the point of contact to punch the ball away. That play ultimately saved an explosive play for the Ravens and, in the end, saved the game for the Steelers, who punched their ticket into the AFC playoffs, setting up a Wild Card Round matchup against the Kansas City Chiefs next Sunday night at Arrowhead Stadium once again.

On Monday, Steelers’ cornerback Cameron Sutton — who had a crucial interception in the end zone against the Ravens Sunday — was asked multiple times about Fitzpatrick’s play. Aside from crediting Fitzpatrick for being an incredible player, Sutton credited Fitzpatrick’s knack for finding the football in big spots.

“Yep, obviously…just a Cover Two shell-type look. Minkah did a great job at disguising and just moving around, you know, messing with his alignment and things, giving [Tyler] Huntley different things to look at, and that’s great,” Sutton said to reporters Monday, according to video via Steelers.com. “Any great defender, you just wanna move around. You just wanna obviously give quarterbacks different things and different coverages to look at. Obviously, Mink being visual, obviously knowing and understanding his role within the defense that allows him to get to where he needs to be.

The play was largely glazed over live as the Ravens still had plenty of time and timeouts at their disposal to get into field goal range. One full day removed from the game though, and that play serves as a pivotal one in the grand scheme of things. Though he doesn’t have the turnover numbers he once had in Pittsburgh, Fitzpatrick remains an elite-level safety, one that covers up a lot of issues for the Steelers on the back end.

Sutton sees it every day and praised Fitzpatrick after discussing the play, calling the All-Pro safety a great leader and one that is very detailed in his studies week to week, allowing him to succeed between the white lines.

“Obviously he’s just a playmaker. Overall, just who he is, a guy who is very knowledgeable and studies the game,” Sutton said. “Very detailed in his study, very detailed and specific in his game. It’s always great having guys like that, a guy like that behind you, being in places where he is supposed to be, keying and seeing things the same as your corners or the guys in front of him.

“The guy already has a knack for the ball, making plays on when the balls in the air. He is obviously a great dynamic player. He’s gonna be here for a long time. He’s real special though.”

If the Steelers want to advance in the AFC playoffs with a win over the Chiefs, the Steelers will need Fitzpatrick to be special once again, this time against a dynamic passing attack in the Chiefs.