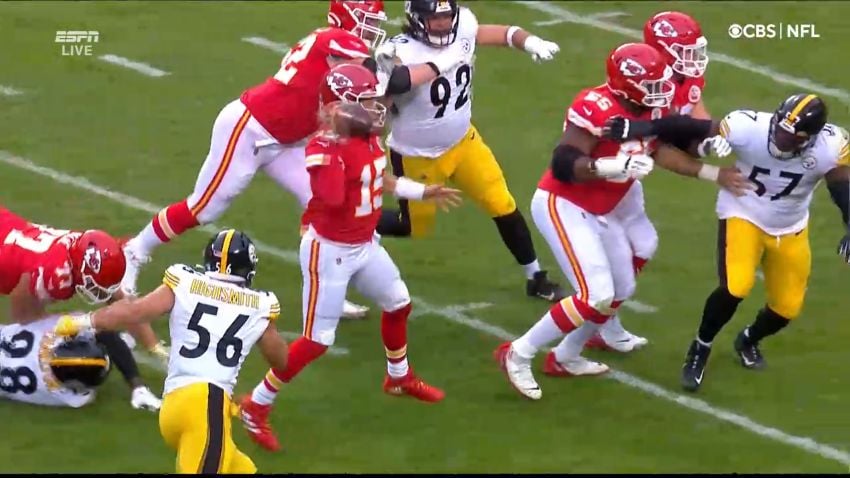 He may not win the MVP Award every year, but you could certainly make the case that Patrick Mahomes is the best quarterback in the game. He’s certainly right up there, and it’s somewhat remarkable how somewhat under the radar he’s flown in a year in which he threw for 4,839 yards and 37 touchdowns.

The Pittsburgh Steelers unfortunately need no reminders about how good he can be in-game. They already lost to him just a couple of weeks ago in a game in which he completed 23 of 30 passes for 258 yards and three touchdowns, with the bulk of that damage locked in by halftime, and much of the rest of the game coasting. Head coach Mike Tomlin is most concerned about his ability to create his own offense.

“Obviously it starts with Mahomes and his talents and his ability to challenge you, schematically, structurally, but also in the ad-lib fashion as he extends plays”, he said yesterday in his pre-game press conference when discussing the Chiefs’ offense. “His ability to create time and space for himself and allow plays to develop is unique and challenging”.

“He threw a red-zone touchdown on us up there last time. Man, he probably held onto that ball five or six seconds”, he went on. “He doesn’t feel pressure that’s not there. He’s got a low pulse rate; I think that allows him to extend plays, and it’s a big component of what they do”.

There’s a quote in there I want to elaborate on, and you know which one, since it’s in the title, but I think it’s an important one. “He doesn’t feel pressure that’s not there”, Tomlin said. That means he doesn’t rush a throw only because of some internal clock quarterbacks are supposed to have, about when it’s time to get rid of the ball because one expects pressure to be there by then.

Mahomes doesn’t have that clock—or at least, he’s not bound by it. He has a strong sense of when the pressure is actually there, so he doesn’t feel the need to rush a play just because time is ticking. And the touchdown to which Tomlin referred was a great example.

And he also has enough athletic ability, as Tomlin said, to buy not just time, but space. Simply resetting the pocket by moving away from pressure is also a huge part of his game, and the Chiefs’ offense—and he has the weapons, like Tyreek Hill and Travis Kelce, to make teams pay.

“They get you in uncomfortable matchups down the field because of his ability to do that. You can’t get caught with 10 down the grass as he does that, for example”, Tomlin said. “You can’t get caught with 87 as he does that. Those are gonna be big plays. So we’ve got to rush him extremely well and smart. We’ve got to work hard to keep a lid on it”.

The Chiefs didn’t even have Kelce when these two teams played weeks ago, and Hill only played 29 snaps. They still effortlessly put up 36 points.