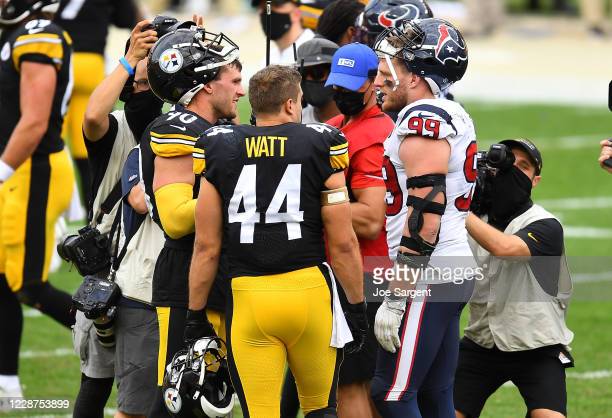 J.J. Watt may be a bit biased, but he’s also correct. Younger brother T.J. Watt had an incredible season and is one of the most feared players in the league. In his mind, there’s no better pass rusher in key situations than one T.J. Watt.

“It’s incredible. I don’t know if there are truly words to describe watching it,” he said via the Cardinal’s website. “Having been obviously in a similar situations to him and knowing how difficult it is to do what he did. And knowing how hard it is to play at such a high level in this league and how good the players you’re playing against are and how teams are trying to stop you at all times. And just everything has to go your way and you have to keep fighting.”

J.J. acknowledged T.J. being able to tie the record despite playing through injuries makes his season all the more remarkable.

“And he’s been injured this year and he’s missed however many games he’s missed…still to be able to tie the NFL sack record, I mean, it’s unbelievable.”

Watt missed two full games and halves of two others, effectively meaning he played in just 14 of a possible 17 games this year. A strong counter to those who want to put the asterisk next to Watt for accomplishing the sack mark in a 17-game season.

22.5 sacks is one of the few things J.J. Watt hasn’t done in his career. And he made sure to show plenty of brotherly love.

“There are some incredible defenders in this league, but you can’t convince me that there is any other defender that you would rather have out there with the game on the line than number 90 rushing the passer trying to get you a sack to win the game. I mean, what he did in crunch time in some of those games this year, and some of the plays that he made, he’s unbelievable. And I’m very fortunate to be able to watch him. I’m extremely proud as a brother to have seen how hard he’s worked to accomplish a goal and to know what it means to him.”

Watt finished second in the league in third/fourth down sacks with nine, just a half-sack behind Chicago’s Robert Quinn and well ahead of other Defensive Player of the Year candidates like Myles Garrett (5.5) and Aaron Donald (4). He came up clutch time and time again, producing red zone stops, drive-ending sacks, and game-defining plays. He earned every penny the Steelers paid him this season. J.J. knows that if Watt was still waiting on a contract, his price would’ve gone up even higher.

“And for him to get the contract before this season started and to know that some people questioned if it was too big. Imagine if you had waited until after this season to get that contract. Blank check.”

He finished by sharing the story of the two watching Sunday night’s nail-biting game, ending in a Daniel Carlson field goal to put the Raiders – and Steelers – into the postseason.

Though it’s a longshot, all three Watt brothers are in the playoffs, J.J.’s Cardinals and T.J. and Derek’s Steelers. It would take a lot to happen but there is now the possibility of an all-Watt Super Bowl. With the way this season has gone, never say never.