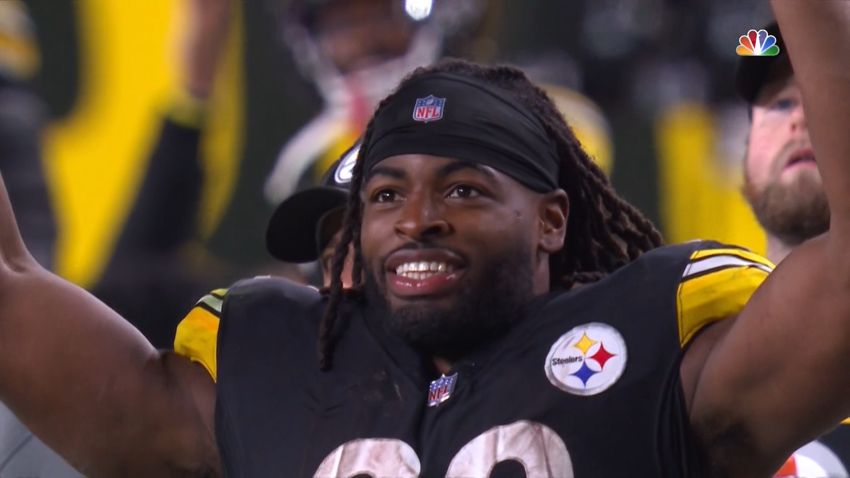 Pittsburgh Steelers rookie running back Najee Harris just recently set the team’s all-time rookie record for yards from scrimmage. He will surely hit the all-purpose yardage mark, almost surely the rushing yardage mark, and has a shot at tying or passing the all-purpose touchdown mark as well—though he would need five scores on the ground to break the rushing touchdown mark.

All in all, while it has been a grind, it has been a successful rookie season for the first-round pick, showing strong signs of what is to come. Natural talent is obviously a core element in his performance, but so is his competitiveness, says his teammate in both Pittsburgh and Alabama, lineman J.C. Hassenauer.

“I think Najee’s the ultimate competitor. I knew it my senior year—his freshman year in college. He’s the definition of a hard worker”, he said of Harris in speaking about the back yesterday. “Anything you would want in a running back, anything you want in a teammate is Najee. He’s one of the most talented players I’ve been with. His work ethic, he’s not given anything. He works for everything he’s earned. It’s well deserved”.

Harris enters Monday’s game needing just 16 rushing yards to hit 1,000 on the season. He would be just the second rookie in team history to hit 1,000, and the first since Franco Harris rushed for 1,055 yards in a 14-game 1972 season—the year he also set the rushing touchdown mark of 10.

As of now, it’s shaping up for Hassenauer to start the game at center, which would mark his second start of the season and the first at the center position. Harris’ draft classmate, Kendrick Green, has started every game at center so far this year and played nearly every snap, but he has not practiced this week and is unlikely to play, given the missed time.

The Steelers will be facing the Cleveland Browns, who do have a top-10 rushing defense, and who are now pretty much on the other side of a COVID-19 outbreak. They have been out several players in recent weeks, but now only five players are on their COVID reserve lists, only three of them from the active roster.

On the flip side, the Steelers currently have 12 players on their own COVID reserve lists, including four defensive starters, among them both of their inside linebackers, Devin Bush and Joe Schobert. They are joined by Chris Wormley and Arthur Maulet, as well as Isaiah Buggs, Anthony McFarland, and Zach Banner. Four of the five players on the practice squad reserve list have dressed for the team this season, including safety Karl Joseph.