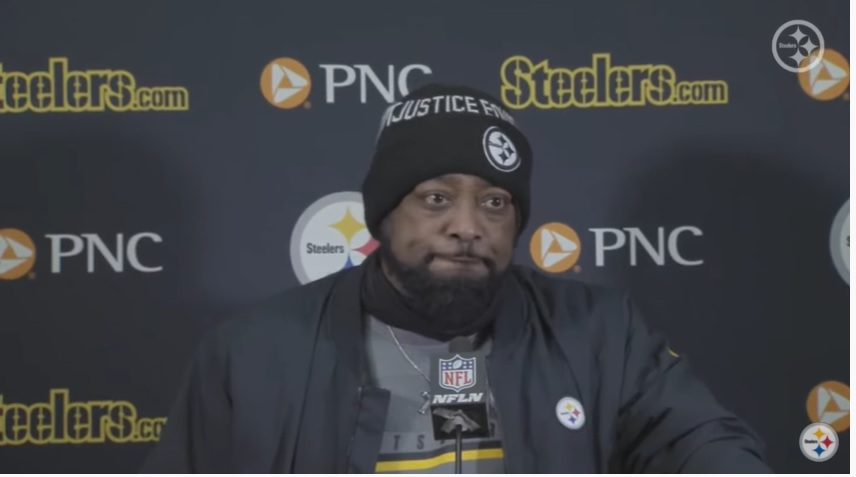 Eventually, the Ben Roethlisberger era would come to an end in Pittsburgh.

Unfortunately for the Steelers, head coach Mike Tomlin, and all of Steeler Nation, that era came to a screeching halt on Sunday night in the AFC Wild Card matchup between the No. 7 Steelers and the No. 2 seeded Kansas City Chiefs in a 42-21 loss.

Though things didn’t go the way he had hoped, Roethlisberger still finished with 215 passing yards and two touchdowns with no turnovers in his final showing.

Following the loss, Tomlin spoke with reporters and was short and sweet, crediting the Chiefs while also stating that the offense didn’t do enough, specifically the wide receivers who had numerous drops and failed to come up with any big plays in key spots.

But Tomlin saved his best for last on Sunday night, speaking glowingly of Roethlisberger in one succinct sentence, ending his press conference with class.

“He was 7,” Tomlin said, in regards to Roethlisberger’s effort on a night in which very little went right. “It’s been an honor and a pleasure. I don’t have the words.”

The pairing spent 15 seasons together in the black and gold, sharing plenty of highs, including a win in Super Bowl XLIII, and plenty of lows, including the fourth straight playoff loss as a pairing that ultimately ended Roethlisberger’s career with a whimper.

Though he was short and sweet and showed some emotion regarding Roethlisberger, expect more emotion and more glowing remarks from Tomlin on Tuesday when he reconvenes with the media.

Surely all of Steeler Nation shares the same sentiment as Tomlin. It’s been an honor and a pleasure to be able to watch a quarterback the caliber of Roethlisberger week in, week out for the last 18 years, giving the Steelers a chance seemingly every week.

Andy Reid: "It was an honor to coach against Ben in his last game.''

“It was an honor to coach against Ben in his last game,” Reid said to reporters, according to ESPN’s Adam Teicher.

Reid shared a long embrace with Roethlisberger on the field following the game, for what it’s worth. The two have competed against each other for years, so there’s certainly mutual respect and admiration there.