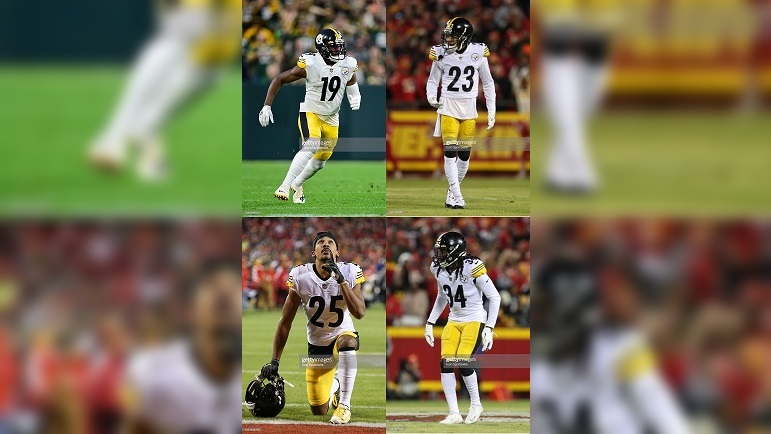 In less than seven weeks from today, the 2022 NFL free agent signing will officially get underway. Not counting retiring quarterback Ben Roethlisberger, currently the Pittsburgh Steelers have 16 players who are scheduled to become unrestricted free agents at the start of the new league year in March. Four of those players, wide receiver JuJu Smith-Schuster, cornerback Joe Haden, cornerback Ahkello Witherspoon and safety Terrell Edmunds cracked the top 140 list of soon-to-be free agents that Pro Football Focus has now released.

PFF has Smith-Schuster ranked 42nd overall on their list and 8th overall at the wide receiver position. They project another one-year, $8 million contract for him during the offseason. Below is what they have to say about him.

Smith-Schuster turned down offers from the Baltimore Ravens and Kansas City Chiefs to stay with the Steelers, who selected him in the second round of the 2017 NFL Draft. Smith-Schuster was once believed to be supplanting Antonio Brown as the best wide receiver in Pittsburgh, but even with Brown no longer in town, that still isn’t the case. However, Smith-Schuster plays a very valuable role as a sure-handed slot receiver who quarterbacks can rely on in critical situations. He ranks top-15 in third-down receptions by a wide receiver since he was drafted in 2017 (85). That said, he will once again likely be facing one-year flier offers after missing much of the 2021 season to injury.

PFF has Haden ranked 99th overall on their annual free agent list and as their 13th overall cornerback to boot. They project Haden’s free agent market value at one–year for $5 million.

Haden was looking for a contract extension before the 2021 season, but the Steelers didn’t oblige. It’s likely he will now be playing elsewhere in 2022, and he’s still a solid zone cornerback with a high floor entering his age 33 season. Haden earned overall and coverage grades above 60.0 in each of his five seasons with the Steelers and looks to have a year or two left in him.

Witherspoon and Edmunds close out the steelers players listed in the PFF rankings at 127th and 137th overall, respectively. Witherspoon is PFF’s 17th ranked free agent cornerback while Edmunds is their 13th ranked safety out of 15 on the list. PFF has not yet listed market values for either Witherspoon or Edmunds and no summary has been written for either.

Noticeably absent for the PFF top 140 list is Steelers tackle Chukwuma Okorafor. Guard Trai Turner is another soon-to-be scheduled free agent that many might have predicted having a shot to be in a top 140 list such as this one from PFF.

It will now be interesting to see if the Steelers wind up re-signing any of their scheduled 16 unrestricted free agents prior to the start of the 2022 new league year on March 16.