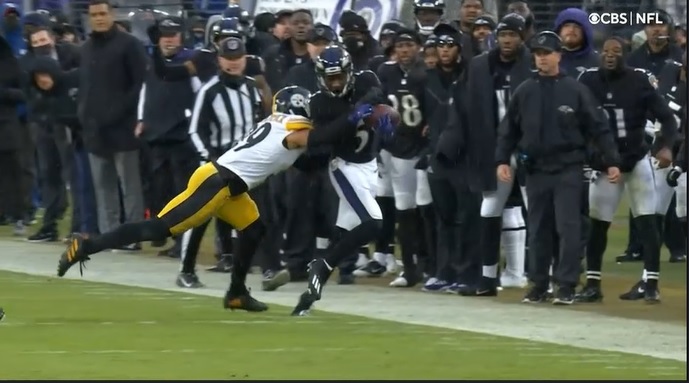 Even putting aside everything that happened Sunday night, it’s still hard to believe the Pittsburgh Steelers beat the Baltimore Ravens Sunday and are in the playoffs. It was classic Steelers/Ravens so in that respect, yesterday’s wild game shouldn’t be that much of a surprise. But there were so many moments that got Pittsburgh the victory. Some big, some small, some you look at in hindsight and say “woah, that was huge.”

In the middle of fourth down conversions, T.J. Watt sacks, and Chris Boswell’s game-winners, there’s three plays that could easily slip through the cracks. Three plays that looking back were huge in netting Pittsburgh the win: Cam Sutton’s INT, Minkah Fitzpatrick’s breakup, and Najee Harris’ one-handed catch.

Forgotten or not, they’re worth reviewing.

Baltimore up 10-6 on the first play of the fourth quarter. Driving with the ball at the Steelers’ 11 facing 2nd and 7. A field goal makes it a seven-point game, a touchdown a two-possession contest that would’ve felt very tough given the state of the Steelers’ offense.

Out of pistol, Ravens’ QB Tyler Huntley fakes the ball to the back. With all kinds of time, he forces a throw into the back of the end zone for TE Mark Andrews, his favorite target. Steelers are in zone coverage and reading Huntley’s eyes the whole way. Cam Sutton does a great job to close on the ball and finish the play with a diving catch. Don’t take that part for granted. Lot of DBs will get their hands on the ball. Not all of them finish it. And the difference between an INT and breakup there is massive.

Pittsburgh didn’t get points on the ensuing drive, but it flipped the field back for Baltimore. And this pick obviously took points off the board. Why the Ravens considered throwing the ball after running all day, I’m not sure.

Talk about important plays. This one saved the season. With about 30 seconds to go in the fourth quarter, Huntley found Hollywood Brown open along the right sideline. If he makes this catch, it’s Baltimore’s ball at Pittsburgh’s 48-yard line with 25 seconds left, the Ravens having both timeouts, and the greatest kicker in NFL history. Meaning, if Brown catches this ball, it’s basically game over.

Minkah Fitzpatrick makes an unbelievable play on the football here. A true, never-say-die attitude. Rally to the ball and still play with perfect technique, playing through the catch point (you guys know how much I love DBs who can do that) and literally punching the ball out of Brown’s hands.

Goes from a season-ending catch to an incompletion that leads to a punt. And gets to the game in overtime in the first place.

Given the circumstances, you won’t find many better plays by a DB than this one.

Chris Boswell’s 36-yard game-winner doesn’t happen if not for Najee Harris. There is no 15-play drive, no 4th and 8 conversion. None of that.

Harris playing with a bad elbow, Roethlisberger looked to check it down to him on the Steelers’ first offensive play of OT. But his throw was high and Harris had to reach up with his (uninjured) left hand and pull the ball down. If he doesn’t, LB Patrick Queen has a prime chance to pick it off. An athletic LB, he’s probably making a play on the ball. And if he catches it, it’s deuces, he’s scoring. Steelers’ season – and Roethlisberger’s career – ends right there. 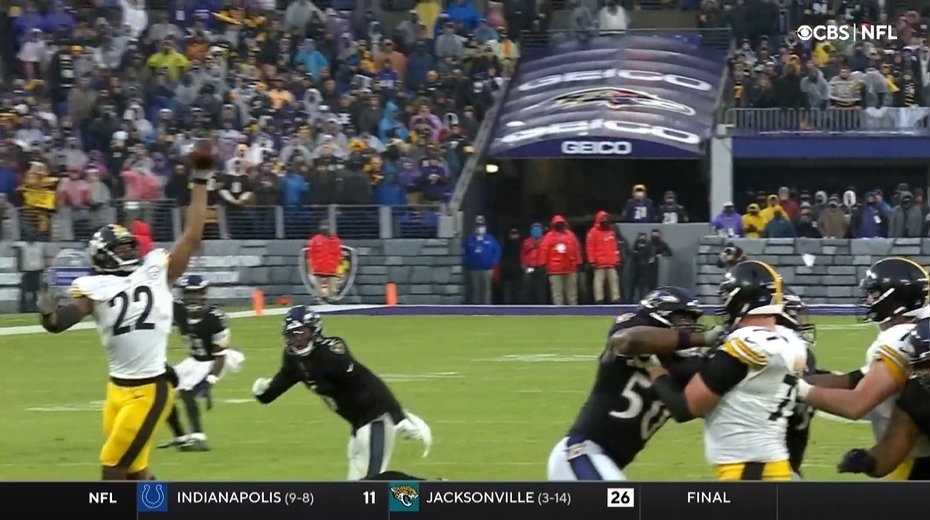 Not only does Harris catch it, he makes Queen miss and picks up a first down. The first step on the team’s game-winning drive.

In 2006 (the 2005 season), Ben Roethlisberger saved Jerome Bettis’ career from ending in disaster, tackling Nick Harper in the Divisional Game.

In 2022, a running back returned the favor. Najee Harris saved Ben Roethlisberger’s career from ending in disaster. Don’t forget that one. Or any of the other plays in this game.