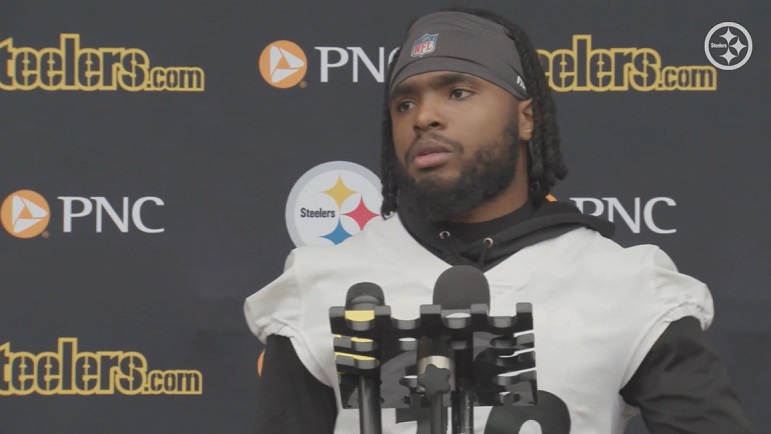 As of Thursday afternoon, the Pittsburgh Steelers are consensus 12.5-point underdogs to the Kansas City Chiefs ahead of the two teams meeting on Sunday night in an AFC Super Wild Card game. The Steelers sure seem to be running with, and having fun with, the fact they are considered such big underdogs for Sunday with no chance of winning in Kansas City. Thursday after practice was complete, Steelers wide receiver Diontae Johnson was asked his thoughts on the team being considered such big underdogs to the Chiefs on Sunday night.

“People are expecting us to go out there and have another tough loss like that so that’s what they’re expecting,” Johnson said on Thursday. “They don’t expect us to come back with a better plan.”

Johnson, like most of his teammates who have already addressed the media so far this week, seems to embrace the fact that not many people are giving the Steelers a chance to beat the Chiefs in Kansas City.

“I like being in this situation because once we win, don’t try to hop back on the bandwagon or nothing,” Johnson said. “Because remember all of that stuff you were saying now. So, I’m just going to leave it at that.”

What do the odds say when it comes to the Steelers’ chances of beating the Chiefs on Sunday night? Well, assuming the line doesn’t drop below 11.5 points, the Steelers will be considered a huge longshot to beat the Chiefs based on previous playoff betting lines and results. A Steeler Sunday night road win could possibly go down as the biggest road playoff upset of all-time, or at least in the last 25 years.

According to Pro Football Reference, teams are 1-22 straight-up as 11.5-point or more road dogs dating back to 1969. The one win? The Jacksonville Jaguars over the Denver Broncos in the 1996 playoffs.

The Steelers certainly seem to be embracing the underdog role right now, and the team sure seems to be very loose so far this week. That means all the pressure is on the Chiefs to not slip up at home on Sunday night. It certainly has been a weird NFL season to date as we have seen some huge underdogs win games during the regular season. The Jaguars were one of those huge upset winners just this past Sunday, and them beating the Indianapolis Colts at home helped get the Steelers into the playoffs.

Any given Sunday, right? We’ll find out if that’s the case for the 2021 Steelers on Sunday night.