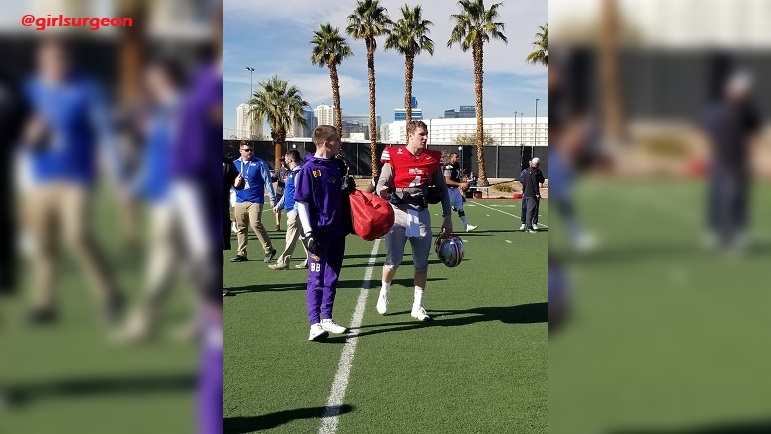 As 18 year veteran franchise QB and future Hall of Famer Ben Roethlisberger announced his retirement this past week, a large void was created. HC Mike Tomlin implied that both backup Mason Rudolph and former first round draft pick Dwayne Haskins would have an opportunity to compete for the role of starter for the 2022 season, but nothing is certain. Jay Glazer reported months ago that Tomlin prefers a veteran QB. Tomlin himself has mentioned the value of a mobile QB so many times this season we have all lost count but he has never elaborated on who that might be.

It is still entirely possible that the Steelers will draft a QB in a few months, so it makes sense to look at the possible candidates. This week at the East West Shrine Bowl, I was able to sit down with Brown University QB EJ Perry to talk about his path to the draft.

Growing up in Andover, Massachusetts, EJ has a very extensive sports pedigree. Both his mother and father each have six siblings. On his mom’s side, they all play baseball. On his dad’s side, it’s all about football. Several of his uncles played football and currently coach either in college or the NFL. His father coached basketball until EJ was 13 and then took over as the football coach.

Having his father as his high school football coach wasn’t necessarily an easier path. “When you’re going home every day and it’s 24/7 coaching…he’s not holding back and you’re only 14, 15, 16 years old, that’s a much harder thing to handle. But I was extremely grateful for that and it taught me how to handle any coaching that I would get and understand that no matter what they’re saying to you, they just want you to get better.”

Prior to his senior year in high school, Perry attended the Manning Passing Academy, run by Hall of Fame quarterback Peyton Manning and his brothers, retired Giants quarterback Eli Manning and Cooper Manning (who is actually the funniest one according to EJ).  He worked 6 hours a day on strength, fundamentals and technique, which laid the groundwork for his training since then.

Perry was a three-sport athlete in high school and was recruited to play both NCAA football and baseball. He committed to Boston College for the football program and also played basketball his freshman year as a walk-on. Although not a starter, his time with the basketball team taught him to contribute in other ways. Instead of just watching from the bench, he focused on bringing energy to his teammates and providing support to those on the court. He drew an analogy to football, where players are only on the field for half the game. He has taken those lessons to rally his teammates when the defense played throughout his football career.

Stuck behind starter Anthony Brown on the depth chart, EJ eventually made the decision to transfer to Brown University, where his uncle James Perry is the head coach. They kept it professional and EJ said he was no different than any of his teammates, always referring to his uncle as Coach Perry. They didn’t really see each other socially during the season other than Christmas. Ironically, he may have been the starter if he had stayed. Boston College fired the head coach the following year and Anthony Brown left to lead the Oregon Ducks. When asked if he regretted that decision in hindsight, he impressed me with his thoughtful response, explaining that whatever decision he made, it was his responsibility to make it the right decision going forward.

It has obviously worked out well for Perry. He was recently awarded the Bushnell Cup Award for the Ivy League offensive player of the year and the Bulgar Lowe Award for the New England offensive player of the year. In his senior year, he completed 66.5% of his passes for 3034 yards and 23 TDs. Add to that 402 rushing yards and 7 rushing TDs, which of course brought up the topic of QB mobility and how he approaches the choice of using his arm or his feet:

“I think in 2019 I had 800 yards rushing in 10 games. When I watch that film [I think] the vast majority of them were the wrong decision in terms of — there were guys open who are better at running that thing. And the fact is those receivers and running backs at the next level are gonna be much, much better at running the ball than me. So first and foremost, when I get a play call, my job is to get the ball in the hands of someone who’s really good at that job of moving it down the field. Once I exhaust those reads, then it’s a time to use your feet. And I think the biggest thing that you see successful quarterbacks and even mobile quarterbacks, you know, Patrick Mahomes, the Josh Allens, the Russell Wilsons, they use their feet to extend the play to throw the ball. So I think my goal is to just be able to use my athletic ability to extend plays and, and continue to look down fields and get their ball to people.”

Brown University hasn’t had a player drafted to the NFL in the last 10 years, and no QB from that school has ever been drafted. Perry had invites to the NFLPA Bowl and the Hula Bowl as well but thought the East West Shrine Bowl would provide the best opportunity. When I asked him about how he might improve his draft stock this week, he replied that hasn’t been a focus for him:

“For the guys who have long term success, just focus on getting better as a player. I’m not trying to fool anyone and not trying to deceive anyone or be someone I’m not. I’m just trying to use this opportunity to learn from this unbelievable coaching staff they’ve put together. Having conversations with [Seattle Seahawks QB] Coach Joseph and how it works in a locker room, how to learn this playbook and operate in different techniques. He works with Russell Wilson, who’s an unbelievable player and sure…all these different, unbelievable NFL coaches. And that’s what I think is really important about this week, as much as it is an opportunity to showcase who you all are and do interviews and practice. I think it’s also an opportunity to get better and refine your skills. And it’s a crash course on what we’re all gonna have to do in two months and getting a playbook and learning it extremely fast.”

Here is Perry’s work in the red zone on Day 3 of the East West Shrine Bowl practice.  Note the second throw with the pump on an out and up that ends with a nice back shoulder throw and as well as his ability to use his legs to make a play:

When asked which current NFL QB he would look to emulate, Perry (who grew up in the Boston area) answered with Tom Brady, but not for the reasons you might expect. He talked about the fact that Brady isn’t the most talented or mobile QB and doesn’t have the greatest arm strength compared to other QBs but has reached the elite level by perfecting his game:

“I find that’s not the reason he’s not as good as them. That’s the reason why he’s better than them — that he doesn’t have those things and is able to continuously put the ball on the right spot. So I think, you know watching his consistent mentality when he is down 27-3 and continues to execute the game the way he would, no matter what case was. So, that’s really admirable.”

As far as his preparation for the draft, Perry will be busy. He is currently training with Coach Ken Mastrole in Fort Myers, Florida. He works with about 11 FCS receivers and throws three days a week. His priority is improving accuracy because he knows “the windows get much smaller in the NFL”. He understands that he needs to be able to turn plays where these great defenders cover deep routes into positive yards underneath. He defines that enhanced accuracy as a product of three things: understanding the play in and out, physically throwing accurate balls and then constantly being in a balanced position to be able to do that. That last factor includes attention to technique, not striding too far or keeping his front shoulder closed. He expects his 40 time will be in the low 4.5 range, which would be faster than Russell Wilson (4.55), Patrick Mahomes (4.8), Josh Allen (4.63) or Justin Herbert (4.69) clocked at the NFL Combine.

As far as his future beyond playing football, EJ Perry hopes to coach, like his father and grandfather and so many of his uncles. He already has some experience from time spent volunteering at his father’s youth training camps. But first, Perry has a goal to join an NFL roster and score touchdowns.