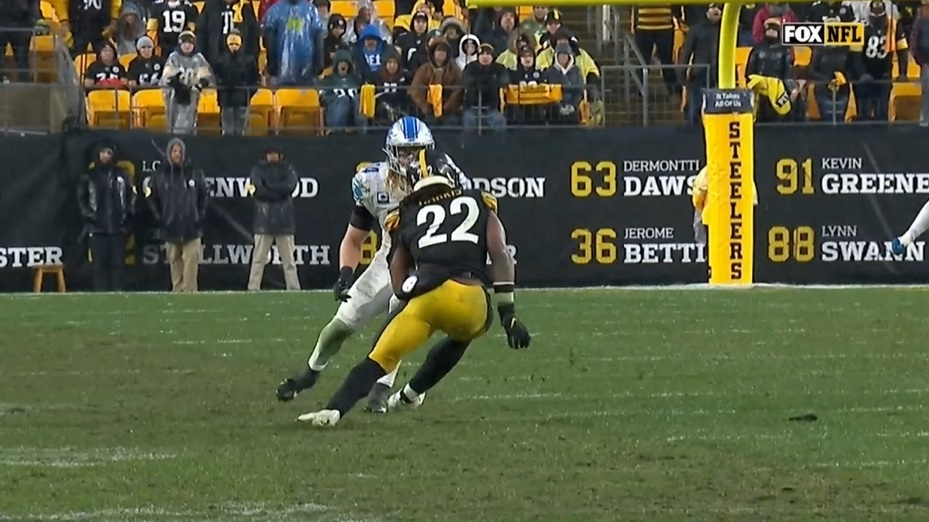 The Rams will start with three receives in a bunch to the left and a tight end in the slot to the right. The running back is to the left of the quarterback who is in shotgun. Baltimore is in their nickel defense and will play a Cover 6 Zone which has one player deep on the right side and two players deep on the left.

Prior to the snap, Cooper Kupp (10) will go in motion to the right and line up inside of tight end Tyler Higbee (89) that is in the slot. The defense will shift toward that side but no one goes with Kupp signaling the coverage will likely be Zone. To the left side Odell Beckham (3) will run a whip route breaking to the outside and then back inside. Van Jefferson (12) will run what looks like a curl but he spins and break so the post. Running back Sony Michel (25) will swing out to the left.

On the right Higbee will run a deep out drawing the corner Tavon Young (25) and the safety to that side, Chuck Clark (36). Kupp will delay his release which allows Clark to widen with the deep route. This leaves linebacker Patrick Queen (6) covering Kupp who will use a jab to the outside before breaking inside on the post. Queen is a very good athlete but he is mismatched against Kupp. The result is an 18 yard score.

Steelers Scenario – Diontae Johnson is the quickest with his moves so he could play the Kupp role but he could draw to much attention so put him on the whip route with Chase Claypool running the post on the left. Ray-Ray McCloud runs the Kupp route and should be able to win easily versus a linebacker. If not the swing to the running back is open.

Los Angeles is in the same alignment with three receives in a bunch to the left and a tight end in the slot to the right. The running back is to the left of the quarterback who is in shotgun. The Ravens will play Zone coverage with two deep safeties.

Just like the first play, Kupp will go in motion to the right prior to the snap and settle inside of Higbee who is in the slot. This time to the left Ben Skowronek (18) in the front of the bunch and he will run and corner route and draw two defenders. Beckham will release under him and break on an inside route and will have Queen in his area.

On the right side, this time Kupp will not delay his release accelerating up field before curling back inside. He is covered by linebacker Tyus Bowser (54) who dropped into coverage and cornerback Young. This allows Higbee to run a dig route behind Bowser and in front of the safety into the open area in the middle of the field. The result is a fifteen yard gain.

Steelers Scenario – This time I want to use Johnson in the Kupp routed to draw the attention. Chase Claypool can run the shallow in breaking route and McCloud on the corner route. With Johnson running the curl you can use Pat Freiermuth on the Dig route in the middle of the field.

The Rams are in the same alignment just reversed with three receives in a bunch to the right and a tight end in the slot to the left. The running back is to the right of the quarterback who is in shotgun. Baltimore is once again in their nickel defense but this time will play Man coverage with one safety deep.

Prior to the snap, Kupp will motion to the left but this time Jimmy Smith (22) goes with him identifying Man coverage. To the left Higbee will run a deep out route covered by the safety Brandon Stevens (21). Underneath Kupp will get jammed by cornerback Smith before breaking inside near the seam. Beckham will run a shallow in route again but has Queen undercutting his route and Bowser is nearby in coverage. Skowronek will be covered by Clark and run a post route while again the running back runs a screen.

Skowronek is the play here and he runs a nice route. He will initially break to the inside to draw Clark near him. He’ll then turn to the outside looking like it could be a route to the sideline and uses physicality to create space before breaking back inside. Quarterback Matthew Stafford (9) will first read the safety and then look to his left before hitting Skowronek in stride at about 13 yards and he adds a couple to keep the drive moving.

Steelers Scenario – Use Claypool on the post route here. He has the size to use physicality to create the space and can win in a one on one situation with the safety. Again the check down is the swing pass. Knowing the Steelers offense all three of these plays would go to Harris out of the backfield.