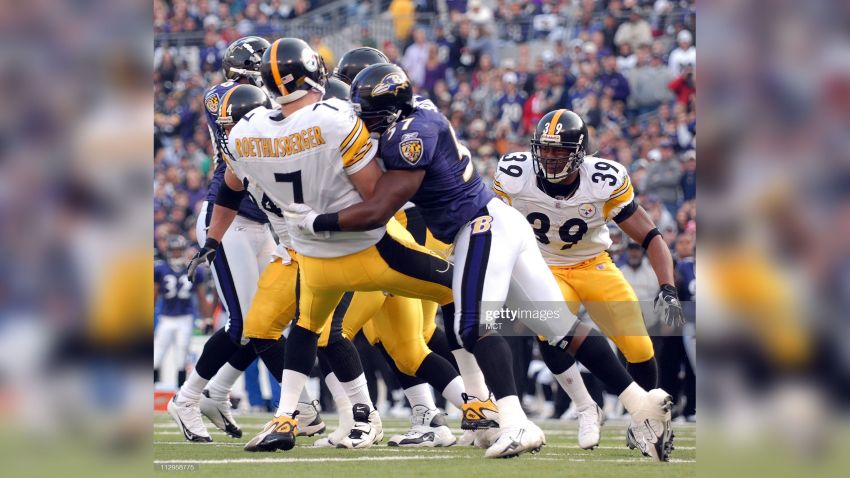 It’s still somewhat surreal to be coming to the end of the Ben Roethlisberger era of the Pittsburgh Steelers. Speaking personally, he has been the quarterback of my favorite team for a bit more than half of my life.

And he also defined one of the great rivalries in modern team sports, that being between the Steelers and the Baltimore Ravens, who are fittingly the final team he is likely to ever face1. A number of Ravens alumni shared their thoughts on the future Hall of Famer as he prepares to pay them one last visit—and no surprise, the comments of Bart Scott stood out.

“He’s the Michael Myers of football”, he said, referring to The Shape of Halloween horror film franchise fame, known for repeatedly being ‘killed’, only to mysteriously revive. “It’s almost hard for me to believe that this could be his last game because Michael Myers has always played that game. You thought you killed him, you think you knocked him out of the game; he may lay there, but he usually gets back up”.

Scott was an undrafted free agent out of Southern Illinois in 2002. He played the majority of his career, his first seven seasons, in Baltimore before signing with the New York Jets in free agency in 2009. And he hates Roethlisberger to this day—respectfully—for how the Steelers kept him back over the years.

“I went to three AFC championships in a row and he stopped me from going to the Super Bowl in two of them – once as a Raven and once as a Jet”, he added. “So I genuinely do hate him. But that’s the greatest sign of respect. I only hate him because of how he played and what he took from me. Ben, I hate you. I’m glad you’re done”.

Scott was a great Raven who also helped to define that rivalry for a number of years and played in some iconic games, like the 2008 AFC Championship Game to which he referred. Two years later, as a Jet, the Steelers beat him in the conference finals a second time. Three years in a row, he came within one game of reaching the Super Bowl. Twice, it was Roethlisberger and company who kept him out.

1Unless they can beat the Ravens while the 2-14 Jacksonville Jaguars also beat the 9-7 Indianapolis Colts, and the Los Angeles Chargers and the Las Vegas Raiders do not tie one another. The Chargers and Raiders would both advance to the postseason through a tie if the Colts also lose to the Jaguars. The Colts game is at 1 PM, and the Chargers-Raiders game is at 8:20 PM, so they would obviously know whether or not they need to win by the time they kick off.