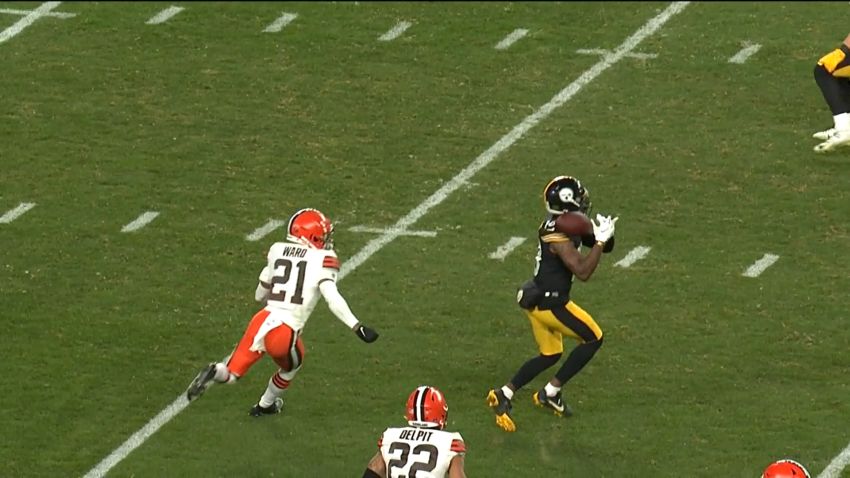 Reasoning: Aside from the fact that he was just placed on the Reserve/COVID-19 List, likely ending his 2021 season, Johnson has not closed out the season the way that he wanted to in terms of playing error-free ball, dropping two passes on Monday, even if he finished the game with a touchdown.

For most of the season, Diontae Johnson was one of the most reliable high-volume players in the NFL. That was a huge deal given the fact that he led the league in dropped passes a year ago. Depending on who’s math you follow, he spent a long stretch of the year with only one drop, or even no drops at all, but he’s put a handful of passes on the ground in recent weeks, and he had a second ugly fumble on top of that.

On top of that, he also slipped and lost his footing on a key third-down pass that resulted in an incompletion that likely otherwise would have been a reception that moved the chains. Quarterback Ben Roethlisberger was visibly frustrated after that play.

Prior to the game, the broadcast said that he messaged Johnson during the week, telling him he’s going to need him to make plays for him in this one, being his final home game. Outside of the touchdown pass that he did catch, the only skill position player that really made plays for him was running back Najee Harris, with his legs. Roethlisberger’s targets really didn’t do him any favors in his last hurrah at Heinz.

And now he’s on the Reserve/COVID-19 List, almost sure to miss the final game of the season. Still, that doesn’t take away what he did accomplish this year, which is notable. In 15 games, he caught 100 passes for 1,110 yards and eight touchdowns, all of those numbers marking career-highs. It is his first 100-catchseason (just the fourth player in team history to do it), and his first 1,000-yard season. And he still dropped way fewer passes than he did last year. According to Pro Football Focus, his drop rate is the same as Cooper Kupp’s, 14th overall among qualifying wide receivers.