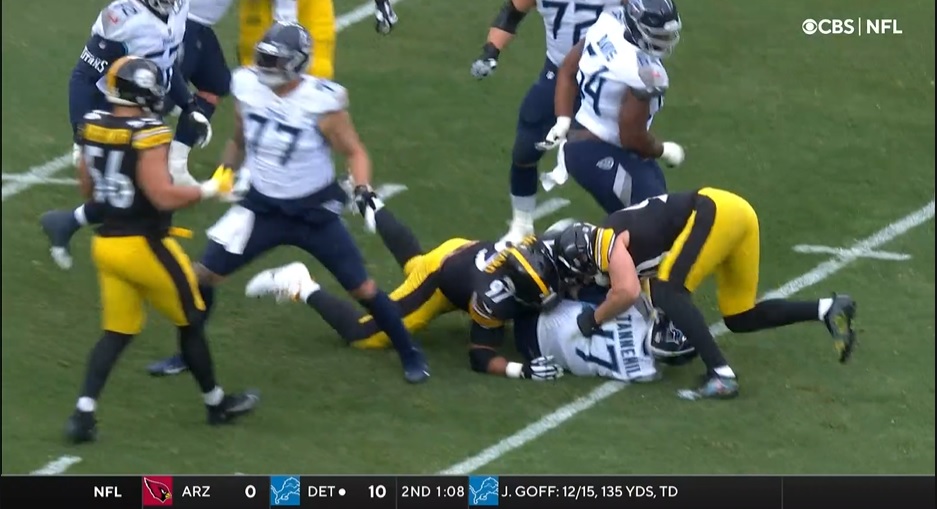 TJ Watt says he doesn’t care about stats. Just wins. And despite setting a Pittsburgh Steelers’ franchise record with 17.5 sacks this season, Watt isn’t sitting on his laurels about the feat. He’s now figuring out how to slow down Patrick Mahomes next Sunday.

Speaking with reporters following Sunday’s win over the Tennessee Titans, Watt had little to say about his new record.

“It’s a great accomplishment,” Watt told reporters in audio provided by the team. “It’s a historic franchise that we have here. But there’s so much work to do that I can’t really stop and think about stuff like that. Just finished the game, got a win. But it means nothing if we don’t handle businesses next week. So I gotta break down the film, have a good week of practice and get to Kansas City.”

Watt broke James Harrison’s 2008 mark with 1.5 sacks Sunday. Initially, he was not given credit for a first-half, third down sack, a play in which two Titans’ blockers held him, but later in the game the official stat sheet split the sack between him and Cam Heyward.

Watt is up to 17.5 sacks this season. He remains a frontrunner for Defensive Player of the Year and still has a chance to threaten Michael Strahan’s official mark of 22.5 (Detroit’s Al Baker has the unofficial record at 23.0). He’s done it playing through multiple injuries and a COVID diagnosis. Even in today’s game, he gutted out a rib injury on the final drive, missing only a play or two before putting himself back in the game.

After Watt’s record-setting moment, the Steelers’ Twitter page posted a video of James Harrison congratulating Watt on breaking his mark. Harrison himself encouraged Watt to go after the NFL record.

But to hear it from Watt, he doesn’t care how many sacks he finishes the season with so long as the Steelers win. Of course, when Watt takes down the QB, the Steelers’ odds of winning improve. In 2021, they are 6-2-1 in games where Watt has at least one sack. They’re 1-4 in games in which he does not or failed to play.