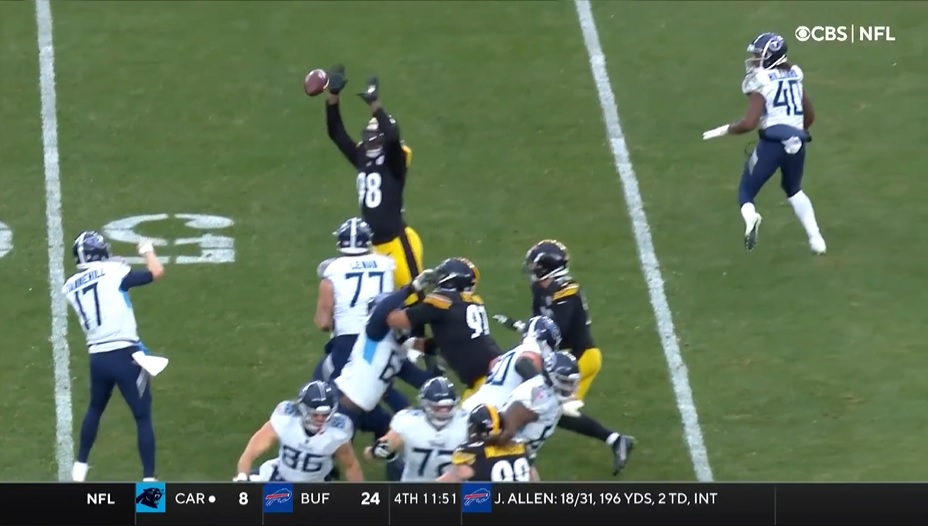 The Pittsburgh Steelers had four takeaways in Sunday’s win against the Tennessee Titans. All four were critical to Pittsburgh’s second half comeback, outscoring Tennessee 16-0 in the second half thanks to a bunch of field goals, a QB sneak, and those turnovers.

The only interception the team had came thanks to Taco Charlton and Joe Schobert. On 3rd and 3 at the Steelers’ 42 midway through the fourth quarter, Charlton deflected Ryan Tannehill’s pass into the air. Schobert found it and picked it off, running it back 23 yards to the Titans’ 31. It set up Chris Boswell’s 46 yard field goal to give Pittsburgh their first lead of the game, one they would not give back.

“Obviously I could tell by his drop that the ball was coming out quick,” he told reporters in audio provided by the team. “I wouldn’t have time to get there. So at that point I could play his eyes. So I played his eyes, got the tip, kind of knew I batted it up and it didn’t go too far. So I turned back and next thing I know Joe has it heading our way. So at that point I just tried to get a block and see what we could do with it. But I mean, I’m happy he was there. We were able to get that. That was a big turnover in the game and it kind of changed the favor going our way.”

Three of the Steelers’ four turnovers came in the second half, including that one. Though the offense did little with it, those plays set them up in good field position for four Chris Boswell’s field goals. Crucially, three of those four turnovers came on third down, Charlton’s tipped pass being one of them. So not only did they put the ball in Steelers’ hands, they prevented the Titans from moving the sticks on possession downs.

It’s unusual for the Steelers to have an EDGE rusher as tall and long as Charlton. Coming out of Michigan, he was viewed as a classic 4-3 defensive end. In fact, it’s one of the main reasons why the Dallas Cowboys drafted Charlton over TJ Watt, viewing Charlton as a more natural fit with his hand down. But Charlton has handled playing on his feet well, doing the same in Kansas City and Miami before Pittsburgh signed him earlier this season.

Though Charlton has his warts, his pressure rate has been solid and he’s looked comfortable playing out in space. He’s turned into important rotational depth following the Melvin Ingram trade. Ingram was still the better and more valuable player but Charlton’s reduced the sting of that trade just a bit. And he made a heck of a play Sunday to give the Steelers a lead in a much-needed win.