Today I wanted to look at some data for the season, discuss takeaways for the Pittsburgh Steelers Week 13 matchup against the Baltimore Ravens on Sunday afternoon, and pose some questions for you the readers.

First, let’s look at the quarterbacks using the following data from Next Gen Stats: 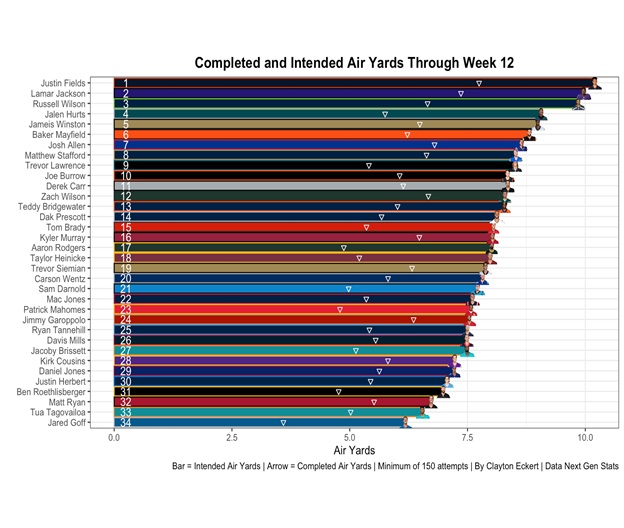 The bright side to Jackson’s impressive air yards for Pittsburgh is that he holds the ball longer than most quarterbacks: 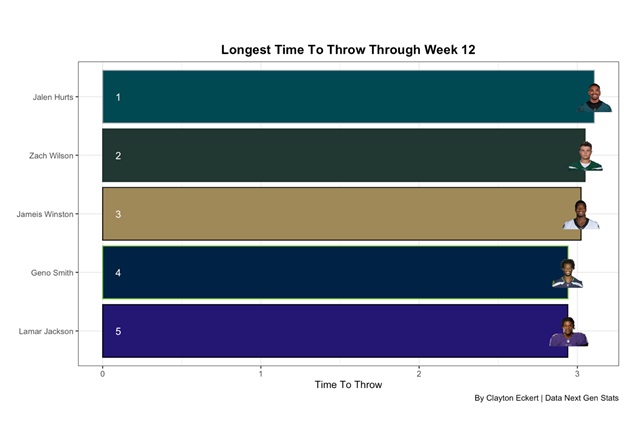 This highlights an opportunity for the Steelers defense to hopefully capitalize in the sack department, considering Jackson has been sacked 30 times this season which is tied for third most in the league! In comparison, Roethlisberger has the second fastest time to throw number and has been sacked 24 times. Jackson’s running ability will of course be a challenge for Pittsburgh’s defense who has struggled against mobile quarterbacks, so it will be interesting to see how the defense fares in this regard with a rare quarterback that has 707 rushing yards, one less yard than Steelers running back Najee Harris and ranks 9th in rushing overall in the league!

Next let’s look at completion percentage and air yards to the sticks, along with passing stats: 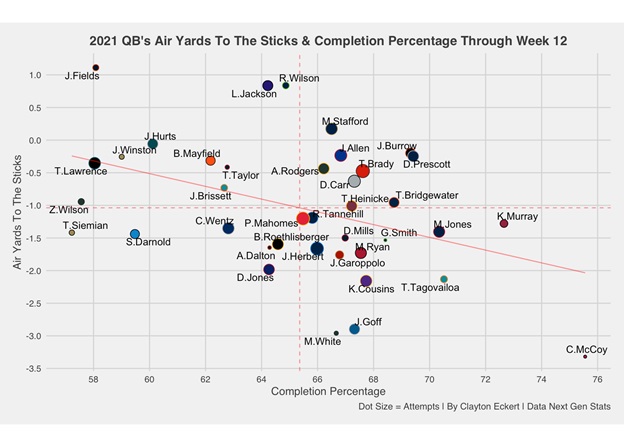 How do you think the quarterbacks will fare on Sunday? 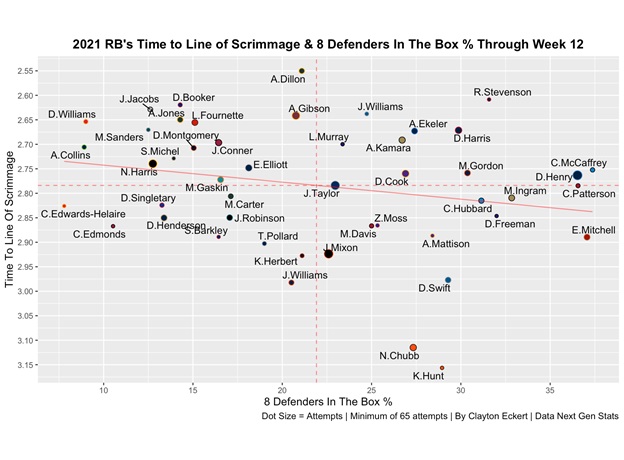 The Ravens have had poor luck with injuries, and the running back position is no exception. With running back J.K. Dobbins on injured reserve, Baltimore chose to sign former Steelers running back Le’Veon Bell to cushion the injury battered position group which didn’t work out well. As the season progressed, running backs Devonta Freeman and Latavius Murray have carved out the primary roles in the backfield.

Freeman lands on the right of the graph, below the mean in time to line of scrimmage and highlights him seeing eight men in the box at the sixth highest rate in the NFL! This provides extra context to the 324 yards he has accrued on 75 attempts for a 4.3 yards per attempt average, along with maximizing his 18 receptions on 20 targets for a 90% catch rate and 125 yards. Murray lands at the top middle of the graph, highlighting his straight ahead running style with a time to line of scrimmage number that ranks 15th in the league and just above the mean in seeing eight defenders in the box, with 258 yards on 77 attempts and a lower 3.6 yards per attempt.

Steelers running back Najee Harris lands on the top left of the graph, with an above average time to line of scrimmage number that ranks 19th. The percentage he has seen stacked boxes has slightly increased, but still sees eight men in the box at a low 12.8% rate which is seventh least in the NFL. Harris has 708 rushing yards on 196 attempts with a 3.6 yards per attempt average. He also has the second most running back targets at 67 with 52 receptions for a 77.6 catch percentage and 351 yards.

How do you think the running backs will perform in this game?

For the wide receivers, let’s look at a matchup view with the following data points: 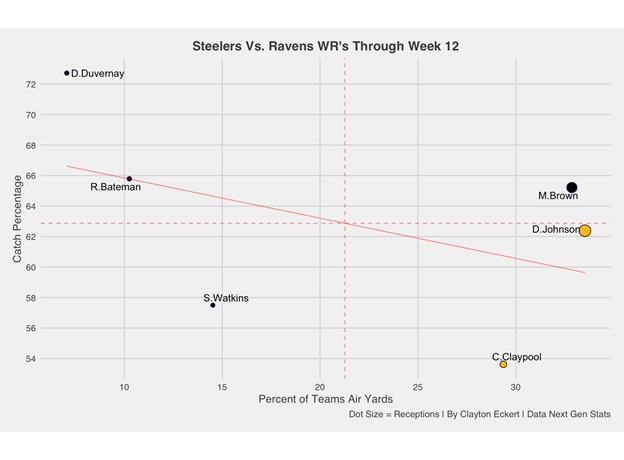 Steelers wide receiver Diontae Johnson leads the position in targets (109), receptions (68), yards (809), and percent of teams air yards (33.5%) along with four touchdowns and a 62.4 catch percentage. Here’s to hoping he has another strong game to add to his impressive season against the Ravens secondary who have five cornerbacks listed as questionable for the contest! Fellow wide receiver Chase Claypool ranks third in percent of teams air yards (29.4%), targets (69), receptions (37), and yards (608), with one touchdown but the lowest catch percentage (53.6%).

Wide receiver Marquise Brown highlights the Ravens position group with a similar percentage of teams air yards to Johnson, and also ranks second on the graph in targets (92), receptions (60), and yards (770) but has the most touchdowns (6) and a 65.2 catch percentage. The Steelers defense will have a lot to account for, but the secondary will need to limit Jackson’s connection with him, especially downfield explosive plays which will likely be a big key to the outcome of the matchup, and a challenge considering Steelers cornerback Joe Haden will miss another game with his foot injury.

Which wide receivers will excel in the matchup?

Next let’s look at a similar view for tight ends, but league wide: 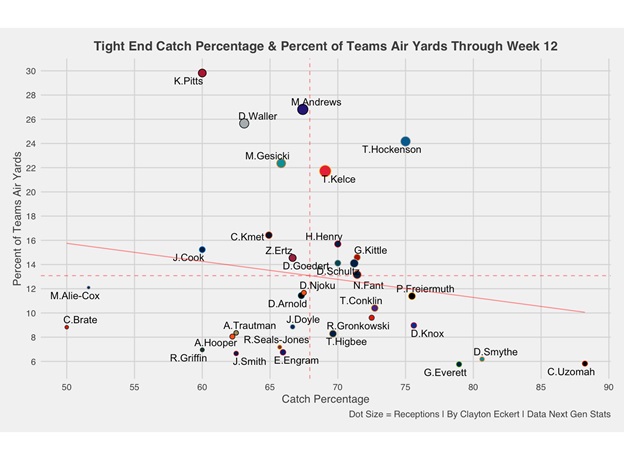 Right away we see Ravens tight end Mark Andrews at the top of the graph with the second ranked percent of teams air yards, garnering nearly as many targets as Brown with 89! He is basically another primary receiver, so the Steelers defense will have to pick their poison in their strategy with Brown and Andrews in coverage along with not losing quarterback contain on Jackson. Andrews ranks second amongst tight ends in receptions (60), and yards (761), with five touchdowns and a 67.4 catch percentage.

Steelers tight end Pat Freiermuth lands on the lower right of the graph, highlighting his fifth ranked catch percentage of 75.5% and a lower percent of teams air yards at 11.4%. Freiermuth now has 53 targets, 40 receptions, 327 yards, with an impressive six touchdowns which ranks 3rd in NFL!

How will the tight ends fare?

Here’s a look at the offensive lines for the matchup with Pro Football Focus blocking grades: 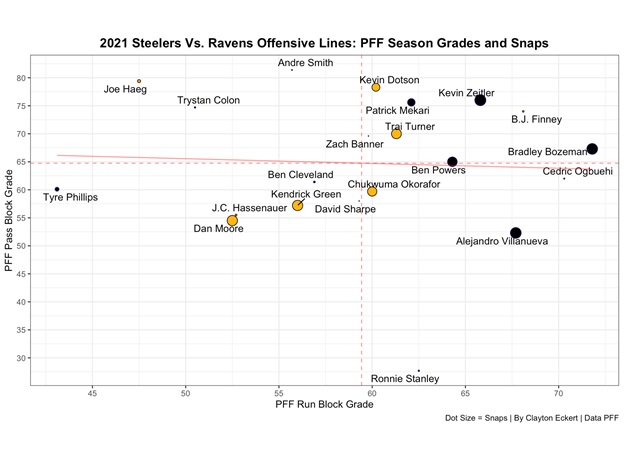 Both squads have had injuries at the position, highlighted by the snap counts with the dot sizes. Ravens center Bradley Bozeman tops the run blocking grades for the matchup, but his 71.8 grade highlights the lack of strong play for either team according to the PFF grades on the season. Baltimore guard Kevin Zeitler lands high in the pass blocking department with a 76 grade. Fellow guard Ben Powers has an above the mean run block grade and right at the mean for the players in pass blocking. Baltimore tackle Patrick Mekari grades well as a pass blocker and above the mean run block grade but is questionable for the game, and it will be interesting to see who plays the right tackle spot considering the fantastic news that T.J. Watt was activated from the COVID list Saturday morning. Ravens left tackle and former Steeler Alejandro Villanueva has a surprisingly higher run block grade (67.7) considering his past reputation as a stronger pass blocker with a 52.3 grade! It will be very interesting to see how Steelers linebacker Alex Highsmith fares in the matchup.

Pittsburgh’s offensive line lacks a strong PFF grade in the running game, with guard Trai Turner leading the group out of the starters at 61.3. Steelers guard Kevin Dotson leads the starters in run block grade but is on injured reserve with J.C. Hassenauer along with Joe Haeg on the COVID list, highlighting B.J Finney getting the start at left guard last week and faring well overall on his limited snaps this season. Steelers tackle Chukwuma Okorafor lands just above the mean for run blocking, with center Kendrick Green and tackle Dan Moore below the mean in both blocking grades.

Which offensive line will win the battle of the trenches?

Last let’s look at the defenses: 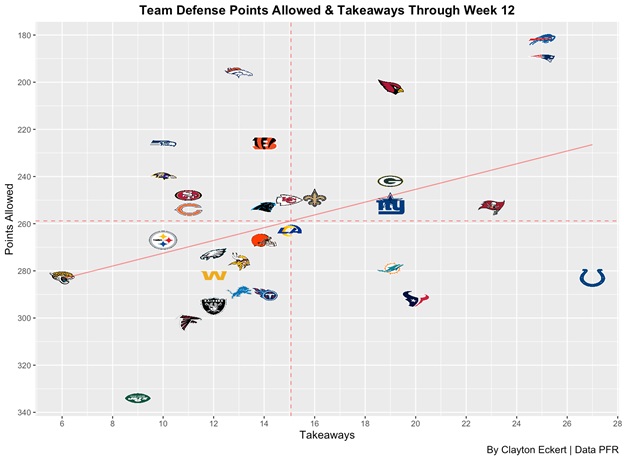 The Ravens land on the left of the graph and have the 7th ranked defense in points allowed! If this stat holds true it could be a key factor in the game against the Steelers offense that has been struggling to put up points. Calais Campbell is having another impressive season on the Ravens defensive line, linebacker Tyus Bowser is the team sack leader with 5.5, linebacker Patrick Queen leads the team with 62 combined tackles, and Marlon Humphrey (questionable) has 13 passes defended which is tied for fourth in the NFL.

The Steelers defense is 19th in points allowed and they are currently tied with the Ravens in takeaways at the third lowest rate in the league. It will be interesting to see how they fare without Haden, defensive lineman Isaiah Buggs, possibly fellow lineman Cameron Heyward and Isaiahh Loudermilk who both missed Friday’s practice due to illness, along with linebacker Robert Spillane on the COVID list. Here’s to hoping the Steelers can win the takeaway and points allowed battle to hopefully contribute to a win on Sunday.

Who do you think will come out on top in the crucial division matchup? Thanks for reading and let me know your thoughts in the comments!