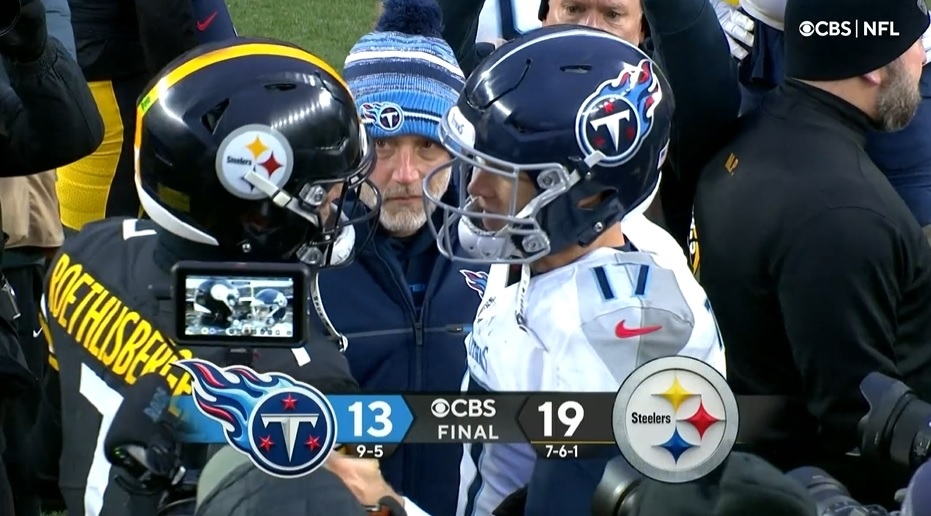 Though still on the outside looking in on the playoffs at the moment, the Pittsburgh Steelers continue to climb up the NFL’s power rankings coming off of a key win over the Tennessee Titans in Week 15 at Heinz Field.

Sunday’s 19-13 win over the Titans in a pivotal AFC matchup wasn’t pretty by any means, but a win is a win, and the Steelers keep stacking them down the stretch as they push towards the playoffs.

Don’t count out the Steelers just yet.

“‘I think we still have a pulse in this thing.’ Ben Roethlisberger’s postgame comments seemed to bolster our theory that the Steelers are a zombie that doesn’t know it’s dead yet. Mike Tomlin’s team continues to lumber mindlessly through the NFL landscape,” Hanzus writes. “These Steelers crash through barricaded doors, feast on the occasional arm, tumble down the unexpected hillside — only to get back up in their eternal quest for … not brains, but an unlikely playoff bid. Pittsburgh beat Tennessee thanks to a defense that forced three turnovers in the span of 10 plays and a kicker who converted four of his five field-goal attempts in a 19-13 win. There’s nothing pretty about the undead, but they demand to be taken seriously.”

The Steelers certainly do demand to be taken seriously down the stretch, needing to go 2-1 in the final three games against the Kansas City Chiefs, Cleveland Browns and Baltimore Ravens to find themselves in an ideal position to make the AFC playoffs.

It hasn’t been easy all season for the Steelers, who sit at 7-6-1 on the season. Every week has been a challenge offensively and defensively, but there is something to be said for a team that has to find a way to win week after win and pull out wins in tight contests. Pittsburgh isn’t to be considered a contender by any means, but if they can replicate their performance against the Titans down the stretch, they should be in the playoffs once again under head coach Mike Tomlin.