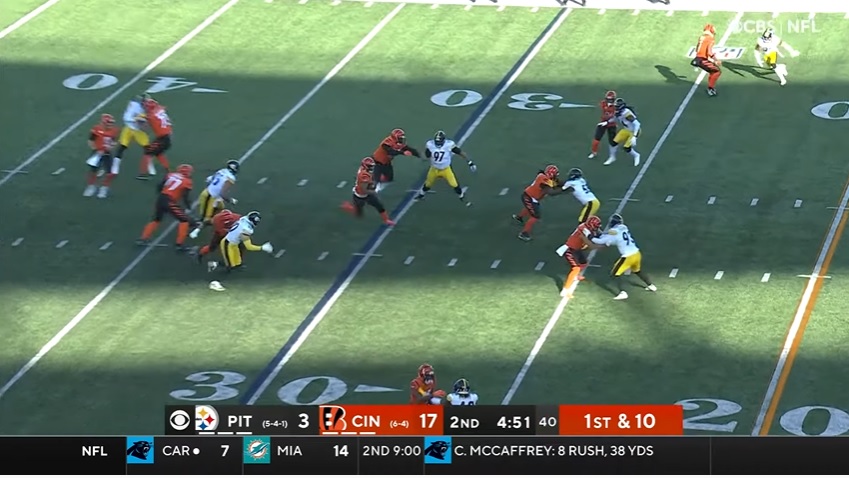 In what I’m sure is your biggest worry following the Pittsburgh Steelers’ 41-10 beatdown Sunday, where are they at in the latest power rankings? Surprisingly, they didn’t fall as far as you might think. But NFL.com Dan Hanzus’s didn’t have anything kind to say about the team following their Week 12 loss to the Cincinnati Bengals.

In his latest power rankings, Pittsburgh fell two spots from 19th to 21st. Here’s what Hanzus wrote about the team.

“After years — decades, really — of battling it out with the Ravens while beating up on bumbling also-rans in Cleveland and Cincinnati, the tables have turned. There are no more gimmes for Pittsburgh. The Bengals reminded them of that in the rudest way imaginable on Sunday, building a 31-3 halftime lead before coasting to a 41-10 win to complete a punishing season sweep.

“The Steelers are plainly, painfully ordinary: They have a defense that is typically good but rarely great, and a middling offense led by a veteran quarterback who looks ready for the exit door. A playoff push is still within reason, given the wide-open nature of this NFL season, but the true reality here is impossible to ignore.”

The Steelers are on a three-game losing streak to the Bengals for the first time in 30 years. Not only did Pittsburgh lose to this team, but they failed to even show up, down 31-3 at halftime as Cincinnati coasted the rest of the way. The Steelers failed in all areas. Offensively, they were a mess, only buoyed by garbage time yards, first downs, and a late touchdown. Defensively, Joe Mixon and company ran all over the Steelers’ front to the tune of nearly 200 yards. They would’ve hit that mark if the game was remotely competitive.

Hanzus’ assessment of the team is harsh but all too accurate.

Pittsburgh is now 0-2-1 over their last three games, fading fast in a competitive AFC North and conference as a whole. It makes Sunday’s game against the Baltimore Ravens a must-win to have a chance this season. Around the division, the Cincinnati Bengals grab the top spot in Hanzus’ rankings despite still being behind Baltimore in the standings; the Bengals are seventh, the Ravens are ninth. The Cleveland Browns are also ahead of Pittsburgh, grabbing the 16th spot.

Around the league, the Green Bay Packers jumped the Arizona Cardinals to grab the top spot, with the top three teams being represented by the NFC: Green Bay, Arizona, and Tampa Bay. The Kansas City Chiefs are the first AFC squad, bouncing back after an iffy first half of the season, now sitting at 7-4.

The Detroit Lions remain last in the league, the only winless team at 0-10-1. We all know who that tie was against.