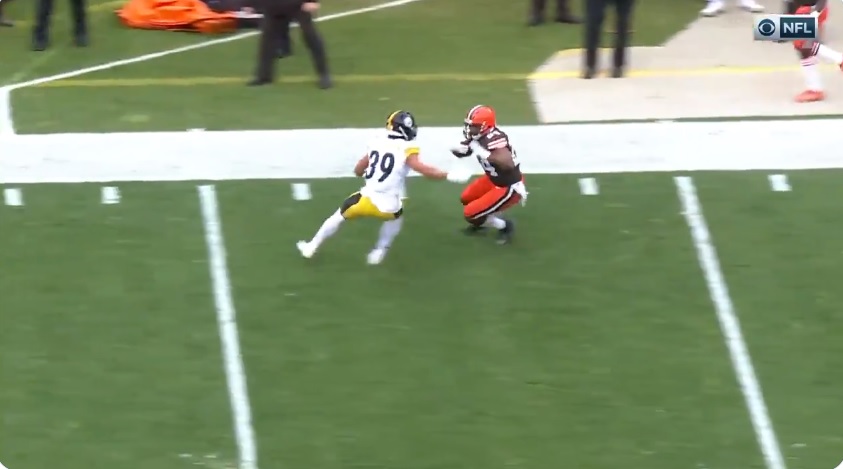 It’s no secret what the Cleveland Browns do better than most in the NFL: Running the football down the defense’s proverbial throat.

It’s also no secret at this point in the 2021 NFL season what the Pittsburgh Steelers’ defense struggles to do more than more: Stopping the run.

Monday night’s regular season home finale for the Steelers against the Browns at Heinz Field will pit Cleveland’s No. 3 rushing attack in football against the NFL’s 32nd-ranked run defense.

The last time the two teams squared off on Halloween, the Steelers held the Browns in check on the ground, limiting Cleveland to just 96 yards and one touchdown on 23 carries in a then-pivotal 15-10 win inside FirstEnergy Stadium on the shores of Lake Erie.

Now, ahead of the Week 17 matchup the Steelers’ run defense has regressed mightily, while Cleveland is coming off of a dominant performance on the ground against a tough Green Bay Packers defense on Christmas, setting up a pivotal AFC North battle at Heinz Field in front of a national audience.

To win the huge divisional game in what could be Ben Roethlisberger’s final home game in his Steelers’ career, Steelers’ defensive captain Cameron Heyward says the Steelers are emphasizing winning early downs — specifically first downs — against the Browns’ rushing attack to take them out out their rhythm and game plan, similar to what they did in the win on Halloween.

“We were playing Nick Chubb after he got hurt. Then he was coming off injury, and they just seem like they’re becoming more cohesive,” Heyward said to reporters Friday, according to audio provided by the team. “they’re doing things a lot more, and doing things in stride, but, now they have three-runner mix. All are really good; Kareem Hunt, Johnson, Nick Chubb. You really gotta make sure you win first down to really help help yourself on the back end.”

The Steelers certainly did a good job winning on first down in the Halloween matchup on the road, but as Heyward alluded too, the Browns were just getting Chubb back from injury, while Hunt missed the game due to his own stint on injured reserve. It looks like Hunt could miss the Monday night game at Heinz Field with another ankle injury that he suffered in a Week 14 win over the Baltimore Ravens, so that leaves Chubb and Johnson once again, a familiar 1-2 punch the Steelers know all about.

Winning on first down will put the Browns behind the chains consistently, forcing them to try and throw the football with Baker Mayfield, who has struggled mightily all season long and had his worst performance of the year against the Packers on Christmas Day, throwing four interceptions.

By winning on first down, the Steelers give themselves a greater chance of winning against a tough Browns team. Failing to win at a high rate on first down could be disastrous though as Chubb, Johnson and the Browns could truly have a field day on the ground against this porous run defense.