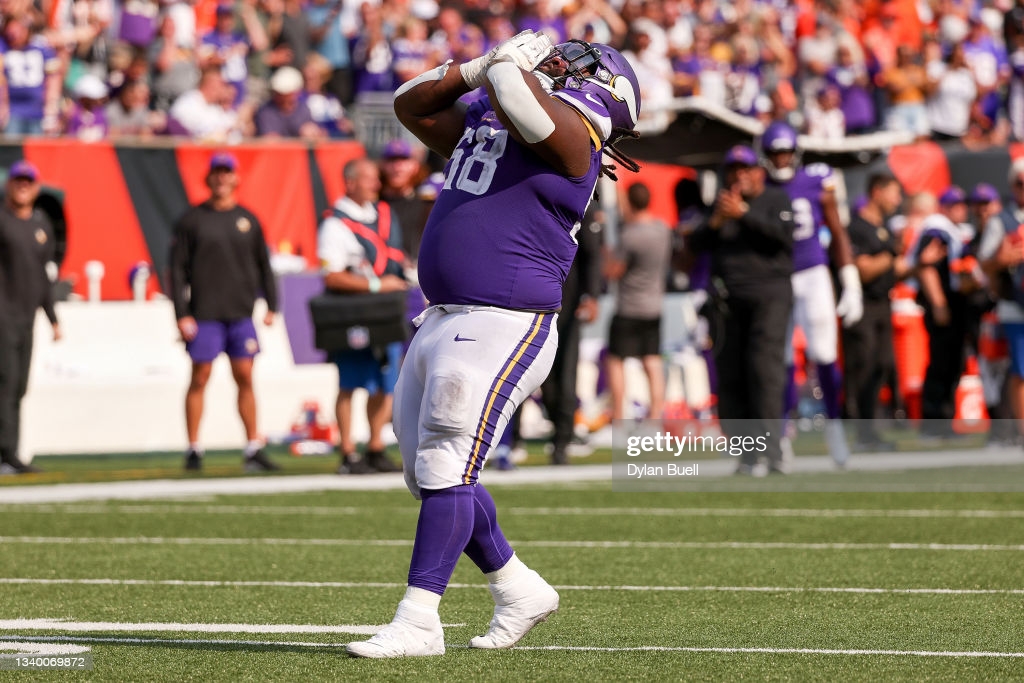 It’s a strange one, as the title suggests. Overall, it’s been a very poor unit, ranked 31st in the league allowing 4.7 YPC. Only the Steelers are worse. They play a 4-3 front, as they have for seemingly decades now. Dig a little deeper though and the numbers are interesting, a Simpson’s Paradox of sorts. Here’s what I mean. They’ve allowed 34 runs of 10+ yards, which is tied 15th in football. And they’ve allowed only five runs of 20+ yards, eighth best in the league. So those numbers are actually pretty positive, they aren’t allowing big runs, and yet their run defense is so poor.

What’s super interesting are the death by 1000 papercuts. The five to nine yard runs. Minnesota has allowed 103 of those this season, third most in the league. Which is all to say, the Vikings are allowing a lot of small runs and not a lot of big runs. In theory, the Steelers should have a successful run rate in this game. But Minnesota has talent up front, big pluggers like Michael Pierce and Dalvin Tomlinson. Pittsburgh’s best bet might be more of a perimeter running game out on the edges, especially with the Vikings not having their top guys there. Example of it from the Lions’ game last week.

One note here is Sheldon Richardson, normally a 3T, has been playing on the EDGE more often to compensate for losses of Danielle Hunter and Everson Griffen. He can make an impact out there especially matched up on a tight end, like here. Watch #90 defeat the TE cut block and make the tackle.

Some other defensive stats. They’re 25th in points per game allowed, averaging 25.4. Minnesota has allowed 29+ points in three straight games and 29+ in four of their last five. Their leading tackler is Eric Kendricks with 109 of them while their safeties are highly involved. Harrison Smith has 78, Xavier Woods has 74. Smith is still one of the better box SSs in the league.

A group who hasn’t been great overall in terms of coverage. They’re allowing 7.8 yards per attempt, 28th in football, while allowing 50 completions of 20+ yards. They have done a good job of not allowing double-explosive plays, just six of them going for 40+. Similar to their offense, they give up the middle/intermediate routes. Their third down defense is 7th best in football at 36.1% while their red zone defense is bottom third, allowing offenses to find the end zone exactly two-thirds of the time.

Where they are strong statistically is sacks. The Vikings rank second with 36 sacks this season, only behind the Steelers. But there’s some context worth pointing out. Their top two sack leaders won’t play in this game, Danielle Hunter nor Everson Griffen. The good news is the Vikings get pressure from a lot of sources. 14 players have at least one full sack this year and ten of those sacks come from non defensive linemen. LB Eric Kendricks is tops in that regard.

True to form, Mike Zimmer will sugar the A gaps with their LBs, stressing protection. Sometimes they rush, sometimes they drop out.

There’s also a “Rain” call when they do blitz for the LB who rushes is the one away from the center’s turn/slide. Najee Harris will again need to be strong in pass pro. The TE stayed in here so the blitz didn’t work out with the LG able to pick him up but that’s the principle of the call.

Here, watch Smith (#22) ROBOT the underneath crosser as he works across the field toward the bottom of the screen. Forces underneath throw which Smith is able to rally and close upon.

After a big win versus division rival Baltimore the Steelers travel to Minnesota for a contest on Thursday night. This is the final game against the NFC North division and Pittsburgh is 1-1-1 against them this season. The Vikings give up points allowing at least 27 in their last three games.  Everson Griffen is out, Anthony Barr says he is in and Patrick Peterson is back from the Covid list.  They are near the bottom in rushing yards allowed but are second in sacks with 16 players having at least half a sack. Let’s take a look at their defense.

The Vikings have some bulk up the middle.  Michael Pierce (58) has recently returned from injury and is the 0/1 technique.  He has a thick lower half with sand in the pants. He has a good anchor, active hands playing with good pad level but is a two down player. Dalvin Tomlinson (94) is the 3 tech with good snap quickness and can control his gaps. He gets a solid push inside as a pass rusher and gets his hands up in throwing lanes.

The reserves include Sheldon Richardson (90) who can play defensive tackle or end and has good play strength versus the run, a solid bull rush and good hand placement. Armon Watts (96) filled in for Pierce nicely and plays with good pad level and solid lateral agility. He has a good punch and play strength to shed blockers. He is the co-leader of the active players in sacks with four.  James Lynch (92) has a high motor and good quickness along with good mobility while keeping his eyes in the backfield.

D.J. Wonnum (98) usually plays on the weak side, has solid play strength and can shed on the edge along with solid lateral agility but has a limited pass rush plan. He’ll rush from a stand up position inside on some passing downs.  Tashawn Bower (73) has good length, solid snap quickness and mobility and shows solid pursuit from the backside. He has inconsistent burst and solid hand usage rushing the passer.  He has some potential to be disruptive.

The reserves include Patrick Jones II (93) and he has good length, solid initial quickness and uses good hand placement versus the run while being a good tackler. Kenny Willekes (79) has solid burst and good acceleration to the quarterback.  He’ll use a bull rush or will come on a loop and is solid versus the run. Eric Yarbrough (66) is plays with good aggressiveness but is a bit erratic showing high effort with limited athleticism.

This is an athletic bunch that has dealt with injuries recently. Eric Kendricks (54) is the MIKE and is the leading tackler. He is quick through gaps, can get off blocks and flows to the ball well while having strong coverage skills. Anthony Barr (55) is the SAM with solid mental processing and plays strong on the edge to force the play inside.  He’ll be the linebacker in dime and has solid acceleration when blitzing. Nick Vigil (59) is the WILL and is a high motor player who chases everywhere. He reads his keys well, has solid mobility in Zone and is a strong blitzer.

Troy Dye (45) plays in the middle with good toughness and mental processing. He fills downhill, has good length and is solid special teamer. Blake Lynch (48) is a SAM linebacker and plays with speed and quickness to attack downhill, fill gaps and likes to hit. He is fun to watch. Chazz Surratt (41) is a WILL with very good athleticism to play to the sidelines, has good acceleration and a strong tackler. Ryan Connelly (57) has good mental processing, solid burst and aggressiveness and plays a lot on special teams.

The biggest name of this group is Patrick Peterson (7). He plays the right cornerback and has good athleticism and play strength. He’s a physical corner banging the receiver in coverage, has good change of direction and a good tackler. Bashaud Breeland (21) looks best in Press coverage and solid in Zone. He has solid physicality, good acceleration and battles through the catch point. Mackensie Alexander (24) plays mostly as the slot corner. He is a solid defender in Man coverage and has good change of direction in Zone. He has good quickness and plays screens well.

Veteran Harrison Smith was a free safety and now plays the strong safety. He has versatility to play in the box, slot or as a split safety. He has good mental processing and ball skills and willing gap filler versus the run. Xavier Woods (23) was very active in the games I watched and leads the team with eight pass break ups. He can play the single high safety, has solid range and attacks the ball in coverage.  He gets downhill quickly and is a strong tackler.

Camryn Bynum (43) has good size, can play close to the line of scrimmage or as a split safety deep.  He has good ball skills and is solid in Man coverage, can blitz in nickel and supports the run.  Josh Metellus (44) will play in dime and goal line defense either near the line of scrimmage or as the deep safety. Myles Dorn (46) has good size, shows good toughness and is a solid tackler and has played a lot the last month on special teams.

A fantastic interception from Bynum (43). He’s at the top of the screen and will read the routes and the quarterback to make a diving pick.