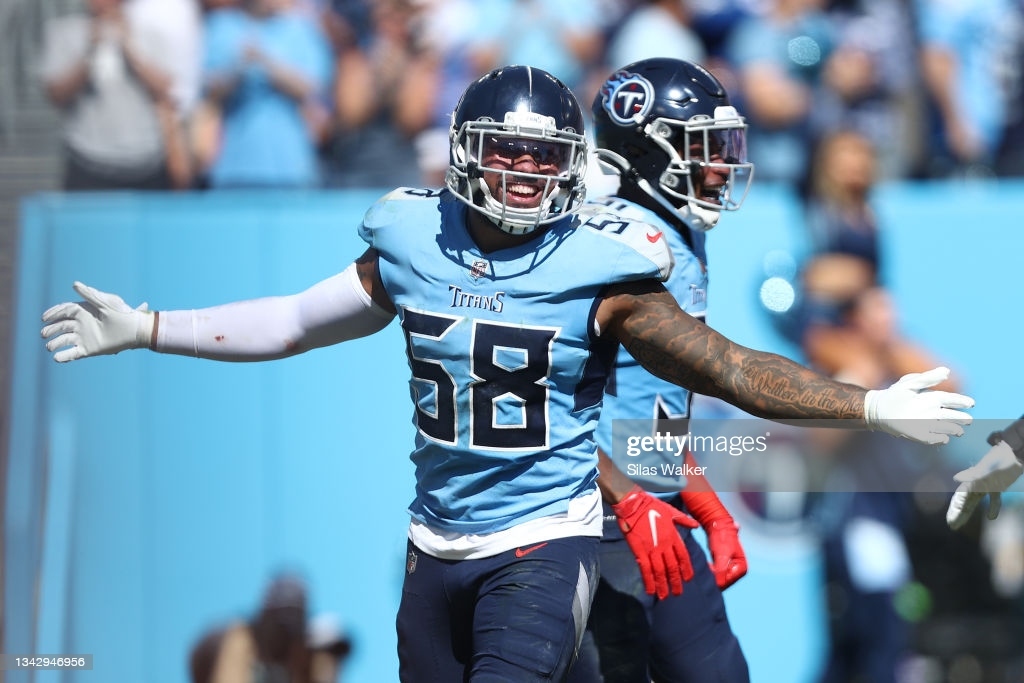 The Titans’ defense has been one of the league’s stingiest allowing just 4.0 YPC. That’s tied fifth best in football. It’s a 4-3 front that is strong and stout against the run. Not news the Steelers want to hear though they’ve struggled to run on defenses good and bad.

Like any defense, they will vary up their d-line approach between one and two-gapping. But the Titans seem to ask their d-line to two-gap more than most others, preferring to hold the point of attack and allowing their linebackers to run free. Here’s a couple of examples.

As I wrote, it’s a 4-3 front but they’ll show 5-2 looks on early downs. Formations and surfaces really blend together at this point. The Steelers are 3-4 but with both EDGE rushers on the LOS, it looks and functions like a 5-2. The Titans want to immediately win the point of attack and control the line of scrimmage, not creating any sort of run lanes for the opposition.

Safety Kevin Byard is the team’s leading tackler. A versatile player, he can line up in the box or play in centerfield. LB David Long is closely behind him followed by EDGE Harold Landry. Landry and DT Jeffrey Simmons are the two best players upfront. I like those guys because their stats and game is so well-rounded. Not just pass rushers. Landry has 63 tackles which shows he’s playing the run. Running to his side is dangerous because he will shoot and slant and win. Don’t get cute and run weakside with LT Dan Moore Jr. and think you’ll gain the edge.

The Titans did seem to struggle with pre-snap motion and fast flow at the snap. Maybe a chance to bounce the ball on the perimeter. I’d expect Pittsburgh to go back to the well with their crack toss as the Patriots did here.

They have given up just 24 runs of 10+ yards this season. That’s easily #1 in the NFL. And they’ve allowed just three runs of 20+ yards, tied for the fewest in football. So it’ll be tough sledding for the Steelers’ run game.

Some other defensive stats. 15th ranked defense at 22.3 points per game. They’ve allowed more than 22 points just once over their last five games and are coming off a shutout of the Jacksonville Jaguars last week. They’re allowing teams to convert just 38.7% of their third downs, 13th in the league, while their red zone defense is 53.1%, 9th best in the league. So pretty good group situationally.

Would call them slightly above average overall. They’re an aggressive group in terms of getting pressure and taking the ball away. They have 13 INTs this season, tied top ten in the NFL. And they have 32 sacks as a unit, also tied top ten. Byard is their leading ballhawk with five INTs and has consistently been one of the top interception guys year-after-year. But they have a bunch of guys who have taken the ball away. Their linebacking core has four interceptions combined this season.

From a pass rush perspective, Harold Landry leads the team with 11 sacks. Career-year for him. Jeffrey Simmons is second on the team with 7.5 sacks. He’s an underrated, interior wrecker. Tennessee has three defenders with 6+ sacks on the year. Their DBs only have one, a lone sack by FS Kevin Byard. Former Steeler Ola Adeniy is also having a big season with 2.5 sacks. He probably wants a little revenge this weekend.

Schematically, there’s a healthy mix of man and zone coverage. Against more condensed 2×2 sets on early downs, they play more zone coverage than man. Against 3×1, you get more man. In the low red zone, you get a heavy amount of man coverage so Matt Canada better dial up his man-beaters inside the five, especially on third down. Picks and rub routes and some creative routes with Diontae Johnson.

While their blitz rate is low, they are pretty creative and aggressive when they send extra guys. DBs get involved in the action. Watch both of them come off the edge on this 3rd and 7.

And they showed a double barrel “mug” look on third and ten, a look Pittsburgh struggled mightily with against the Vikings. 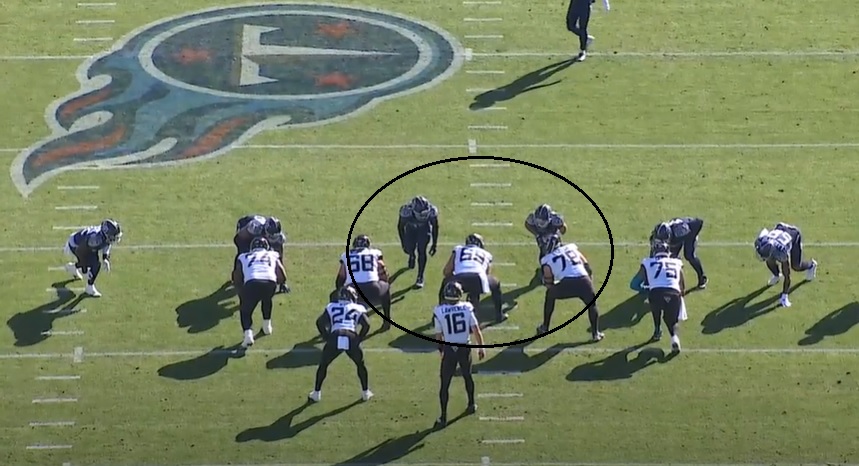 Also want to note against the Jags, the Titans brought pressure on a Hail Mary situation on the final play of the first half. Brought two DBs to force the ball out hot (with four DBs standing 50 yards away on their goal line) So if Pittsburgh is in that situation again, they’ll have to come up with something short. That’s generally their MO though. Shorter throws and hook and ladders.

The screen game could be effective against those pressure looks. Problem is the Steelers are a poor RB/TE screen team but it’s something to file away if you want to truly try to counter what the Titans are doing.

The Titans are a team that follows the representation of their head coach Mike Vrabel. You’ll find toughness across the board on the defense. They have a strong run defense and are number two in the NFL allowing just 1,182 yards rushing in their games. They have their own versions of Cam Heyward and Minkah Fitzpatrick and an impressive pass rusher on the edge.

Up front the guy to know is Jeffrey Simmons (98). He is the Titans version of Cam Heyward. He mainly lines up from the 0-3 techniques and is extremely disruptive. He has very good agility and play strength and uses his hands well to shed blockers or to attack when pass rushing (7.5 sacks). He will chase the ball everywhere. Teair Tart (93) is the other starter inside but is dealing with an ankle injury. He has good play strength and length, is solid versus double team blocks and has a good anchor. He plays with some nastiness but is not a threat as a pass rusher. The strong side defensive end is veteran Denico Autry (96). He has tight hips and is a straight line rusher using his hands and length well. He has the strength to set the edge, shows good pursuit from the backside and will drop into the flat in coverage.

The reserves include Naquan Jones (90) who has solid quickness, gives good effort versus double team blocks and good chase against the run. He has good lateral agility and will mix in a club and swim when rushing the passer. Kyle Peko (95) plays the 0/1 technique and has the strength to reset the line of scrimmage, has solid quickness and has active hands when rushing the passer. Larrell Murchison (91) is a defensive end with a high motor and a strong tackler. He can get a solid push in power rushes but has an adequate anchor against the run.

Simmons (98) is stout against the combo block, will shed the left tackle and make the play on the runner

Harold Landry (58) leads the team with 11 sacks. He will play on the edge and as an off the ball linebacker. He has good up field burst, very good quickness to the inside and mixes up his pass rushes well. His high motor has him chasing all over the field and he has very good technique to stack and shed on the edge. Former Steeler Ola Adeniyi (92) has solid burst and bend around the edge when rushing the passer and will use and aggressive swim move to the inside. He is solid setting the edge and a strong tackler. Derick Roberson (50) is another high motor player with good acceleration and adequate lateral mobility. He’s got some bend and will also use a stab move rushing the passer.

Landry (58) is a very good pass rusher but look at him against the run. On the left side of the screen he will set the edge, shed the blocker and makes a physical tackle

David Long (51) is battling a hamstring injury. He is a very athletic compact linebacker and a strong tackler. He processes plays well, gets downhill quickly and a solid blitzer. Jayon Brown (55) have very good athleticism, processes runs and screens well and takes good angles to the ball. He has good route awareness in coverage and is the linebacker in their dime package. Rashaan Evans (54) is strong working through traffic and takes good angles versus outside runs. He gets downhill quickly and is a strong tackler.

Zach Cunningham (33) was let go by the Houston Texans and picked up by the Titans. He’s a lean defender with very good length to disrupt passing lanes. He diagnoses well, can move sideline to sideline and is strong in Man coverage. Dylan Cole (53) plays an aggressive style attacking downhill. He processes plays well versus the run and pass and displays solid awareness in coverage. Nick Dzubnar (49) is a veteran and core special team player tied for the team lead in ST tackles with nine.

The left cornerback is Jackrabbit Jenkins (20). He has good speed, change of direction and awareness in Zone coverage. He has a smooth transition and speed to handle Man coverage but is just and adequate tackler. Kristian Fulton (26) is the right cornerback and looked strongest in Zone coverage where can keep his eyes on the quarterback. He has solid Zone awareness and is a willing tackler but struggles a bit in Man coverage especially on crossing routes. Buster Skrine (38) has good toughness playing in the slot. He uses a good jam at the line of scrimmage and has good speed and change of direction to stick with receivers.

Elijah Molden (24) with come in on dime packages and plays in the slot or in the box. He is solid processing route combinations and will be used to blitz. He has adequate change of direction in Man coverage and limited play strength as a tackler. Greg Mabin (30) is a well-travelled veteran with good size, solid acceleration and solid change of direction. Chris Jones (23) was a height/weight/speed player with ball skills coming into the leagues and has been a solid tackler in limited action this season

Skrine (38) is in the slot to the top and will drop into Zone coverage, read the quarterback and undercut the route for the interception

Kevin Byard (31) is the playmaker on the back end. He leads the team in tackles (69), interceptions (5) and pass break ups (13). He also has two defensive touchdowns. He is often down in the box or playing in robber coverage. He fills gaps like a linebacker, is a very good tackler and plays a physical brand of coverage. Amani Hooker (37) is often the deep safety but will play in the slot as well. He’s a solid tackler and plays well coming downhill but the Steelers can go after him with the pass.

Byard (31) does a little bit of everything. He’ll come on a blitz looping to the middle to get the sack