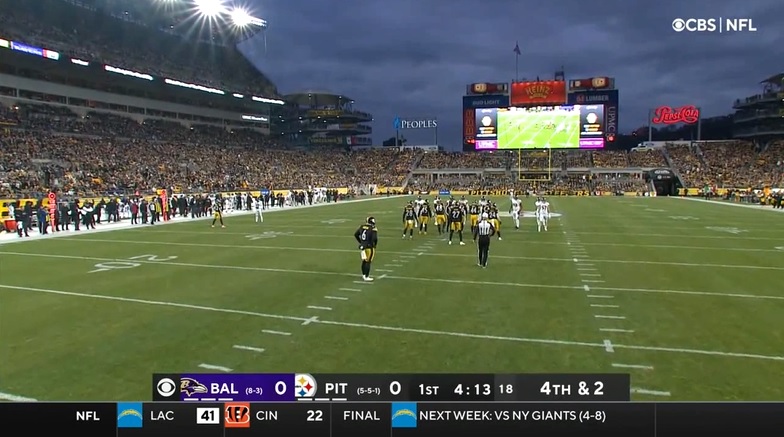 Harris got back on the twenty carry train and they were actually able to run the ball in the second half. His vision is really impressive when you watch him from the end zone camera view. He showed burst, physicality, agility and the mental processing to read gaps. And his balance is impressive being able to stay on his feet with all those hits.

In the passing game, he hauled in all his targets and that included two screen passes. From catch to tackle I had him with 42 yards after the reception. The other hauled in passes came on flat, sneak and swing routes. He continues to be number two in receptions on the team. In pass protection he looked good after his first rep where he dangerously ducked his head. His mental processing was on point to find the free rusher and he made a couple really nice blitz pickups.

Harris (22) sees Queen (6) fill the gap to the left so he shows off his vision and agility to cut way to his right absorb a hit, keep his balance and keep moving forward

He continued his consistency now with at least three receptions in seven straight games. He is currently third on the team in receptions with 43. His route tree this week consisted of a lot of shallow crosses and curls. The first reception was over the middle and he broke a tackle getting fourteen yards after the catch. His other receptions came on a shallow cross and his first two point conversion in the flat. He also saved an interception on a tipped pass.

As a blocker he showed some improvement on positioning and being able to sustain on running plays. They were usually base blocks on the edge but he did have a solid fold block to lead through the hole on Benny Snell’s first carry. He tried a cut block that was ineffective and his slide blocks lack physicality. He tiptoes behind the line of scrimmage and just tries to get in the way. Would love to see him really kick out and edge player. He had a couple reps in pass protection as well that were solid. He’s starting to come along as blocker.

I have been asking for sustained blocks from Green and he actually complied. He had some very good run blocks where he was able to remain in contact and move defensive lineman. He has excellent quickness to the second level and had a nice block on a toss sweep to the left picking up the linebacker. Overall, though this was probably his best run blocking game getting more consistent movement.

In the passing game, he performed better as well. In one-on-one blocks he uses better hand placement on the side of the breast plate of the shoulder pads to lock on and his anchor was better than previous weeks. Stunt recognition and keeping his head on a swivel still needs some work but he handled it better. He finds work on screens. You hate to see the lineman get out there and not hit anybody but he finds work.

It was worrisome early when Moore left after the second play on the first drive but he returned on the next drive to contribute a solid game as well. In the run game he washes defenders down the line opening up cut back lanes, he was solid on hinge blocks on the edge looked good leading pulling on an outside run to his left. When he locks on during drive blocks he can really move people and his timing on combo blocks is pretty good.

Early in the game he did a solid job in pass protection but got caught with his hands too high on a couple rushes. He will also lunge at defenders when the slow play their rush. The patience will come. He does seem to get better as the game goes on as he learns the tendencies of the defender. His punch quickness was better as well as the use of swipes to clear the hands of pass rushers.

Johnson saw his first special teams action since week one and contributed with his first tackle of his career. He was used on all four special team groups and made his tackle on punt coverage. He was in the left tackle position on punt cover and handled his blocking assignments well. He also had a near tackle on the first kick off. He also got down the field well in coverage and made a good decision on one return to try to airplane block rather than block in the back.

Congratulation to Johnson (45) on his first NFL tackle on punt coverage.

He continued to work at many positions on the defensive line from the 1 technique out to the 5 technique. His snap quickness was a little slow throughout the game and learned a lesson with his hands when Alejandro Villanueva chopped his hands sending him to the ground. His pass rush plan did not really show much in this game but that could have been by design to attempt to contain Lamar Jackson. He did get to chase him out of the pocket to the sideline on one play in the third quarter. He displayed good effort versus a double team block and made a nice play to dive and trip up Jackson on a run.

For this week’s defense Norwood was asked to play as the nickel corner and played a bit more Man coverage than Zone coverage. He was also asked to blitz five times in the game and nearly got his first sack. A less elusive quarterback and he may have had it. His first two tackles were on the Ravens tight end and the third on Devonta Freeman. His final tackle came on an early fourth quarter kick return.

The late touchdown was caught with him in coverage but from the film he was in really good position. The throw had to be perfect over his right shoulder and it was.

It was a rough day for Harvin despite the best punt of his young career. His second punt travelled 64 yards took a hard right turn and went out of bounds at the one. A really impressive kick. The others? Not so much.

The first punt traveled 38 yards and went out of bounds. The third punt was 43 yards but didn’t have a great hang time allowing for a solid return. The fourth was not bad traveling 47 yards with no return. The last was just 25 yards. Yikes. Take away the big punt and he averaged 38.3 yards. There must be something about punting in December in Pittsburgh the last few years.

Inactive for Week 13 – None