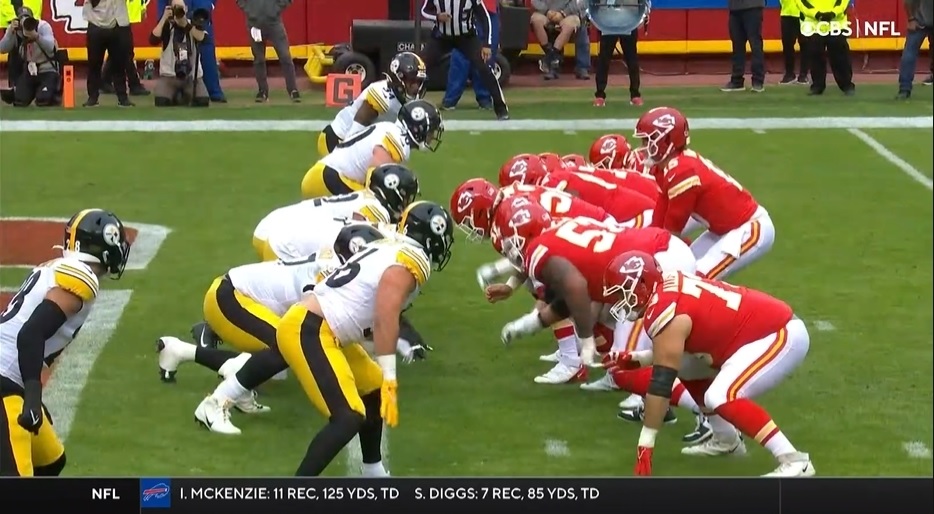 If the Pittsburgh Steelers’ performance Sunday evening in Arrowhead Stadium against the red-hot Kansas City Chiefs personified any character from the holiday season, they’d be Ebenezer Scrouge because that showing left us all feeling protagonistic about this Steelers’ team and despising December football.

Maybe the football gods will show this team the way in the coming weeks and they’ll become a better team, but that’s asking for a lot.

The offensive line was once again dreadful, Ben Roethlisberger turned the football over twice, the run game was mostly non-existent, Diontae Johnson fumbled the football with nobody around him, and the defense couldn’t stop the run or generate any sort of pass rush against Patrick Mahomes while playing soft zone coverage.

Let’s get to some grades from an ugly 36-10 loss. Hopefully none of your report cards looked like this in school.

Disastrous, right from the outset.

Roethlisberger, for all intents and purposes, certainly wasn’t the reason the Steelers out this game on the road, but he wasn’t part of the solution in competing. He threw a woeful interception on the second drive of the game that had absolutely no shot at being completed, had a handful of awful reads that missed open receivers and really just looked overly gun-shy and overwhelmed in the pocket against the Chiefs’ fast, physical defense.

It speaks volumes that Roethlisberger finished with 159 passing yards on 23 completions. That’s simply not good enough…ever.

Yes, he passed Brett Favre for third-most completions all-time with one franchise, and his late touchdown to Diontae Johnson was at least one positive, but overall it was an ugly day in the pocket for the veteran, who also lost a fumble deep in his own end off of play-action, leading to a quick 3 points for the Chiefs.

Mason Rudolph relieved Roethlisberger late in the fourth quarter and showed some life, throwing for 35 yards and adding a 17-yard scramble after stepping up in the pocket and breaking a tackle in the process, but on the final play from scrimmage — after spiking the football to stop the clock with 8 seconds left — Rudolph inexplicably threw short of the end zone, allowing time to run out.

It made absolutely no sense, considering how they clocked the football to get one last shot. That about summed up the day for the Steelers’ offense.

Sure, Najee Harris finished with 93 rushing yards on 19 carries and added a nice 21-yard run late in the first half, but it was mostly a rough performance from the rookie, who looks lost behind a broken offensive line at the moment.

Harris continues to try and bounce runs to the outside searching for the home run, rather than getting north in a hurry and taking what’s there while looking to dish out punishment.

He seemed to figure that out in the second half as he got going on the ground, but it’s worth pointing out the Steelers were down a bunch and the Chiefs weren’t worried about stopping the run.

I will say though: Harris is really good at forcing guys to miss, even behind the line of scrimmage when he seemingly has no shot at making a play. I love that he plays hard until the final whistle and just won’t quit.

Benny Snell Jr. got some run behind Harris on Sunday evening and was mostly himself, finishing with 20 rushing yards on five carries and one catch for six yards. He brought some physicality to the offense, but it was far too little, far too late.

Chase Claypool was the best receiver of the bunch on Sunday, no disrespect to Johnson. Claypool made back-to-back terrific contested catches late in the first half, flashing his ability to win in those situations. He just wasn’t targeted enough, which is puzzling.

Ray-Ray McCloud received more targets than Claypool (LOL) and did mostly nothing with his eight targets, finishing with four catches for 25 yards and drew a terrible taunting penalty with the Steelers down 30-0. Talk about being out of touch.

Johnson did score in the blowout loss and led the Steelers in catches with six for 51 yards, but he had an awful fumble in space with absolutely nobody around him that the Chiefs recovered, and then followed it up with an ugly drop in space. He was fighting himself throughout this one after the fumble.

James Washington came into the game late and proceeded to drop one from Rudolph, which about sums up why he’s on the sidelines so much.

Without Pat Freiermuth in this one, it really showed from a run-blocking perspective as Zach Gentry and Kevin Rader struggled to hold up at the point of attack in the run game.

Good news is Gentry played well as a receiver and made something happen every time he touched the football, finishing with four catches for 31 yards. It was baffling as to why they didn’t use him more.

Rader added one late catch for seven yards from Rudolph and took a big shot in the process. Hopefully Freiermuth gets healthy quickly and returns for the Week 17 game agains the Cleveland Browns.

This was a mess right away for the Steelers’ offensive line as guys like Frank Clark and Melvin Ingram II bullied Dan Moore Jr. and Chukwuma Okorafor right from the jump.

That was foreshadowing what was to come as the Chiefs sacked Roethlisberger twice, recorded two other quarterback hits and forced a Roethlisberger fumble that led to points.

The inability to protect against the Chiefs’ front was a very big reason why the Steelers were forced to throw quick and short time and time again.

It’s no surprise though that the Steelers’ offensive line played better once Kendrick Green and Trai Turner exited the game with injuries. JC Hassenauer needs to start next week against the Browns because Green is a massive liability at center, while Turner is simply slow at this point and isn’t a factor in pass protection or in the run game.

Hopefully Kevin Dotson can get healthy soon and return to give this bad offensive line at least some sort of boost.

Overall though, it’s worth noting – not counting Rudolph’s 17-yard scramble — that the Steelers rushed for 113 yards on the ground on 24 attempts. That’s a slight improvement.

There were flashes of solid play from the likes of Cameron Heyward and Isaiahh Loudermilk along the defensive front in this one, but it wasn’t enough throughout the game as the Chiefs rushed for 127 yards and a touchdown on the ground, doing largely whatever they wanted on the ground to keep the Steelers’ defense off balance.

I really liked what I saw at times from Loudermilk, who was always a solid run defender coming out and has shown he can be that in the NFL the last two weeks. Steelers might have something there.

I’ve seen enough of Henry Mondeaux for a lifetime though. He offers absolutely nothing and teams run right at him with great success over and over  again.

Carlos Davis flashed a bit against the run and recorded a tackle for loss, while Heyward recorded a sack.

Overall though, just not good enough snap to snap from the defensive line.

So much for Robert Spillane being the saving grace defensively.

He’s just a guy (JAG) and it showed again on Sunday, regardless of his 13-tackle effort. He was a mess in coverage, left guessing against the pass time and time again, and had an awful missed tackle along with Alex Highsmith near the goal line, allowing Clyde Edwards-Helaire to break it and saunter into the end zone.

Joe Schobert was mostly a mess too despite 10 tackles. Neither he nor Spillane could get off blocks to make any type of impact against the run.

Ulysses Gilbert III also played in dime defense and had good effort, but that’s about it. He’s a special teamer.

Outside, T.J. Watt tried to fight through his rib injury but really couldn’t do much. He had just one tackle and a couple of pressures, but he had to come off the field seemingly every other series, which stunted the Steelers’ pass rush.

I really liked what I saw from Alex Highsmith, aside from the missed tackle. People seem to be way down on him, but he’s a problem for offensive tackles. He should have had 2-3 penalties on Orlando Brown Jr. on the night, but they went uncalled. He did record a sack in the win as well.

I shudder thinking about where this Steelers’ defense would be without Minkah Fitzpatrick.

He was once again phenomenal for the Steelers defense, recording 12 tackles, showing great effort and conviction coming downhill against the run, making saving tackles time and time again. He also made two great plays on the football to break up big plays for the Chiefs.

Aside from him, the Steelers’ only other player that stood out in the secondary was Akhello Witherspoon, who had a key pass breakup in the end zone and also picked off a pass in the end zone on what was a free play for the Chiefs. He is starting to play strong football as of late.

Behind those two it was an ugly game for the secondary.

Terrell Edmunds missed numerous tackles and was a real liability in coverage as the Chiefs went after him often. He regressed big time in this one.

Joe Haden was a step slow and really didn’t make any sort of impact, aside from missing a couple of tackles. Cameron Sutton missed a tackle allowing a second touchdown to Byron Pringle, who cooked the Steelers on Sunday.

It was just far too easy for the Chiefs’ passing attack on Sunday, which put the Steelers in a hole rather quickly.

A much better showing for the Steelers’ special teams unit on Sunday compared to a week ago.

Punter Corliss Waitman, signed to the 53-man roster after Pressley Harvin III lost his father on Christmas and sat out Sunday’s game, averaged an absurd 60.5 yards per punt on two punts, showing off his massive leg with a long of 63 yards. He made the case to punt the rest of the season, if we’re being fair.

Chris Boswell missed a field goal in the loss, which about summed up the Steelers’ performance offensively, though he did bounce back and hit a 34-yarder later in the game. It’s never good to see him missing kicks though.

I was pleased overall with Ray-Ray McCloud’s performance in the return game, ripping off a 29-yard kick return and a 20-yard punt return in the losing effort. He’s a mess as a receiver, but he’s starting to make some plays in the return game, which is a real positive with this team at the moment.