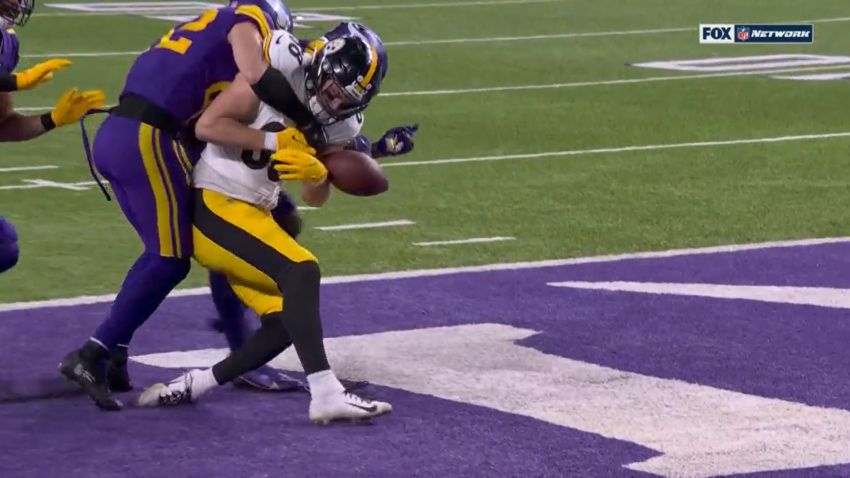 Pat Freiermuth had a shot at making what could have been a game-tying touchdown on Thursday night as time expired. The Pittsburgh Steelers would have needed to successfully complete a two-point conversion, but the play was in his hands—and then it wasn’t.

That sucked. And nobody feels worse about it—not even close—than Freiermuth. I’ve seen a few things out there, both from fans and from members of the media, laying into him in some form or fashion over not making the play. And it’s not right.

First of all, he didn’t drop the pass. At all. A great player made a great defensive play. Minnesota Vikings safety Harrison Smith, who has been compared to the likes of Troy Polamalu and Ed Reed by no less a historian than Bill Belichick, came over the top of Freiermuth and punched the ball out, while Freiermuth was simultaneously hit from the front.

He already has seven receiving touchdowns, leading the team. Only Heath Miller and Elbie Nickel ever had more receiving touchdowns in a single season from the tight end position in franchise history. And he’s been among the most reliable targets that Ben Roethlisberger has had in a long time.

The fact that you can already say that about him just 13 games into his career is part of the point. He’s caught 75 percent of his passes. He has only dropped two passes all season. He had the one bad fumble at the end of the Detroit Lions game. That was his big rookie blemish. Not this.

The thing is, Freiermuth is going to have a long career, hopefully in Pittsburgh. He’s going to make a lot of plays. Maybe he gets another chance to make a play like that, and maybe he makes it. But few players are going to make that play through contact like that.

He isn’t the kind of player who needs to be coached up and talked to about making those kinds of plays. I have no doubt that he absolutely thinks he dropped that ball, and that there’s no excuse for him not making it because it was in his hands. Piling on helps nobody, unless you’re a shock jock to boost your ratings.