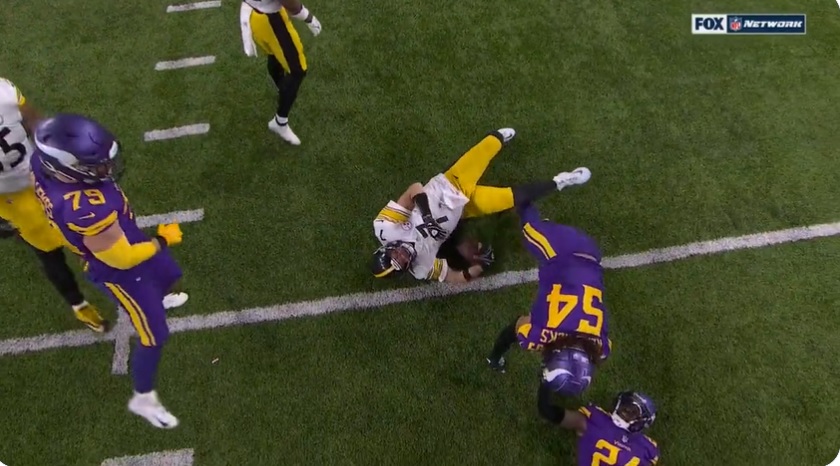 I’m not going to blame a rookie like OT Dan Moore Jr. for taking responsibility for he and his teammates’ actions. Ultimately, coaches coach, players play, and Moore isn’t going to dunk on his own coach for the gameplan. But there certainly felt like a contradiction in Moore’s analysis of the Pittsburgh Steelers’ pass protection gameplan.

On one hand, Moore said the gameplan put in place was sound. But as he explained the issues, he pointed out how the Minnesota Vikings exploited it.

“I think the gameplan that we had going into the game was fine,” Moore began to tell reporters Thursday night. “We just needed to execute.”

Ben Roethlisberger was sacked five times, the most he’s been dropped in a game in seven seasons. Several of the hits were from free rushes, either off the edge or up the middle, leading to hard shots that Roethlisberger struggled to get up from. As he did while DC of the Cincinnati Bengals, Mike Zimmer mugged the A gaps with linebackers, stressing protections and making it unclear who was rushing and who was dropping.

“They did a really good job sending blitzes away from our slides. So if you actually watch the film, you’ll be able to see that they were basically sending four man pressures to a two man side with the back on that side. So, I mean we only have three guys to block four guys.”

We’ll certainly have a breakdown of their breakdowns later in the week.

Moore also spoke of miscommunication from the O-line throughout the game. So he’s citing a solid gameplan but one riddled with miscommunication, and the Vikings blitzing away from where the Steelers were sliding was a perfect counter to what Pittsburgh was doing. Clearly, the Steelers lacked in execution and their gameplan, and that’s usually what happens when your quarterback gets sacked five times and hit countless more. These issues felt similar to what Eagles’ DC Jim Johnson did in a 2008 game, dropping Roethlisberger eight times with the same pressure package over and over.

To be fair, sometimes send overload blitzes. And you can’t block everyone. That means the ball has to come out hot, something that’s been an issue over the last two weeks. It’s clear Minnesota took some of the blitzes Baltimore effectively ran a week ago and used them Thursday night. Adrian Klemm and this front five will have to get back to the drawing board. They’ll have ten days to chew on this one.