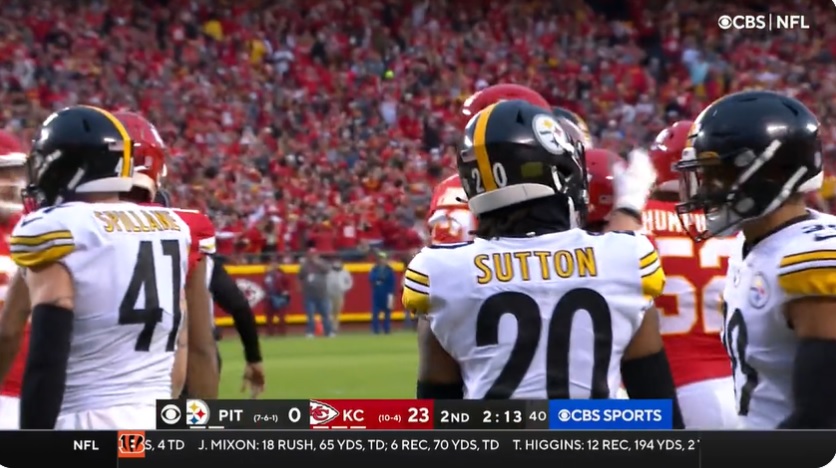 There was no post-Christmas miracle for the Pittsburgh Steelers at Arrowhead Stadium, as the Kansas City Chiefs clinched the AFC West and beat Pittsburgh in a 36-10 blowout.

The Steelers picked up a first down on their opening drive on an 18-yard reception by WR Diontae Johnson on second-and-12, but it was the only first down Pittsburgh would get. QB Ben Roethlisberger was sacked by DE Frank Clark on third-and-ten and P Corliss Waitman booted a 58-yard punt that was returned by Chiefs’ WR Mecole Hardman to their own 27. On third-and-seven, QB Patrick Mahomes hit WR Tyreek Hill for 10 yards and a first down to keep the Kansas City drive alive. Mahomes’ next two completions went for 11 yards each and the Chiefs were set up with first-and-ten at the Pittsburgh 38.

After a 13-yard reception by RB Darrel Williams, Kansas City had first-and-ten on the Pittsburgh 12-yard line. After a loss of one and an incomplete pass, DE Cam Heyward went offsides and gave Kansas City a third-and-six. TE Noah Gray gained five yards to get down to the Pittsburgh 3, and the Chiefs went for it on fourth-and-one. FB Michael Burton got the first down, and the Chiefs scored two plays later when RB Clyde Edwards-Helaire broke a tackle attempt by LB Robert Spillane and ran for a touchdown. K Elliot Fry’s extra-point gave the Chiefs a 7-0 lead with 4:07 to go in the first quarter.

The Steelers second drive started with a flea flicker and Roethlisberger was picked off by CB Charvarius Ward. The Chiefs took over at midfield and the Steelers immediately went offsides again to give Kansas City a first-and-five. On third-and-two, Mahomes found WR Byron Pringle wide open for an 18-yard gain. On the next play, Mahomes was hit by OLB Alex Highsmith and he fumbled but the fumble popped right into the hands of OG Joe Thuney for no gain. RB Darrell Williams gained 18 yards on a reception on second-and-ten, and on the next play Mahomes hit Pringle for a five-yard touchdown. Fry’s extra-point was good and the Chiefs took a 14-0 lead with 1:05 left in the first quarter.

The Steelers started their third drive at their own 20. Johnson got another first down when he took a screen pass nine yards on second down. On third-and-four, Roethlisberger’s pass to McCloud was almost picked off but it fell incomplete. Waitman’s punt travelled 63 yards for a touchback.

The Chiefs gained 27 yards through their first three plays with relative ease on their third drive to move to their own 47. On third-and-two from Pittsburgh territory, Mahomes climbed the pocket and dumped it off to Hardman who picked up 14 to move Kansas City to the Pittsburgh 31. The Steelers finally got a third down stop on third-and-five when Mahomes was incomplete to WR Josh Gordon down the field. Fry made a 44-yard field goal to put the Chiefs up 17-0 with 8:45 left in the first half.

Harris gained 21 to open up the Steelers fourth drive and the Steelers went no-huddle and Harris picked up another five on the second play of the drive. On third-and-seven Roethlisberger hit WR Chase Claypool over the middle for 24 yards and Claypool gained another ten yards to advance to the Kansas City 18-yard line. Back-to-back incompletions forced a third-and-ten, and a screen pass to Harris went for no gain. K Chris Boswell missed a 36-yard field goal and the Steelers remained scoreless, trailing 17-0 with 5:03 left in the first half.

RB Derrick Gore had an eight-yard carry, a 50-yard reception and three short gains to set the Chiefs up at the Pittsburgh 8. Mahomes threw a screen to Hardman and he took it to the house for an eight-yard touchdown. Fry missed the extra point, but the Chiefs still led 23-0 with 2:13 left in the first half.

The Steelers went for it on fourth-and-one from their own 34 and ran a toss to Harris that lost yards and the Chiefs took over in plus territory. The Steelers defense was able to force the Chiefs into a field goal attempt, and Fry missed a 39-yard attempt. The score remained 23-0, which is where it would stay at the half after the Steelers failed to score in the last 18 seconds of the half.

Pittsburgh forced a Kansas City punt to open the second half, and they started their first drive of the half at their own 30 with 13:26 left in the third quarter. Harris gained eight yards on first down and the Steelers looked like they were going to have a first down and more on a pass to WR Diontae Johnson, but Johnson just dropped the ball as he was running upfield and the fumble was recovered by the Chiefs, who took over at their own 49. The Chiefs picked up chunk yardage on a couple of six-yard gains and then had a first-and-ten from the Pittsburgh 27 after a nine-yard completion to WR Mecole Hardman. Three plays later, Pringle caught a 16-yard touchdown and Fry’s extra-point put the Chiefs up 30-0 with 8:53 left in the third quarter.

Pittsburgh entered Kansas City territory on a 17-yard completion to McCloud, and an impressive hurdle by Harris on second-and-four en route to a six-yard gain and a first down gave the Steelers a first-and-ten at the Kansas City 35. On third-and-ten, Roethlisberger threw a nice pass to Johnson but he dropped it. An offsides penalty against DL Chris Jones gave the Steelers another shot on third down, and the third-and-six pass was completed to McCloud but he got flagged for taunting. The first down stood but the penalty cost the Steelers 15 yards. A third-and-four pass intended for Harris was incomplete and the Steelers went for it on fourth down. Roethlisberger’s pass to Claypool was incomplete but a defensive pass interference call against CB L’Jarius Sneed gave Pittsburgh first-and-ten at the Kansas City 11.

Three straight incompletions made it fourth-and-ten, and OG John Leglue was flagged for a false start. Facing third-and-15, the Steelers brought out K Chris Boswell and he made a 34-yard field goal. The Steelers deficit was cut to 27 at 30-3 with 3:54 left in the third quarter.

Kansas City picked up three first downs without throwing a single pass and moved the ball to the Pittsburgh 39 on the last play of the fourth quarter. The Chiefs first pass came on the eighth play of their drive, and Mahomes connected with Pringle for a 22-yard gain that advanced Kansas City to the Pittsburgh 13. On third-and-nine, Heyward sacked Mahomes and Fry made a 34-yard field goal to give Kansas City a 33-3 lead with 11:57 left to play.

Roethlisberger was sacked and fumbled on the first play of Pittsburgh’s drive, and DT Jarran Reed recovered it and returned it to the Pittsburgh 7. QB Chad Henne replaced Mahomes, and he fumbled on two straight plays. On third-and-goal from the 13, Williams ran for a one-yard gain before Fry knocked in a 30-yard field goal to make it a 36-3 game.

McCloud was tackled at the Pittsburgh 15 on the kick return. The Steelers were able to pick up a first down on three straight runs by Harris, and eventually advance into Kansas City territory. WR Cody White contributed on the drive, catching two balls for 12 yards,  including one for a first down. The Steelers converted a fourth-and-four on their 17th play of the drive and it was a 15-yard touchdown to Johnson. Boswell made the extra point to make the score 36-10 with 2:54 left in the fourth quarter. The Steelers kicked it deep, and the Chiefs ran the ball on three straight plays before punting.

With 2:16 left, QB Mason Rudolph replaced Roethlisberger. Rudolph completed two straight passes, one to TE Kevin Rader and one to WR Cody White before throwing an incompletion. On second-and-ten, Rudolph made a nice play to avoid a sack and scramble for 17 yards. Rudolph wasn’t able to put points on the board, and the Steelers walked out of Arrowhead Stadium with a 36-10 loss.

Next week, the Steelers will return to Heinz Field to play the Cleveland Browns on Monday Night Football in a pivotal AFC North. matchup