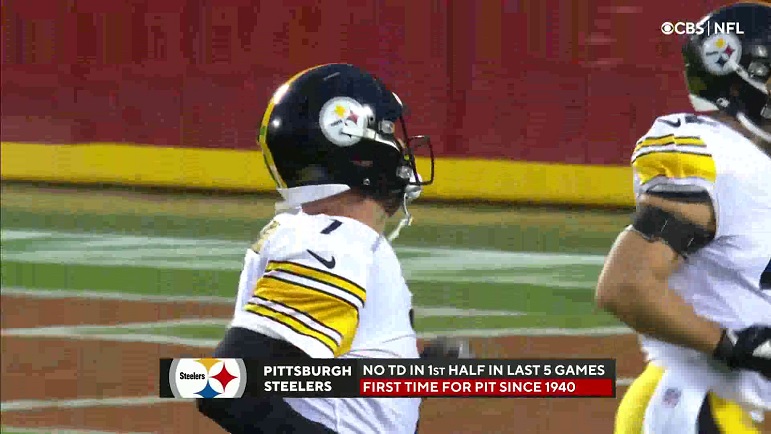 The Steelers’ offense is going through its roughest stretch of the season at the most inopportune time. They haven’t scored in the first half in the past five games now.

The playcalling can be highlighted as a contributor to the offensive problems thus far. Matt Canada has been a hot topic of controversy in his first season as offensive coordinator. Coach Mike Tomlin discussed the possibility of Ben Roethlisberger handling more of the playcalling responsibilities.

“You know, I’m not opposed to [giving Ben the keys]. Ben is always a component of planning, particularly as it pertains to starts. It’d be foolish for us not to include him in the process,” Tomlin said Tuesday via the team’s website. “So I’m not going to pretend like that has not been a component, or part of the discussions, as it pertains to the development of plans to this point in the season.”

Many Steelers viewers and fans have advocated for the usage of more no-huddle usage and incorporating Roethlisberger’s mind into the playcalling. To begin with, the offense has to actually move the ball in order to get the no-huddle going, something that obviously hasn’t happened in the last five first halves.

With the ineffective results, it’s clear Tomlin is open to new ideas. At 7-7-1, the Steelers’ playoff hopes will be all but gone if they continue to have such slow starts. In games like the Vikings and Chargers, the offense was able to execute a huge comeback, but it’s not a recipe for success as the season wanes down.

“We could score in the first half, that’s what our intentions are. That’s our intentions every week, but we’ve come up short and I’m not going to run away from that. We have an additional 24 hours of prep. We plan to use it from a schematic standpoint.”

With the Steelers playing on Monday Night Football, they do get an extra day of preparation, as mentioned by Tomlin. The preparation has been lacking for the Steelers on both sides of the ball.

Hopefully the extra day is just what the coaching staff needs in order to put together a better gameplan against the Browns. On Monday, we’ll find out just how involved Roethlisberger is in the calling of plays.