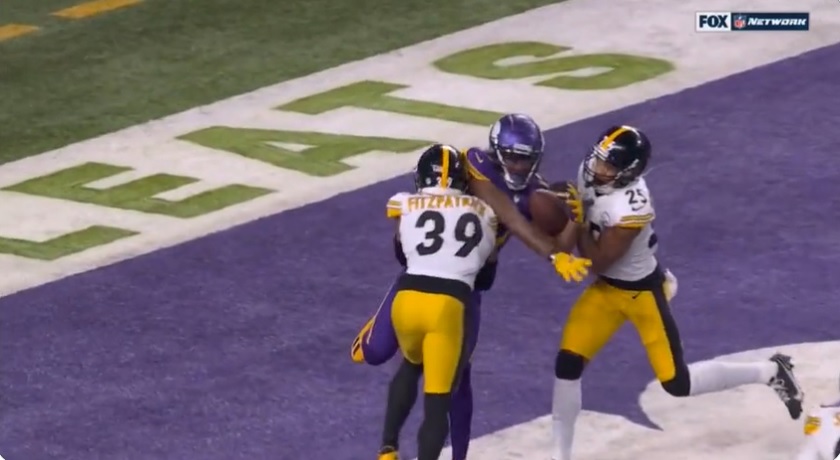 Minkah Fitzpatrick was at the forefront of some controversial calls in Week 14 against the Vikings. The one that sticks out to the most was when he was called for unnecessary roughness on Minnesota’s K.J. Osborn in the end zone.

Ref standing back of the end zone, crystal clear view of the play, and throws a flag for an illegal hit on Minkah Fitzpatrick. Fitzpatrick does everything right on this play. Textbook hit. Still gets called.

I don't know what the league wants defenders to do anymore. #Steelers pic.twitter.com/9iFctZubSr

Clearly, that is a textbook hit and clean according to all rules in football. There’s no violent hit made on the head of Osborn. Thankfully, the costly penalty still only wound up in a Vikings field goal. With that being said, Fitzpatrick hasn’t forgotten the complete mishap made by the referee.

“It does [affect how I do things moving forward],” Fitzpatrick said Thursday in audio provided by the team. “When you hit a guy clean the way that I did, There was a player later on, the one I broke up on the over with [Justin] Jefferson, while the ball’s in the air, I gotta think about how am I going to be able to hit his guy rather than just playing the ball.”

Fitzpatrick was also flagged on a 3rd-and-8 with just over two minutes remaining in the game. He was again covering Osborn, and made a phenomenal play on the ball. After long discussion, the refs did end up picking up that flag, which would’ve all but ended the game.

Several players and former players spoke out in dissatisfaction on the call made by the refs. It only adds to the ever-lasting controversy on helmet-to-helmet and unnecessary roughness penalties.

This is all happening as the replay is blown up on the big screen, yet the ref refused to admit his wrongdoing. Unfortunately, he knows there’s not much else he can do about it other than to move on.

“It’s part of the game [though]. It is what it is. There’s nothing that I can do about it. I can sit here and complain all I want, but nothing’s gonna change.”

Sadly, Fitzpatrick is spot on. These unnecessary roughness calls seem to always be a topic of controversy in the NFL, yet don’t get addressed. Compare it to how college football does things in which coaches can actually challenge a “targeting” penalty.

Being able to review unnecessary roughness penalties may slow down games a bit, but there needs to be a way to stop costing teams like this.