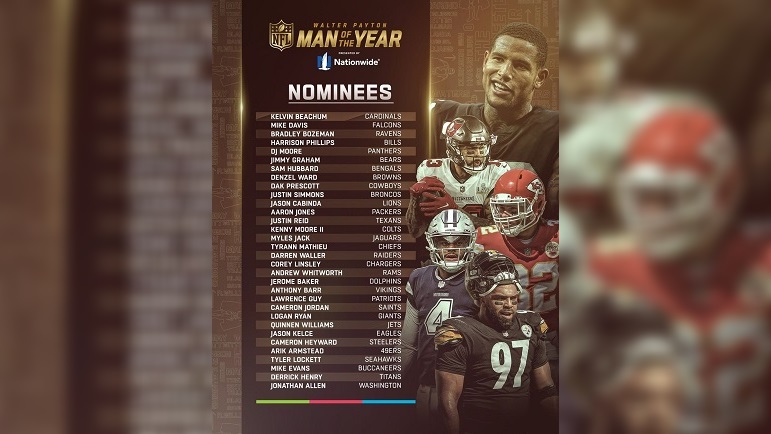 On Thursday, the NFL announced the 32 team nominees for the 2021 Walter Payton Man of the Year Award, and the Pittsburgh Steelers’ selection once again this year is defensive end Cameron Heyward.

The Walter Payton NFL Man of the Year Award presented by @Nationwide honors players who have exhibited excellence on-the-field, and whose passion to impact lives extends beyond the game. #ItTakesAllOfUs to make a difference. See the nominees here: https://t.co/R9P2JLXGBm #WPMOY pic.twitter.com/aMOBKbY0Tg

The annual award recognizes a player’s off-the-field community service, as well as his playing excellence; as has been the case for several years now, Heyward, a multiple-time team nominee for the annual award, is a perfect representative for the Steelers when it comes to those attributes.

“The Walter Payton NFL Man of the Year Award is the League’s most prestigious honor and these 32 men represent their many teammates who do incredible things in their communities,” said NFL Commissioner Roger Goodell. “Their unwavering commitment to their hometowns and team communities embodies Walter’s spirit of giving back in a way that makes us all incredibly proud of the work they are doing every day.”

Heyward established the Heyward House Foundation in 2015 to benefit many causes, including Southeastern Brain Tumor Foundation, Boys & Girls Club of Western Pa., DKMS, KidsVoice, Smyrna Stars Basketball Club, and after-school fitness programs. You can learn more about his foundation at his website, thecameronheywardfoundation.org.

“It’s really important to give back,” said Heyward. “A lot of people out there need our help. I will always continue to give back. I always want to make sure I can help people succeed and this gives me an opportunity to do that.”

If you have not already done so, please take time to cast a Pro Bowl vote for Heyward, a seven-time defensive team captain, who has become the leading voice in the Steelers’ locker room. The 11-year veteran has been selected to four Pro Bowls, and twice named first team All-Pro. He is truly deserving of it. The Steelers’ former first-round draft pick is currently second on the team in sacks with 6.5 entering Week 14.

Please participate in Nationwide’s seventh annual Charity Challenge, a social media campaign designed to support and promote the team nominees this year. Fans can vote on Twitter by using #WPMOYChallenge followed by their favorite nominee’s last name #WPMOYChallenge Heyward or #WPMOYChallenge @CamHeyward. The player whose unique hashtag is used the most between Dec. 7 and Jan. 17 will receive a $25,000 contribution to his charity of choice, while the second and third place finishers will receive $10,000 and $5,000 donations, all courtesy of Nationwide. Hashtag information and official rules can be found at nfl.com/manoftheyear.

All 32 team winners will be highlighted as nominees and recognized for their important work during the weekend leading up to Super Bowl LVI. The 2021 Walter Payton NFL Man of the Year will be announced during NFL Honors, a primetime awards special to air the Thursday before Super Bowl LVI on ABC. All 32 nominees will receive up to a $40,000 donation in their name to their charity of choice. The winner of the Walter Payton NFL Man of the Year award will receive a $250,000 donation to the charity of his choice. All donations are courtesy of the NFL Foundation and Nationwide. As a result of him being a nominee this year, Heyward will now wear a special decal on his helmet for the rest of the season designating him as such.