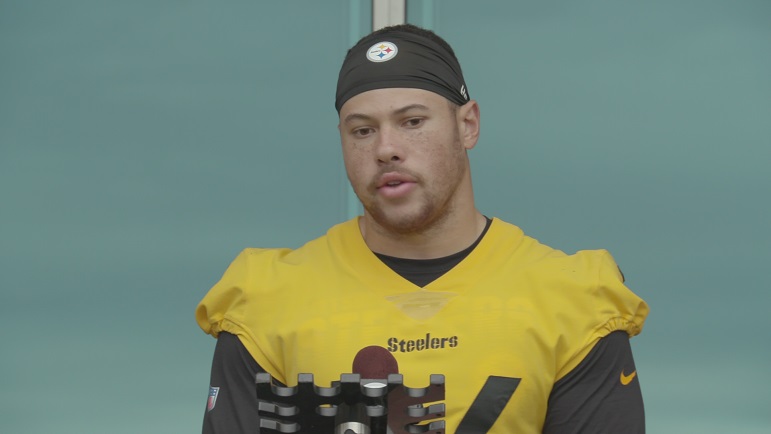 The Pittsburgh Steelers lost both of their starting outside linebackers to injuries during the team’s Week 14 Thursday night road loss to the Minnesota Vikings, as both T.J. Watt and Alex Highsmith were done in that contest not too long into the second half of play. According to reports since Thursday, both Watt and Highsmith sound like they will not miss the team’s Sunday home game against the Tennessee Titans. On Thursday, Highsmith, who suffered a quad injury against the Vikings, basically confirmed that he’ll be good to go by Sunday.

“Feeling great for Sunday,” Highsmith said during his Thursday afternoon media session. “So, it’s been a good week of practice so far so I’m looking forward to just seeing, you know, how all my efforts will pay off on Sunday. So, but I feel great.”

That’s good news indeed, as Highsmith’s services, along with Watt’s, will certainly be needed on Sunday. During his Thursday media session, Highsmith talked briefly about when and how he suffered his quad injury a week ago against the Vikings.

“It was just weird play,” Highsmith explained. “Like, I remember making the tackle in the second half and I got up and it just like, it was just a quad contusion. It hurt pretty bad. And like I tried walking it off. I tried my best to, and so I knew it’s just going to take rest. And so, but I feel good. I’ve been icing it all weekend. Icing it lot. Just kind of staying off of it. The weekend was good to get rest for it. And so, but I’ll definitely be good to go for Sunday.”

The play I clipped out below seems to be the play that Highsmith referenced as getting injured during.

I think this is the play that Alex Highsmith injured his quad on. #Steelers pic.twitter.com/8d2G4dVCqx

Highsmith made it clear on Thursday that he and the rest of team know that Sunday’s game against the Titans is a big one, as are the three remaining on the schedule after that one.

“Every game’s a big game,” Highsmith said. “Every game is a huge game from here on out. And we know that. You know, Coach Tomlin has told that to us and he’s preached that to us. And so, every day we come out here, we’ve got to have that mindset and every game from here on out, we’ve got to have that mindset. And so definitely need to raise our level of play, you know, through these next few games, you know, because we know that last game wasn’t our best performance at all. We know we can be a lot better.”

As for Watt possibly joining Highsmith back on the field on Sunday, barring a setback in practice these next two days, he is expected to overcome the groin tweak that knocked him out of the Week 14 game against the Vikings.