The Pittsburgh Steelers are taking on the Minnesota Vikings tonight at 8:20 PM/EST, a game that can be viewed on FOX. The Steelers enter this one 6-5-1 fresh off a critical victory over the Baltimore Ravens on Sunday. The Vikings are do-or-die at 5-7, losing to the previously winless Detroit Lions in Week 13.

To get you ready for the game, check out our prediction and our five keys to a Steelers’ win.

As always, be sure to refresh the page throughout the game for live updates, curates tweets, and more. Also, check out the comment section at the bottom of this page where fans of the team gather each week to discuss the game.

Let’s take a look at the inactive list’s for both teams tonight.

Not any surprises from this Steelers team.

The big news for the Vikings, is star running back, Davlin Cook, is ACTIVE. The cornerback, Patrick Peterson is also active for Minnesota, look to see him match up a ton with Steelers wideout, Diontae Johnson.

Steelers Nation always travels well. Minnesota isn’t a city you traditionally have circled for a stadium takeover for a Steelers away game.

Ben Roethlisberger takes the field for what may be his second to last primetime start under center for the black and gold.

Big Ben leads the @Steelers on the field for #TNFonFOX pic.twitter.com/NWNuEHoRx8

Continue to see more and more that Steelers Nation has a huge presence tonight in Minneapolis.

At least half of U.S. Bank Stadium is filled with Steelers fans.

Nothing like a home game in the Twin Cities! 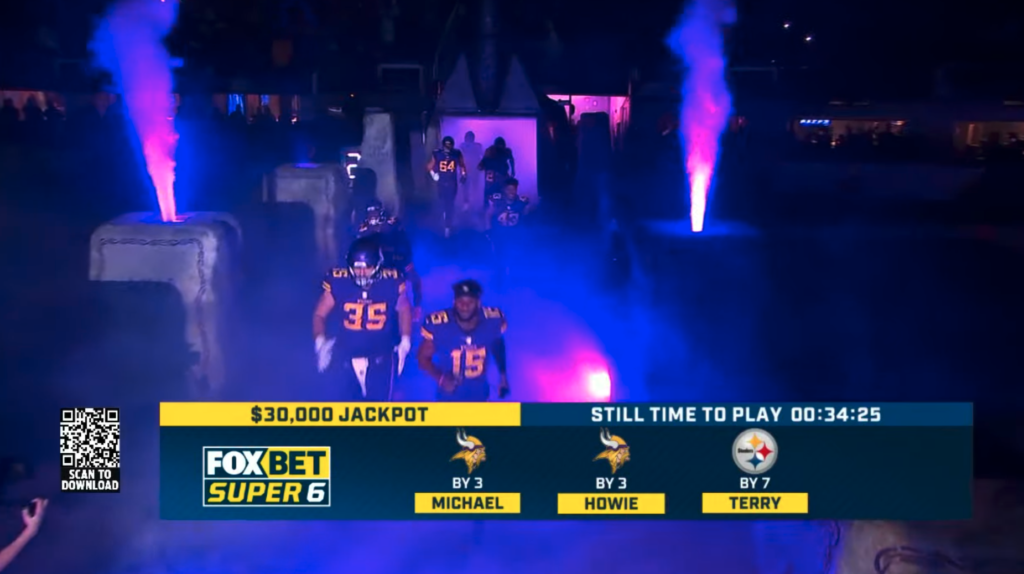 Terry Bradshaw is the only analyst to pick the Steelers to win. He thinks they’ll pull off the Thursday night win by a touchdown.

Steelers win the toss and defer. They’ll start the game on defense.

Ahkello Witherspoon on Justin Jefferson is being attacked early and often.

Perfect deep throw by Cousins against a bracket coverage, Jefferson can’t bring it in. Steelers are able to get off the field on third down the next snap.

Greg Joseph misses a 53-yard field goal to the left, time for the Steelers offense.

Big Ben uses his legs to pick up the 4th-down after the offense fight out of the hole created by Chase Claypool’s post-play penalty.

Steelers lose the challenge and get a few yards closer for Chris Boswell.

Rough drive for Claypool, a fumble called back, and then follows it up with a whiffed block.  Steelers go 3 & out.

End of the first quarter, this Steelers defense has gaps left and right. Vikings will be inside the red zone to start the second.

Another third-down throw hits Jefferson’s hands in the end zone and he can’t reel it in. Vikings successful on the field goal attempt, lead 9-0.

Steelers go three and out again after Roethlisberger sack on first down.

Embarrassing defensive “effort” by Pittsburgh so far if you can even call it that. Dalvin Cook was untouched for a touchdown. 16-0 Vikings.

Dalvin Cook already has 117 yards rushing with just under ten minutes to go in the second quarter. He’s averaging 16.7 yards per carry so far.

Not a soul in sight pic.twitter.com/x8PcnCmBJN

The Vikings official Twitter is getting in on the fun now.

Another sack, another three and out for the Steelers offense. Drink.

As if you thought things couldn’t get any worse. TJ watt is now out on the sidelines without a helmet.

Another easy touchdown for Dalvin Cook. Vikings lead 23-0. This isn’t even close to competitive.

It's still the first half.

Another sack of Roethlisberger will bring out the punt team. Vikings will take over with 1:35 left in the first half.

After back-to-back eventless offensive drives from the Vikings and Steelers the first half has come to a merciful end.