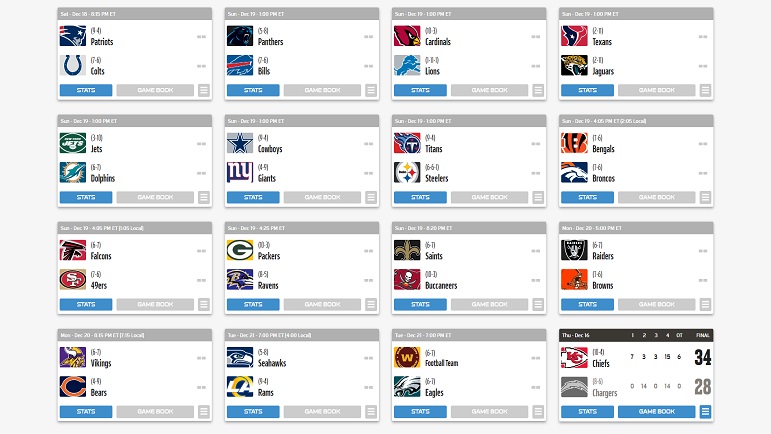 The Pittsburgh Steelers will play game their Week 15 game on Sunday at home against the Tennessee Titans and that’s a contest they really need to win to help their chances of making the playoffs this season. The Steelers enter Sunday of Week 15 with a 6-6-1 record and they are outside of the playoff picture window in the AFC. There are obviously quite a few other key Week 15 games to pay close attention to through Monday night if you’re into doing some scoreboard watching.  So with that, here’s a look at a few other games that Steelers fans might want to pay close attention to the next few days.

Here is your Week 15 rooting guide if you’re a fan of the Steelers:

The Patriots are running away with the AFC North while the Colts are still very much alive in the hunt for a Wild Card spot. The Titans, who will play the Steelers on Sunday, are one win and one Colts loss away from winning the AFC South division. The Steelers still have a good shot at finishing with a better record than the Colts, who enter Week 15 with a 7-6 record. Because of that, Steelers fans need to root for the Colts to lose on Saturday night to the Patriots. This choice is an easy one.

If you’re a Steelers fan, you want the Bills to keep on losing as they enter week 15 with a record of 7-6, same as the Colts. The Bills also play the Patriots in Week 16, so that could wind up being another loss for them. The Bills final two games of the regular season are against the Atlanta Falcons and the New York Jets, two teams that aren’t likely to beat Buffalo. So, Steelers fans need the Bills to lose their next two games with the first of those two coming on Sunday against the Panthers.

The Dolphins are quietly hanging around in the AFC Wild Card race with four gamers remaining in their regular season. additionally, their final two games might wind up being against teams with playoff spots and seeding secured. In short, it should be easy for Steelers fans to root for the Jets to upset the Dolphins on Sunday. The Dolphins, by the way, close out their regular season with games against the New Orleans Saints, Titans and Patriots.

Both the Bengals and Broncos are still very much alive in the AFC playoff race entering Week 15. Even so, Steelers fans will want to root for the Broncos to beat the Bengals on Sunday and obviously because of the impact that would have on the AFC North race. The Steelers still have a fighter’s chance at winning the AFC North and that scenario will need to include the Bengals losing at least two more of their final four games. A tie between the Bengals and Broncos wouldn’t be the worst thing in the world, however, all things considered.

This game is super easy as it includes an NFC tram playing an AFC North team. The Packers are huge road favorites against the Ravens on Sunday and that’s mainly because Baltimore is expected to be without starting quarterback Lamar Jackson, who is still nursing an ankle injury. The Ravens final three games are against the Bengals, Los Angeles Rams, and the Steelers and so there’s a chance we could see a total collapse by them. The Ravens enter week 15 as the AFC North leaders and they could still wind up being atop the division entering week 16 even if they lose on Sunday. Go, Pack, go.

This game is sort of similar to the Bengals game against the Broncos as it features two teams, one from the AFC North and one from the AFC West, still very much alive in the conference playoff race. Also much like the Week 15 game between the Bengals and Broncos, Steelers fans need to pull for the AFC West team in this particular contest, which is now scheduled to be played on Monday night. Even with this game getting pushed back a few days, the Browns are still likely to be down several key players against the Raiders due to COVID issues. This really is a must-win game for the Raiders as well as a loss to the Browns on Monday would severely cripple the team’s chances of making the playoffs. Viva Las Vegas.