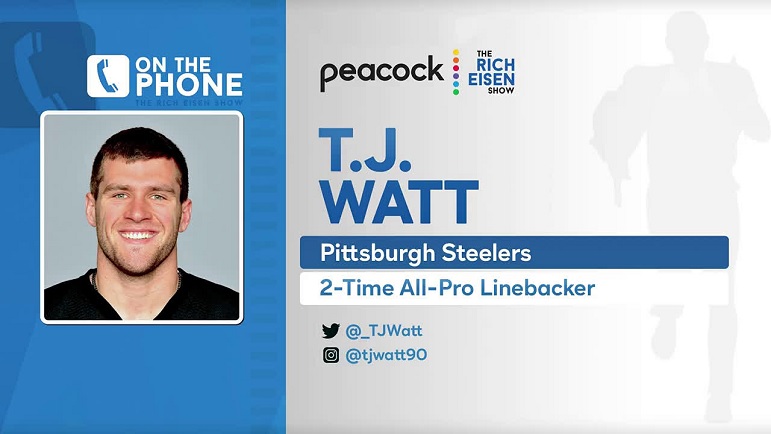 It was no surprise to see TJ Watt and the Pittsburgh Steelers’ agree on a record-setting contract extension right before the season began. Watt wanted to remain a Steeler, the Steelers wanted to keep him, which usually results in a deal getting done.

But it was a more agonizing and tedious process for fans to wait for the news. TJ Watt felt the same way. After the deal was agreed upon, Adam Schefter tweeted out a story of how Watt shut everyone up and got the deal done.

Steelers’ OLB T.J. Watt overruled his agents who believed they could get more money today, marched into the office of Steelers president Art Rooney and told him they had a deal. Then the NFL’s new highest-paid defensive player excused himself and announced he had to go work out.

Joining The Rich Eisen Show Friday, Watt was asked to confirm or deny that story.

“It’s partially true,” he said. “It just got to a point where there was back and forth towards the end in the minor details. Obviously anybody who’s dealt with any types of negotiations in life, once you get towards the end, there’s always little things here and there that you want adjusted. And towards the end, I just said, ‘Hey, this organization, Mr. Rooney has shown such great faith in me and wanting to keep me here. I’m so sick and tired of going back and forth, back and forth. They have a great deal on the table. Let’s just accept it and move on.'”

Watt did to the tune of being the highest-paid defensive player in NFL history, averaging $28 million per season. He’s been worthy every penny before and after. In 2021, he’s put up 8.5 sacks over the Steelers first seven games with Watt missing 1.5 of those due to a groin injury. He’s made clutch play after clutch play, including a strip-sack overtime fumble to beat Seattle in Week 6.

It’s not entirely clear if Watt immediately hit the weight room after announcing the news of a deal. But it’s evident he was excited to become a full participant again after putting in limited work throughout the summer.

“I wanted to get to work more than anything because obviously I wasn’t doing training camp. I wasn’t taking part in that. So I just wanted to get on the field as quickly as possible. And I felt the deal was fair for both sides.”

Unfortunately, most NFL negotiations are difficult. This one especially. Pittsburgh changed a long-standing philosophy of not guaranteeing money to non-QBs past year one. The Steelers broke in a big way, guaranteeing Watt’s second and third-year base salary.

Based on what Watt has done and will likely do for the rest of his career, the Steelers probably don’t have many reservations about folding. Not when it means keeping a player and person like Watt, one of the franchise faces for years to come.