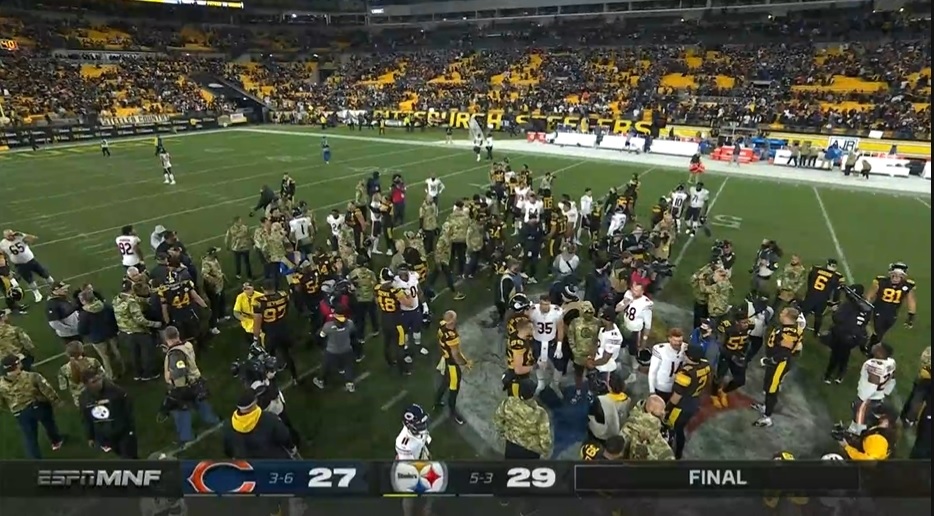 1. Winning the Contest – Starting this week with a positive. It was nice to see the Steelers receivers making the contested catch. It started with the catch by Chase Claypool which sparked a stagnant offensive drive. Dionte Johnson added on a ball that probably should not have been thrown. Those were topped by Pat Freiermuth’s second contested catch touchdown in the last two games.  The offense was pretty bad all game so enough plays like these had to be made for the offense to have any success.

2. You Gotta Keep ‘Em Separated – To follow up on the first point there is a reason players need to make contested catches. Against Man coverage this whole team has not been able to gain separation. Every throw needs to be on the money to give the receiver a chance and Ben Roethlisberger’s accuracy hasn’t been great all year. I don’t know if it’s the scheme design, the routes or the player’s inability but things need to improve.

3. The Woe Line – After a couple games of better play the offensive line took a step back this week. There was a least two free rushers coming in for sacks.  Trai Turner I believe was involve in both of those.  The left side each had a holding penalty. They averaged 3.3 yards per carry and allowed four sacks. If the Steelers can’t run the ball this offense will have no chance down the stretch. It’s time for big guys up front to start acting like it.

4. Mauled in Bear Attack – The Bears found something they could attack in the fourth quarter and that was Arthur Maulet. There were three plays in which he looked like he had Man coverage with no help over the top. Once against Allen Robinson and twice against Darnell Mooney.  He did not fare well and you don’t want him on the other team’s top receivers too often. Maulet has done a nice job this season but you can’t leave him in that scenario multiple times.

5. Long Trip by Ground – I’ve noticed this a few times over the last month and I don’t like it. In this game the Steelers had a 2nd and 18 and a 2nd and 19 and both times they ran the ball. In those situations you want go get at least half the yards to make third down manageable.  Running the ball is less likely to be successful in achieving that goal. To me that says they feel they have no shot to get the first down so the play it safe.

6. Pat on the Back – Confidence is high. I repeat confidence is high. You can see it grow from week to week in Pat Freiermuth.  As I receiver I think he has always had it. He really feels that any ball near him is his and he will catch it.  As a blocker there is work to be done but the way he was able to sustain blocks in space really benefited the receivers on their 6 carries. They are adding more and more to his plate and he is gobbling it all up. The sky is the limit here.

7. Softened Clay – Watching Chase Claypool last year I would often comment on how physical he played the game. He was a bully to opponents early in the year on special teams.  He was able to use his body effectively as a receiver.  He was solid blocking DB’s out in space.  This year he seems to less physical everywhere.  He should be able to create space with physicality.  He should be able to block just about any DB. He needs to get back to being a bully.

8. Points Are Not a Good Indicator – The Steelers recorded their highest point total of the season but that is deceiving. They Steelers were given good field position early in the game and took advantage of twelve penalties on the Bears resulting in 115 yards.  These were gifts and we thank the football gods because the offense was not good.  After Detroit next week the schedule become a very difficult.  With no offensive improvement things could get ugly.

9. Next Man Up – After a somewhat abrupt exit by Melvin Ingram it was nice to see a fairly seamless transition to Taco Charlton. I thought he played pretty well finishing with three tackles and he looked pretty strong setting the edge.  I also like the way Chris Wormley has been filling in.  He quietly had at least four tackles in four of the last five games.  He only had one tonight but also helped T.J. Watt get his first sack.  Nice to see players step up when given bigger roles.

10. Starting Negative to Get Positive – Too much of this offense is reliant on breaking tackles. I’ve mentioned the one yard pass when three yards is needed before. They throw a lot of wide receiver screens and Roethlisberger too often throws the ball behind the receiver taking them even farther from the line of scrimmage.  Johnson is often used on these plays and he only has 6 broken tackles over the last 21 games. So unless he has a lane, he isn’t getting yardage. And I don’t need bombs all the time.  Just work the short and intermediate areas. Stop making them work harder than necessary.