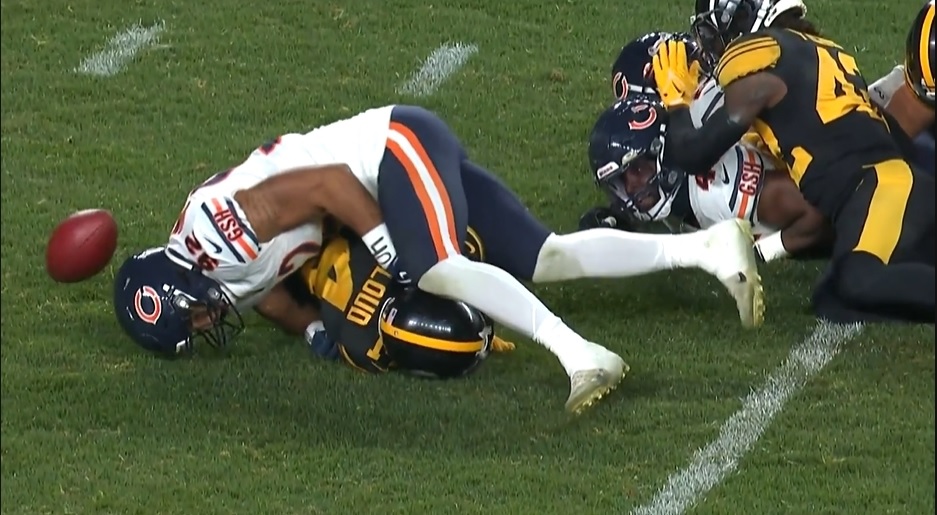 Despite a costly, and in Mike Tomlin’s words unacceptable, fumble Monday night, the Pittsburgh Steelers will keep Ray-Ray McCloud as their starting return man. During his Tuesday presser, Tomlin was asked if they’ll stick with McCloud and offered a short, clear answer.

“Yes,” Tomlin said via the press conference carried on the team’s YouTube channel.

Up 23-13 with 6:30 minutes left in the fourth quarter, McCloud fumbled the ball away on a Bears’ punt, attempting to spin off a defender and pick up a few more yards. Bears’ safety DeAndre Houston-Carson scooped up the loose ball and ran into the end zone. A true turning point of the game that led to a wild finish, Chris Boswell needing to connect from 40 yards out to thwart the Bears’ comeback.

If McCloud takes care of the football, the Steelers burn more clock and at worst, the Bears get the ball back down two scores with about five minutes to play. With the Steelers’ pass rush and threat of the run game eliminated, it’s unlikely Justin Fields would’ve been able to mount a comeback.

It’s the second straight week McCloud has fumbled, putting the ball on the ground on a punt in Week 8 against Cleveland. That ball was fortunately recovered by CB Justin Layne and the Steelers retained possession. McCloud now has three fumbles this season. Coming out of college and early in his NFL career, he had ball security issues. In six games with the Carolina Panthers in 2019, he fumbled three times, leading to his release. Then head coach Ron Rivera cited ball security as the reason why the Panthers let him go.

“He’s an explosive, dynamic player, we know that,” Rivera said in 2019. “But putting the ball on the ground is a little risky. We have to take care of the football better.”

But Pittsburgh, for better or worse, typically shows faith and patience in their special teams players. Danny Smith preached patience for rookie punter Pressley Harvin III, still struggling to find his consistency. The Steelers didn’t make a knee-jerk move on Chris Boswell during his difficult 2018 season and have been rewarded for their loyalty, Boswell returning to form and becoming one of the game’s best kickers.

They’re doing the same for McCloud, an explosive player who has been a productive part of the return units. But if he fumbles again, the Steelers’ patience may run out.