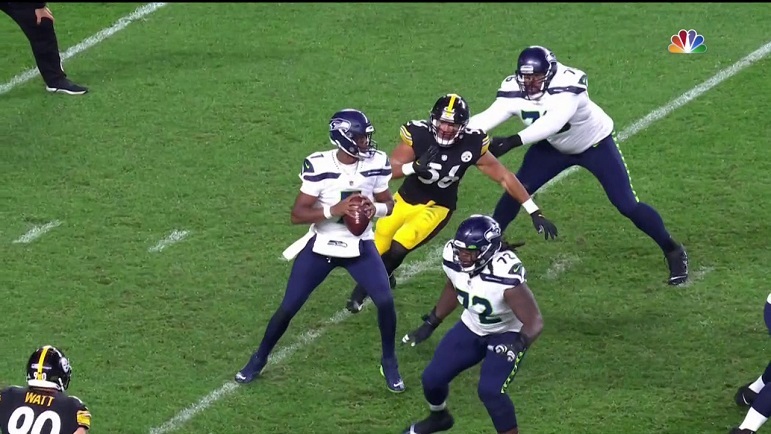 As we’ll do every week to get you ready for the upcoming game, our X Factor of the week. Sometimes it’s a player, unit, concept, or scheme. Our X Factor for Monday night’s game between the Pittsburgh Steelers and Chicago Bears.

Justin Fields shouldn’t have an easy time against the Steelers tomorrow. He sure hasn’t had an easy time his first six starts, sacked more than any other quarterback in football with more than double the number of interceptions than touchdowns. For a rookie QB playing on the road against a good pass rush like Pittsburgh’s, there’s always one reliable Plan B. Run. Break the pocket, extend the play, and scramble.

Fields isn’t an elite-level runner like Lamar Jackson or Kyler Murray. But he can certainly extend the play, as evident by his 100+ yard performance last week against the 49ers, one that saw him rip off some highlight reel runs. Most of that hasn’t been by designed, a curious decision by the Bears’ coaching staff to play him more like a pocket passer than someone whose legs are an asset. Much of Fields’ work has come scrambling, playing outside of structure, when nothing is open or when his offensive line loses the battle up front.

That means Pittsburgh will need to play sound contain defense. Something easier said than done. You’re trying to accomplish two goals. Get to the quarterback, that much is obvious, but also not letting him find escape hatches to either side (especially his right) or a lane up the middle. For a Steelers’ defense that isn’t sending 5+ rushers this season, just over 20% of the time in 2021. That’s down from 38.9% last season. When you rush four and there’s five gaps to defend, math tells you there is going to be an unaccounted for lane.

For the EDGE rushers, the outside linebackers, they have to ensure they don’t overrun the pocket or get caught inside on their rushes, allowing Fields to scramble to the edge. The interior guys need to keep eyes on the ball and ensure they’re not letting Fields run up the middle. And when a rusher has a two-way go, meaning the freedom to rush inside or outside, the guy next to him has to be aware and play more contain. Like Chris Wormley did last week.

TJ Watt choosing his rush plan based on how the offense protects. Feels the RB chip, spins inside, takes down Mayfield. #Steelers pic.twitter.com/uJJkTkvlH4

That might not look like Wormley is doing much here. But Watt seems to have a two-way go, spinning inside, so Wormley isn’t rushing hard and just keeping eyes on the QB incase Baker Mayfield was able to escape.

A pass rush has to work in tandem, similar to how it does for an offensive line. It’s not just four or five defenders doing their own thing, rushing independently, and hoping for the best. Pass rushing is based on structure and keeping Fields in that structure, and inside the pocket, when he inevitably wants to run, will be key.