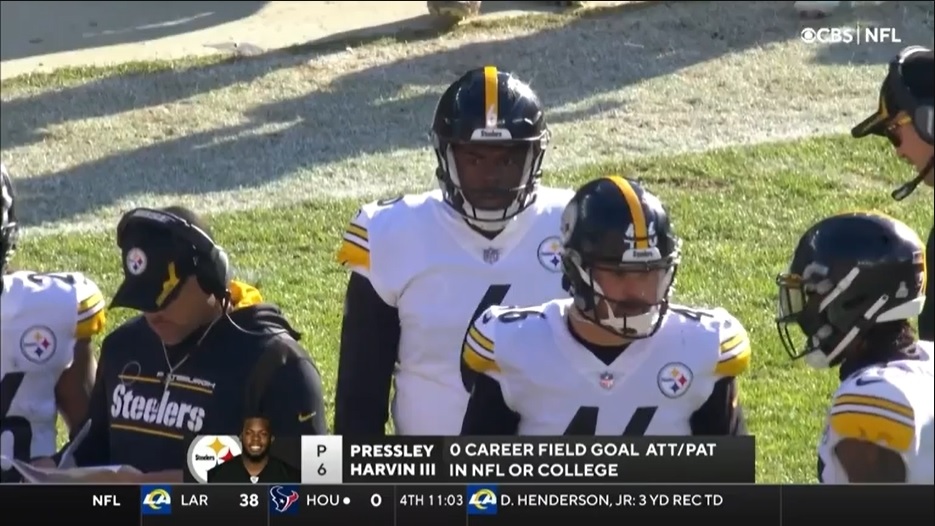 Do the Pittsburgh Steelers have a backup snapper, holder, and kicker, and punter? Yes they do.

Will the Pittsburgh Steelers use a backup snapper, holder, kicker, and punter? Not neccessarily.

That’s essentially how Mike Tomlin summed up what the Steelers did – or didn’t do – in the second half of Sunday’s win over the Cleveland Browns. After losing kicker Chris Boswell to a concussion following a miserable fake field goal, the Steelers did not attempt a kick the rest of the game. They went for two instead of an extra point when the score was 10-9 Cleveland. They went for it on fourth down as opposed to trying a short field goal, still down 10-9, early in the fourth quarter.

The CBS broadcast caught rookie punter Pressley Harvin III kicking into the sideline netting. But just because he was Plan B, didn’t mean Tomlin was going to treat him as Plan A.

During his Tuesday press conference, Tomlin discussed the line between having emergency specialists and actually using them in a game.

“We have an emergency kicker and he’s a component of that,” Tomlin said Tuesday via the team’s YouTube channel. “We have an emergency snapper. Ben is our emergency holder. Sometimes you get in those circumstances just because you have somebody identified, it doesn’t mean that you’re comfortable. Or it doesn’t mean that they’re varsity. And so although there’s somebody that occupies the position, you still have decisions to make whether or not that that’s the most prudent thing to do.”

Though Roethlisberger is the emergency holder, he told reporters postgame the team decided against him holding because Harvin was so inexperienced as a kicker, the Steelers not wanting to risk Harvin kicking Roethlisberger’s hand and injuring him. With so many new an uncomfortable pieces, Tomlin didn’t even test fate, as he had to do years ago against the New York Giants when Greg Warren was injured mid-game.

“I remember years ago, man, I had James Harrison identified as the backup snapper. I knew James wouldn’t leave it short and he didn’t. He came into the game and he snapped the ball over the punter’s head for a safety. You think about moments such as that when you’re in these unusual circumstances. And it’s a component of decision making, no doubt.”

In a 2008 game against the Giants, Harrison was pressed into action. Up 14-12 in the fourth quarter, Harrison snapped the ball well over Mitch Berger’s head and out of the end zone for a safety. Pittsburgh went on to lose the game. Tomlin defended the move afterwards.

“James snaps at least once a week, every week since I’ve been here,” Tomlin said via this ESPN article. “In practice and training camp is one thing. Inside stadiums and in the fourth quarter of a football game against the defending world champions is another thing. … If I had to do it all over again, I’d do the same thing. I’d hope for a different outcome, but I’d do it again.”

In that situation, the Steelers didn’t have much of a choice. It is slightly easier to work around not having a kicker than it is a long snapper or even a punter. Hopefully, the Steelers won’t be in a similar situation the rest of the season but Tomlin was adamant the team has a plan if they are. He wasn’t, however, willing to share what that plan is.

“I’m not going to get into the division of labor. I just want to hold my cards real close to my vest. Hopefully we’re not in those circumstances again. But if we are, I don’t want to tip my hand.”

It’s honestly unclear who occupies some of those emergency duties. Roethlisberger is the emergency holder and Cam Sutton – how he was chosen, I’m not sure – was spotted holding snaps for Harvin on the sidelines Sunday. The backup snapper used to be TE Vance McDonald. He did it in college at Rice, but with his retirement, it’s unclear who now shares those duties. Practice squader OL John Leglue did it in camp but he wouldn’t be of service in-game. It’s likely a linebacker or tight end who got roped into those duties. Maybe Robert Spillane.

Harvin appeared to be the team’s backup kicker though on Monday, Joe Schobert said Derek Watt kicked at his high school (I tried to verify that claim and could not). That does appear to be more experience than Harvin has. According to his high school bio page, he attempted just two field goals in high school, an extra point and a field goal. He missed both.