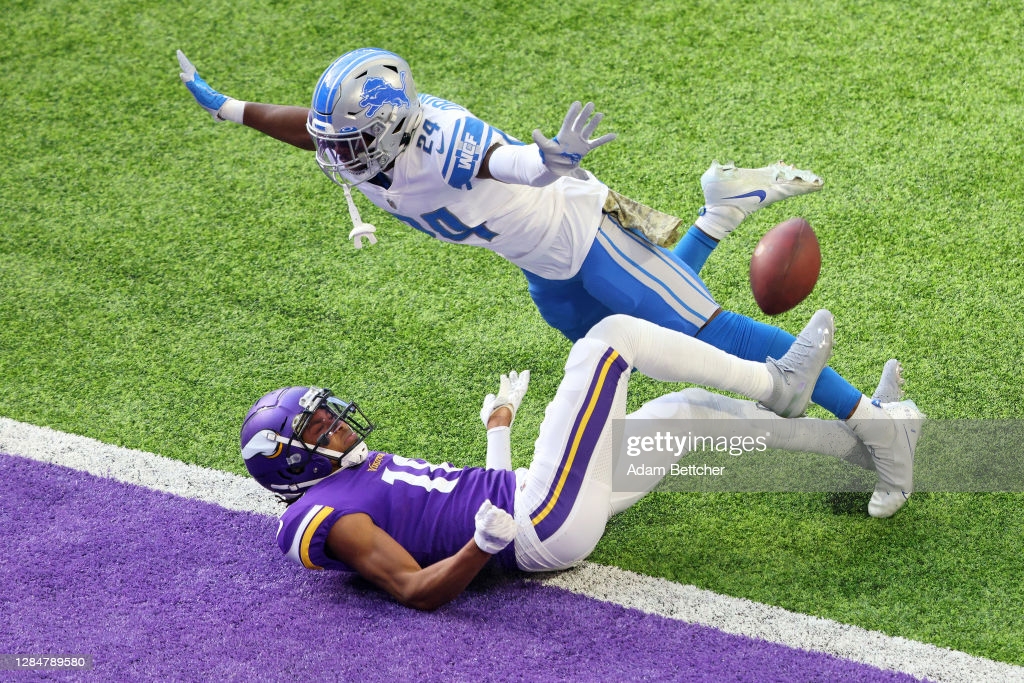 Detroit runs a 4-3 front with a run defense that has been marginal this season. They’re allowing 4.3 yards per carry, 16th in football, while allowing 26 runs of 10+ yards, a similarly middling mark. Their leading tackle is Alex Anzalone, the former Florida product with 48 tackles on the season. Safety Tracy Walker is second on the team with 45 total tackles.

It’s a young defense overall, just two players 30 or older, with some new faces coming along. Like Derrick Barnes, who we were big fans of coming out of Purdue this year. He’s only started three games this season and played under 50% every game so far but is up to 34 tackles. He appears to be playing in their base defense only.

Really, I think you can run on this group in a lot of different ways. When the Eagles can run on you, things aren’t going too well, 165 yards by running backs last week. Granted, Philly won big and that compelled them to run but they had success early and often.

Pittsburgh should be able to get the ball out on the perimeter with toss plays, outside zone, and WR runs. Detroit struggles to defend the edges. Especially attack #2 Austin Bryant. Though he’s listed at 260, he looks lighter and is a lanky, leggy player who struggles at the point of attack. To the tape, the Eagles had success on jet runs and tosses, something we’ve seen the Steelers do more often the last few weeks.

But the Steelers should be capable of winning the point of attack with double-teams from their interior linemen. The Lions were easily pushed around and washed on man blocks and aren’t nearly as stout as the Bears’ interior front was, even if there is talent up front in the form of Michael Brockers and Nick Williams.

Some other defensive stats. The Lions are allowing 30.5 PPG, 31st in football and only ahead of the New York Jets. Detroit’s given up 30+ points in four games and allowed 20+ in six of eight. Their third down defense is bad, 29th at 42.5%, while their red zone defense is worst in football, allowing a TD 83.3% of the time. If there’s a week to put up points for Pittsburgh, this is it.

The pass defense hasn’t been good. They’ve allowed 32 passes of 20+, tied 21st in the league while the seven passes of 40+ yards is tied 24th. That’s not good but it’s far from the league worst either. Which makes the fact they’re allowing 9.3 yards per attempt all the more astounding.

To put that YPA in perspective, consider these two stats. Since the 1970 merger, only one other team has finished the season at 9.0 YPA or above, the 1975 Jets, who finished the year at 9.2. The last time to end a season above the Lions’ mark are the 1962 Washington Redskins at 9.4.

The Lions still have half a season to go and that 9.3 number could and probably will come down. But it’s a crooked number and the fact they’re not even last in 20+/40+ completions means teams are consistently pushing the ball downfield, not just hitting a couple chunk plays to skew the numbers. It’s also worth noting the Lions have faced the fewest passing attempts because they’ve trailed in so many games. So that’s one reason why their volume numbers aren’t dead last in football.

Another reason for their poor coverage has been a lifeless pass rush. Just 14 sacks this season, tied for 29th in the league. Only one player – Charles Harris – has more than two sacks on the year and Harris hasn’t registered a sack his last three games. Only one DB has a sack this season, Tracy Walker, so watch out for him (#21). They rank last in total pressures and 26th in pressure rate despite a high blitz rate of 26.3%, 12th best in football.

Their biggest playmaker has been CB Amani Oruwariye, responsible for three of their four interceptions this year. Linebacker Anzalone has the other.

Ok, let’s talk X’s and O’s. Detroit has a habit of blowing coverages and miscommunicate too much defensively, one of (many) reasons for their struggles. They have a tough time being able to distribute bunch and stack sets, leaving too many receivers open in the middle of the field.

They play a fair amount of Cover 2, especially against Empty and 3×1 looks.

As we noted above, they are a heavy blitz team. Unusual for a base 4-3 front, who typically relies on their front four to get home. But with that group struggling, they’re forced to bring pressure. Two common blitz concepts. A Fire X blitz like the Steelers used to run. Saw it primarily against the Los Angeles Rams and not the Philadelphia Eagles (probably because of Hurts’ mobility) on 2nd and 10+ and 3rd and long.

Watch out for the field side blitz too by the safety and nickel corner.

The Steelers face another NFC North team this week as the winless Detroit Lions come to town. There are some quality young players up front on the interior defensive line but the defensive line as a whole is average at best. The linebackers inside and outside are an aggressive group but not incredibly productive. The best group overall may be the defensive backfield and they play with physicality. Let’s take a look at the Lions defense.

The defensive tackle group has some young players to develop around. Alim McNeill (54) is a rookie and has started for games. He was a draft favorite of mine and plays the 0/1 technique and has good snap quickness, active hands and is practically immovable against the run. John Penisini (98) is a second year player and is a high effort, high motor player with solid lateral agility and he plays with good pad level at the point of attack.

The defensive ends include veteran Michael Brockers (91) who uses good hand placement and leverage to move blockers versus the run and when bull rushing. He gets up field quickly but can struggle getting off blocks. On the other side is another veteran Nick Williams (97) who uses good play strength to stack and shed blockers and gets his hands up in passing lanes but will lose track of the ball in the backfield. Behind the starters is Da’Shawn Hand (93) who has a good quick punch, solid lateral agility and plays with good effort against the run or rushing the passer. Levi Onwuzurike (75) is another promising rookie who plays with very good pad level to get under the pads of blockers. He has good athleticism, can shed blockers and varies his pass rush well.

McNeill (54) doing what he does best. Aligned outside the left guard his going to clog the lane and make the stop with a blocker still on him.

Charles Harris (53) leads the team in sacks with four and is best using speed rushes on the outside and will be used to drop into coverage as well. He struggles setting the edge and can be displaced by blockers. Trey Flowers (90) has dealt with some knee issues this season. He is a long limbed and tries to use his length to his advantage. He has adequate snap quickness and a good punch to stun blockers.

Julian Okwara (99) is a lean pass rusher with a good motor. They will move him around and even put him over the center on some pass rushing downs. He has agility to play in coverage as well but has some struggles setting the edge. Austin Bryant (2) is another player with very good length using long strides to cover a lot of ground. He is solid setting the edge, varies his pass rush and showed good agility in coverage on running backs.

Harris (53) shows good pursuit from the right side to chase down the run going away from him.

Alex Anzalone (34) is the leading tackler on the team. He has solid mental processing and agility and does well scraping over blocks and getting through traffic. He doesn’t play downhill and lacks the pop in his tackles. Jalen Reeves-Maybin (44) is the opposite of Anzalone playing with good aggressiveness to get downhill and attack gaps. He has good athleticism but his angles to the outside can get him in trouble.

Derrick Barnes (55) has that old school look to him. He’s a thumper, tackles aggressively and can rush from the edge as well. He needs to improve diagnosing plays and getting off of blocks. Anthony Pittman (57) is an athletic small school linebacker who plays primarily on special teams with a high motor, solid instincts and is a solid tackler.

Here Anzalone (34) reads the play, scrapes over the top and makes the tackle for the short gain.

The left cornerback is Amani Oruwariye (24) and he has good size and length and likes to play with physicality. He has good route recognition and speed, is a good tackler in space and good ball skills leading the team with three interceptions. Jerry Jacobs (39) is the right cornerback and has active hand in Press coverage, good feet to mirror receivers and very good change of direction and acceleration to break on the ball in Zone.

A.J. Parker (41) is a lean corner who has started 3 games this season. He understands route combinations and is aggressive to the ball. He is a willing tackler in the run game and in space. Bobby Price (27) has also started a couple games. He relies on his very good athleticism at this point rather than technique. Mark Gilbert (40) was taken off of the Steelers practice squad and he saw his first action versus the Eagles getting 14 defensive snaps. He has potential after dealing with collegiate injuries but showed he’s a good tackler with good ball skills.

Will Harris (25) has started at safety and nickel corner for Detroit. The will use him to blitz from the slot and he plays with very good aggressiveness versus the run. You can beat him with speed in the slot. Tracy Walker III (21) is the guy who will be the deep safety most often. He’ll play the single high or split safeties, occasionally cover in the slot and is a good tackler in space. Dean Marlowe (31) got the start last week and played well. He has good mental processing and takes very good angles to the ball. He is very aggressive against the run and is a good tackler in space.

Here is Marlowe (31) on the edge in the red zone playing the option perfectly and making the sure tackle.