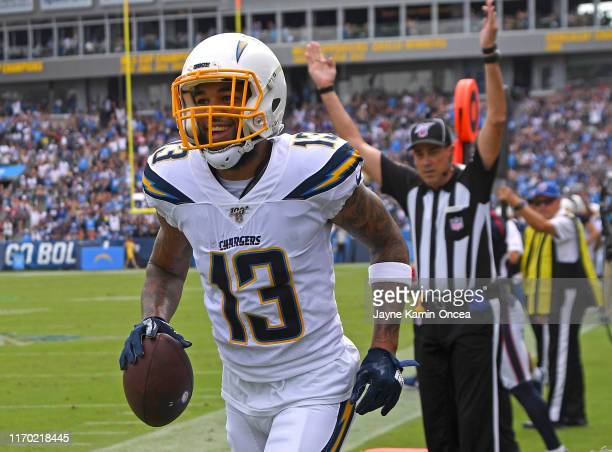 Not the first thing you think of when you think about this offense. But the Chargers boast a solid running game. Austin Ekeler is the main man in the backfield. While some think of him as a third down pass-catcher, he’s certainly capable of doing that, he leads the team in carries by a wide margin. 112 carries this season. The next closest back on the team has just 35. Ekeler is averaging a cool 4.7 yards per carry, tied 11th best in football. At quarterback, Justin Herbert is mobile and has two rushing scores this year too.

As an offense, they have 22 runs of 10+ yards which ranks just 24th but overall, the run game is solid, though not spectacular.

As a rushing attack, this are predominantly a man heavy run scheme. Double-team blocks up front and get the ball downhill. Here’s a couple of examples. Even check out the lead draw in the final example, with a TE (#82 Stephen Anderson) acting as the fullback.

Off of that, they will run toss plays, most often to the boundary and they can do it out of one or two-back. Crack/toss example on 4th down, a go-to play, though the offense came up short in Week 9 against the Eagles.

If you were wondering if Pittsburgh solved its issues against 6th offensive linemen, we’re going to find out. Chargers use one on a weekly basis, #68 Senio Kelemete, who played 15 snaps against the Eagles in Week 9. And they’ll motion him too. Bet they’ll study that Lions tape and see how effective it was. 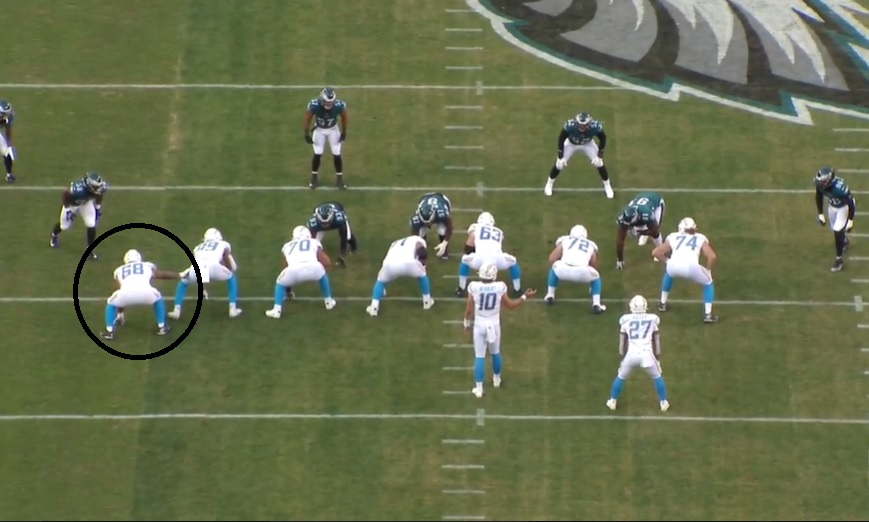 Some other offensive stats. They’re 15th in points per game at 24.3, failing to score 30+ in their last four games after doing it twice in their first five. For the firepower they have, these numbers are a bit disappointing. Their red zone offense is slightly above average at 62.2% while they are 7th on third down, converting nearly 44% of the time. They also have just nine turnovers this year, tied fifth fewest in football, so it’s really surprising to see their points per game rank just average.

With sophomore Justin Herbert leading the charge. His numbers are fairly similar from a season ago in terms of things like completion percentage and yards per attempt, though he may not have taken quiet the leap some (myself included) thought he would.  Herbert is completing 65.4% of his passes with a 7.2 YPA. He’s been clutch though. Four of the Chargers’ five wins have come on 4th quarter/game-winning drives, tying him for the most in football with Lamar Jackson and Ben Roethlisberger. AFC knows how to rally late.

He has a ton of weapons to throw to. Two big names are Mike Williams, taking a leap forward this season, and Keenan Allen. Different skillsets, different ways they win. Williams is averaging 14.1 YPC, fifth best of any wideout with at least 40 receptions, while Allen’s 65 receptions are tied third most in the league. Allen continues to be one of the league’s top route runners and third down go-to targets. This season, Allen’s 23 third down receptions are tied for the most in football while his 33 targets are second and his 17 first down conversions are tied for the fourth most. Since 2018, Allen ranks first in targets (165), receptions (107), and first downs (87) on third down. Big moments, he makes big plays.

Josh will talk about the individual talent more in the section below but this is a BIG wide receiver group. Bunch of guys who could’ve played basketball. Listed heights/weights of their top four guys.

Ekeler, the running back, also has 39 receptions. Herbert spreads the ball around well. Five players have 2+ touchdowns on the year. Five from their tight ends, Cook and #2 Donald Parham, the biggest of them all at 6’8. He has three touchdowns on just 11 catches.

Conceptually, they run a lot of 2×2 formations with mirrored routes. Two receivers to each side, running the same concepts. Some examples.

RPOs are a heavy-used concept in this offense. Have a couple of interesting wrinkles. Read option/RPOs where Herbert can hand it off, run it himself, or throw. Lot of layers, lot for a defense to try to defend. Not easy to do.

Chargers are a heavy playaction team that loves to use it on 1st and 10. Often get it with a Yankee concept, a post/over concept. First clip shows it while the second shows a variation, the over route coming across the field before breaking back to the outside. Interesting wrinkle.

Fresh off of an ugly tie against the Detroit Lions at Heinz Field, the Steelers return to action at the beautiful Sofi Stadium in Los Angeles to take on the 5-4 Chargers and budding star quarterback Justin Herbert.

Coming into Sunday’s matchup on Sunday Night Football, the Chargers’ offense under first-year head coach Brandon Staley sits sixth in Football Outsiders’ DVOA as Herbert has put up similar numbers to his breakout rookie season that saw him develop into a star in Los Angeles.

Though his yards per attempt are much lower than the previous season, Herbert is still playing really good football, and it helps that his plethora of pass catchers are some of the best weapons in football.

Herbert has made it look easy though, as he appears to be the perfect blend of size, athleticism and overall arm strength and accuracy.

This throw against Minnesota late in a comeback attempt in the Week 10 matchup at Sofi Stadium was absolutely incredible.

That’s an unreal throw from Herbert, who is off platform climbing the pocket and yet he still is able throw a dart past the linebacker’s earhole into star wide receiver Keenan Allen’s gut for a big gain.

With Allen drawing much of the attention, guys like Mike Williams, Josh Palmer and Jaylen Guyton have developed into real solid complimentary players. Williams, in fact, has become a bit of a star in his own right, developing into a 1B-type receiver.

It helps that Herbert trusts him immensely downfield and has the arm strength and accuracy to put it on Williams anywhere on the field.

Though Herbert and his pass catchers steal the headlines, the run game of the Chargers is roughly middle of the pack and is serviceable enough to provide balance for Los Angeles.

Austin Ekeler remains one of the best running backs in the game, period. He’s a well-rounded running back that is the elite of the elite when it comes to catching the football out of the backfield, and he has surprising power and contact balance for the position, which allows him to remain upright and carry a heavy load for the Chargers.

The Chargers love to run with six offensive linemen on the field — an area in which the Steelers have struggled defensively — and do a great job running off of left tackle behind rookie Rashawn Slater.

It helps having a running back as decisive and as explosive as Ekeler.

Even backup running back Justin Jackson can get into the action and give the Chargers a home run.

With such a sound running game, the Chargers are really able to keep defensives off balance, which has led to some success in 2021. Add in the abilities of Herbert as a dual-threat quarterback and it allows the Chargers to have a ton of success on read-options and even play-action passes.

Up front, I’m very pleased by the Chargers’ rebuild on the fly in the trenches. It helps that Slater fell to them in the first round. Add in signing away left guard Matt Feiler from the Steelers in free agency, and center Corey Linsley from the Packers, the Chargers are really set up front.

Here’s how I expect them to line up left to right on Sunday night:

Slater is a budding superstar at left tackle. He’s so powerful and athletic that he’s a matchup nightmare for even the best pass rushers. Feiler was always super underrated in Pittsburgh. He’s really taken a step forward in Los Angeles and is a true leader on the line, while Linsley is quietly one of the best centers in football.

The guy to watch here is right tackle Storm Norton. He’s having a heck of a year, winning the right tackle job and running away with it. This is a good group overall, one that has given Herbert plenty of time to throw and opened up rushing lanes for Ekeler, Jackson, and young backups Joshua Kelley and Larry Rountree.

On special teams, the Chargers continue to struggle at kicker, finally settling on veteran Dustin Hopkins in recent weeks after Tristan Vizciano couldn’t figure out extra points, leading to the Chargers making a change.

Hopkins has come in and righted the ship for the time being. He doesn’t have the biggest leg, but at least he’s accurate and will make the required kicks.

Punter Ty Long is averaging a career-high in yards per punt this season, settling into his role in Los Angeles. He has a big leg, gets good hangtime on his punts and will pin returners to the sidelines, wiping out any semblance of a return.

In the return game the Chargers get a big boost with the addition of former All-Pro returner Andre Roberts. Roberts nearly busted a return already in just three weeks with the Chargers, recording a 39-yard kickoff return against the Philadelphia Eagles. He’s close to breaking one and is so dangerous back there.