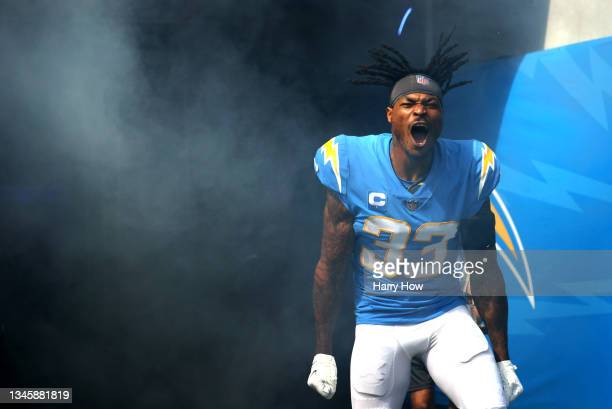 The Chargers have a hybrid front that shows multiple fronts. A guy like Joey Bosa can play with his hand up or hand down. They can go extra heavy with 6-1 looks to try to plug a man into each gap on the snap of the football. Could lead to a lot of passes on RPOs, a staple of the Steelers’ playbook. Or here, a 5-1-5 look.

Their leading tackler is safety Derwin James, who spends a lot of his team near the line of scrimmage. He has 80 tackles, 12th most of anyone in the league and the most of any safety in football. #33 is a game-changer and his presence after missing last year is huge. He’s one of just nine players this season with: 50+ tackles, 1+ INT, 1+ FF, and 1+ sack. Another one of those nine is Chargers’ LB Kyzir White, a former safety who was converted in the NFL.

What intrigues me about this group, and Tom Mead will focus on this more below, is their d-line. For as bad as their run defense has been, they have some studs up front in Linval Joseph and Jerry Tillery. Joseph has 43 total tackles this season, 7th most of any defensive lineman in football and he’ san interior guy. Tillery is a heck of a player too and better athlete, though his status is known for Sunday due to COVID. They’re one of four teams with two interior d-linemen with 30+ tackles, joining the Rams, Giants, and Dolphins.

The key to the Steelers’ run defense is to secure those guys, Joseph and Tillery, up front. Those dudes will win 1v1 matchups and wreck the path of the RB.

Double and securing them will create movement and get the back into the second level, even if the linebackers are going to run freer.

Still, I think Najee Harris will have to work hard to create on his own and make something out of nothing. Dalvin Cook did last week. Running lanes weren’t always abundant.

Some other defensive stats. They’re allowing 25.3 points per game, 25th in the league, and given up 24+ points their last five games after allowing it just once their first four.

According to Pro Football Reference, no team has missed more tackles than the Chargers’ 76, perhaps one reason why their run defense has been so poor. They’ve equally struggled on third down, 30th in the league at 45.9%, and haven’t been very good in the red zone, 20th at 63.6%.

A much better unit than their run defense. Their YPA against is about average, 13th in football at 7.2, while they’ve allowed just 12 passing TDs all season long, as many as they have on the ground. Generally speaking, they keep a lid on things, top five in passes of 20+ yards against with just 24 of them. When they do get hit, it’s usually for a double-chunk play with five of those completions going for 40+ yards, tied for 13th in football.

They do have 11 takeaways this year, ranking just about in the middle, but four of those came early in the season against the Chiefs. Over their last five games, they have just four takeaways. Not very good.

As a defense, they have 17 sacks this year, 27th in the league. Pressure has come from Joey Bosa (5.5 sacks) and Jerry Tillery (2.5 sacks) the most and both of those guys are in jeopardy of not playing this weekend. Bosa, of course, is one of the league’s best pass rushers and he’ll line up at either DE spot. Probably will test rookie Dan Moore Jr. a lot this weekend, who has struggled more than Chukwuma Okorafor has.

From a blitz standpoint, they’ve above average, 12th in the league blitzing 25.8% of the time. Their pressure rate is even stronger, an encouraging sign for any defense, sixth best at over 27%.

Schematically, I’d say they play more zone than man but when they man up, it’s because pressure is coming. Five man rush with Cover 1 behind it.

They like to run interior games and twists with their defensive line or a nose tackle and a linebacker too.

Overall, they play a lot of single-high, allowing James to play in the box. Also see them play combination coverage. Locking the backside X receiver while playing Cover 2 to the trips side.

They will play 2 Man on third and long and obvious passing situations, as they did against Minnesota on 3rd and 11 late in the second quarter in their Week 10 loss.

The Steelers travel west for a primetime game and there are a lot of question marks for both teams not only about recent play by the teams but also who will be available to play. The Chargers have four defensive players including three starters on the Covid list and it’s inconclusive whether they will play this week. We’ll look at all the players and even a few practice squad players in case the starters can’t go.

Jerry Tillery (99) is one of those on the COVID list. He is a defensive end with good length, quickness and hand placement. He has the strength to be a two gap defender, plays with good pad level and has a solid bull rush. Linval Joseph (98) is the veteran in the middle. He is a stout run defender with the hands and quickness to slip blockers and clog running lanes. Justin Jones (93) is the other defensive end and he has solid play strength and lateral agility with the quickness to shoot gaps and disrupt running lanes. His pad level varies and can get pushed back when not playing low.

The reserves include Joe Gaziano (92) who is an undersized defensive end that has a high motor and fights on every play. He has solid burst at the snap and a good chop to take on blockers. Christian Covington (95) is also on the Covid list and fits in that run stopper role in the middle. He is solid at the point of attack and the play strength to shed blockers. Potential practice squad call ups include Forrest Merrill (91). A rookie with good snap quickness, natural leverage, good hand usage and pursues on every play. Caraun Reid (77) is a veteran defensive tackle with good length to disrupt and quickness to shoot gaps.

Joey Bosa is the Chargers version of T.J. Watt. A premier pass rusher who can win with speed or power, has excellent hand usage and plays the run well. Bosa is also on the COVID list and his availability is up in the air. The other outside linebacker is Uchenna Nwosu (42) who has good agility, change of direction and gets up field quickly. He’s a physical tackler but is adequate setting the edge.

The reserves include rookie Chris Rumph (94). He is a long, lean, athletic player who has good up field burst coupled with good bend and agility to stress tackles on the edge. Kyler Fackrell (52) is a well-travelled edge player with a good motor and likes to use a stab when rushing the passer. He’s a little stiff but is a solid setting the edge and defending against the run. If Bosa is out they could call up Emeke Egbule (51) who has good play strength and heavy hands. He has a good first step and like to use a speed to power rush.

Bosa using his active hands to clear the right tackle and flatten to the quarterback to get the sack fumble.

Kyzir White (44) is the star in the middle. He has good mental processing and plays with very good aggressiveness. He covers a lot of ground, shows very good physicality as a tackler and handles Man coverage on running backs and tight ends well. Drue Tranquill (49) is the final player on the Covid list. He has good agility to skip around blocks, plays with good pursuit and is a good tackler. He is solid in coverage on tight ends but can struggle to get off linemen blocks.

The reserves include Amen Ogbongbemiga (57) who has solid mental processing, flows through traffic well and good acceleration to the ball. They’ll use him on goal line defense to attack gaps. Nick Niemann (31) is a rookie with good length and range; he likes to fill gaps and is a strong tackler. If Tranquill is out they could bring up Cole Christiansen (50) a former Army linebacker with an attacking style and is a good tackler.

Michael Davis (43) is a former undrafted player who is now the boundary corner. He has good size and speed, has solid change of direction and had good physicality in Press coverage but is a little stiff in space. The field corner is Asante Samuel Jr (26) who is very comfortable in Man coverage and is a smooth mover with good balance. He has quick twitch ability and likes to attack the ball in his area.

Chris Harris Jr (25) is a versatile player who plays a lot in the slot in nickel coverage. They’ll use him to blitz from the slot and he’s a willing participant in the run game. The Steelers can attack him with crossing routes to make him chase across the field. Tevaughn Campbell (20) has good physicality at the line when he can get his hands on the receiver and body receivers within the route well with solid change of direction in off Man coverage.

Nasir Adderley (24) is an athletic safety with good speed and the range to play the single high safety. He has good ball skills, closes on the ball quickly and is a solid tackler taking good angles to the sidelines. Derwin James Jr (33) will be used in many ways. He’ll play the split safety deep, will fill gaps from the box and will rush the passer on the edge in dime. He’s very active in the run game, is a strong tackler and tries to force turnovers.

Alohi Gilman (32) has an attacking style and is best playing downhill. He flies to the ball, is a physical tackler and has the size to handle tight ends in coverage. Mark Webb Jr (29) is another safety with good size, takes good angles to the ball and likes to play with physicality as a tackler. Trey Marshall (36) fits as a box safety, is an aggressive run defender and is a core special team player.