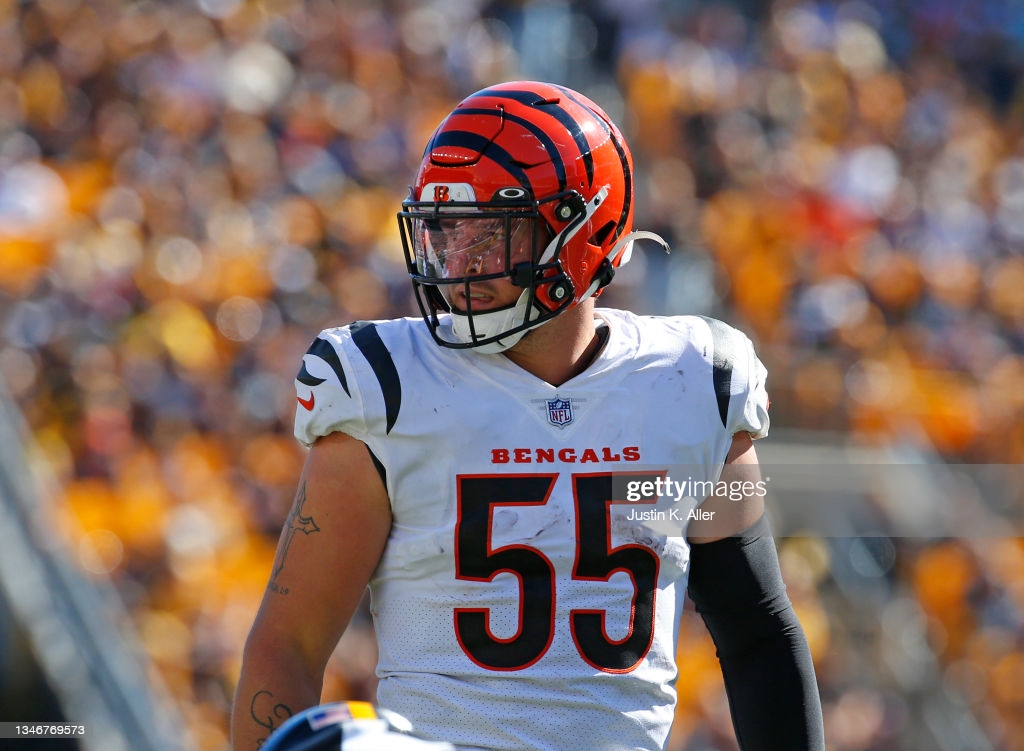 Though not an elite defense, a very good one and a unit that certainly held Pittsburgh in check the first meeting, holding the Steelers to 45 yards at three yards a pop. On the year, they’re allowing 4.2 YPC, tied 12th best in the league, and only nine rushing scores, a similarly slightly above average mark.

Much of what I saw from them in my first report is what I’m seeing now. They of course remain a 4-3 front with big guys in the middle. DJ Reader as the 1T, Larry Ogunjobi as the 3T. Two guys who are tough to run on. Kendrick Green had a heck of a time on Ogunjobi in the first meeting. Hopefully he’s better off this time around. Needs to be. 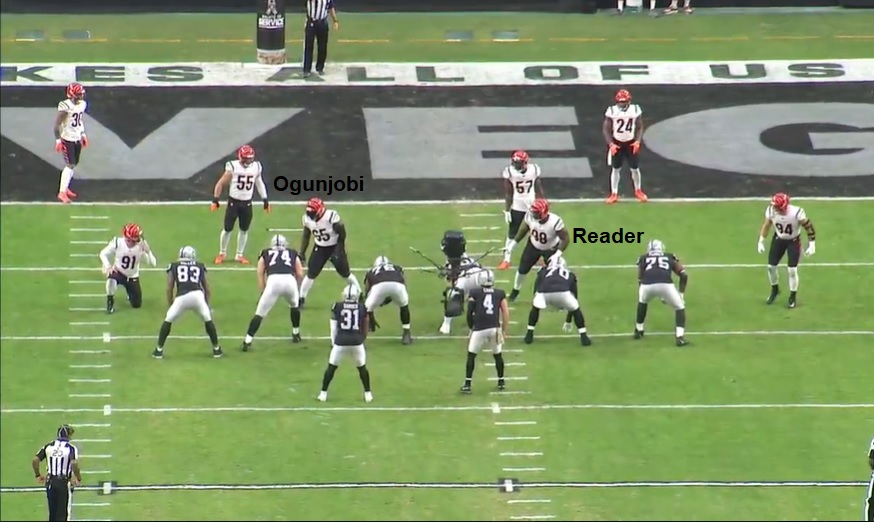 They have allowed 28 runs of 10+ yards, tied 10th best in football. Only five of those have gone for 20+ yards, tied 12th best in the league. The Steelers rank dead last in this category allowing 12 such runs.

As we also mentioned in that original report, the Bengals will go ultra-heavy when opposing offenses do. Saw this a lot in the Steelers’ game and in Week 9 against the Browns, who run a ton of 12 personnel. They’ll use a 5-2 front with five defensive lineman, though Sam Hubbard (#94 – LDE here) is versatile enough to stand up and drop into coverage. 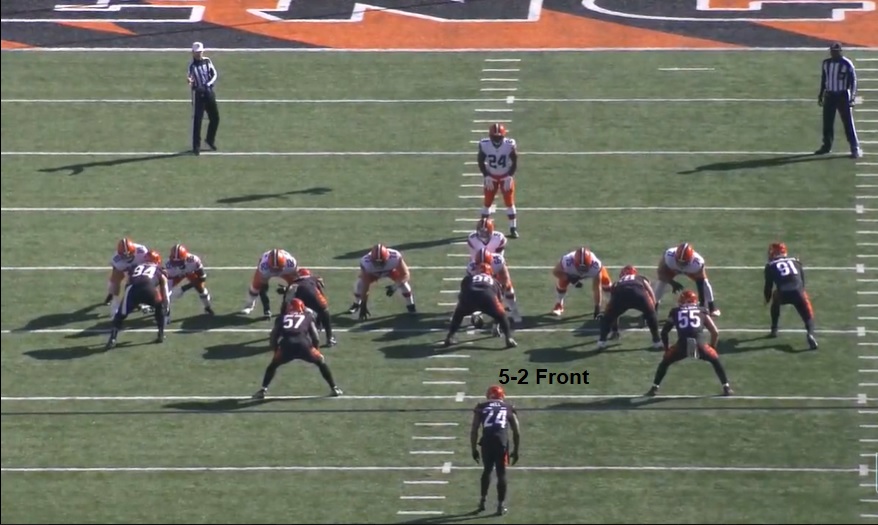 When teams throw against that, the Bengals are forced to play zone. So If Pittsburgh wants to go heavy, they better be committed to throw a lot and scheme up zone beaters.

Tom will talk about it more in his report but if there’s a LB to after, it’s #57 Germaine Pratt, who is slower to diagnose plays than #55 Logan Wilson, their best linebacker who had a pair of interceptions against the Steelers in Week 3. Overall though, I’d use more of a downhill running scheme than getting the ball on the edge with strong double-team blocks up front on Reader and Ogunjobi, similar to last week’s plan against the Chargers (though hopefully with more effectiveness).

Some other defensive stats. Top ten scoring defense at 21.6 points per game, holding the opposition at or under 20 points in five of their ten games this season. LB Logan Wilson leads the team with 83 tackles, the next closest has 62. Safeties Vonn Bell and Jessie Bates remain active tacklers and combined, have 121. Cincinnati has an above average red zone and third down defense. 13th on third down, 39.2%, and 11th in the red zone, 54.5%.

Cincy’s pass defense metrics have been hit or miss. They’re allowing a high completion percentage (67.6% – 13th) and also a below average YPA at 7.2 (19th). However, they are tightening up in the red zone and don’t allow many splash plays, giving up thirteen passing touchdowns this season, tied third fewest in the league. The 40 passes of 20+ yards is actually poor, 29th in football, but only three of those have turned into gains of 40+ yards, tied second fewest in the league. So they get beat on intermediate routes, not deep throws.

Wilson, their MIKE linebacker, leads the team with four INTs, again two of those coming versus the Steelers in their previous matchup. That’s more than the rest of their DBs combined, who have three.

From a pressure standpoint, their rush is getting home, the 11th most sacks with 25 of them. 24 of the 25 have come from the d-line; Wilson has the other. Free agent pickup Trey Hendrickson has been well worth his big contract, leading the team with 9.5 sacks this year. Sam Hubbard is next with six while two others have 3+ sacks so they’re getting sacks/pressure from a variety of people.

In typical Bengals’ fashion, they aren’t a blitz-heavy team, doing so just 21.8% of the time, 24th in the league. But their pressure rate is top-ten, 26.1%, because of the strength of that front four. As a defense, they have missed 75 tackles, seventh most in football.

They will mug the A gaps on third down with linebackers and safeties like Vonn Bell (#24) to stress protections and force them to work inside out, making life easier for their edge rushers like Hendrickson. 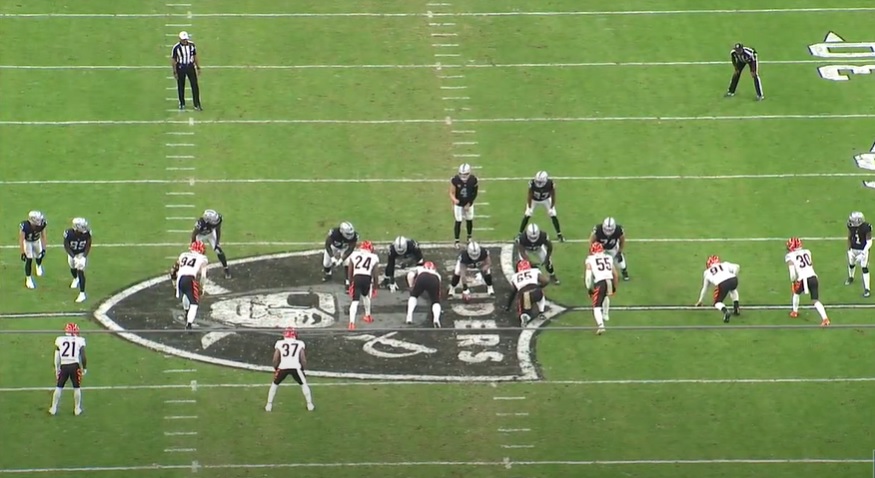 Watch out for them dropping eight in the red zone too, doing so on 3rd and Goal from the seven in last week’s win over the Raiders.

Seeing the Bengals on the schedule used to be almost a sigh of relief but not with these Bengals. This is a team building for the future. They are a top ten defense in points allowed, eleventh in sacks and fourth in rushing yards allowed. This is big game in the AFC North and the playoff picture so let’s a look at the members of the defense.

The Bengals have some good bulk at the defensive tackle position. D.J. Reader (98) is a veteran 0/1 technique that can play in a two gap scheme holding his ground to clog gaps. He’s a good tackler in his gaps but his pass rush is limited to power rushes. Larry Ogunjobi (65) is the 3/4 technique and he leads the DT’s in tackles and sacks. He is strong against the run, can anchor versus double teams and has violent hands in the pass rush.

Josh Tupou (68) will come in on tite/bear fronts as the other defense end and back up inside behind Reader. He has a great motor and strength to shed blockers. He has good mobility and has a very good bull rush. B.J. Hill (92) is the veteran depth and is a solid processor with good hand placement and play strength. He has solid agility to move with blocks and strength to push back offensive linemen with his bull rush. Tyler Shelvin (99) has only played four defensive snaps this year. He is a run plugger with good athleticism and play strength to hold up against double team blocks.

Cincinnati has a good tandem on the edge. Sam Hubbard (94) is usually on the left side and has good athleticism and agility. He has good mental processing, pursues the ball well and has good use of hands when rushing the passer. The free agent addition Trey Hendrickson (91) is earning his money leading the team in sacks with 9.5. He’s plays on the right side and is a solid run defender and mixes up his pass rushes well to keep the blocker on their toes.

Cam Sample (96) plays on the edge and will kick inside on passing downs. He processes plays well reading runs or screens and has quickness and power in his hands when rushing the passer. Khalid Kareem (90) uses solid hand placement when playing on the edge has an adequate first step rushing the passer and has adequate acceleration to chase from the backside. Wyatt Ray (93) plays with solid pad level and has a limited pass rush plan. His strength at the point of attack is adequate and like most of these edge players will drop into coverage.

Watch Hubbard (94) on the left edge. He’ll set the edge and then dive through the pulling blocker taking him out as well as the ball carrier

The inside linebackers are an aggressive group. Logan Wilson (55) leads the team in tackles and interceptions. He’ll be all over the field and diagnoses well. He stays in the middle on nickel and dime defenses. Germaine Pratt (55) is also versatile. He will play inside and then rush off the edge in sub packages. He likes to play downhill, works through traffic well and loves to hit.

Markus Bailey (51) is a smart defender with good mental processing. He’s a strong communicator, tackles with a pop and has shown solid Man coverage on tight ends in the red zone. Joe Bachie (49) is the fourth linebacker playing mostly on special teams. He reads and slides well as a run defender and is a good tackler. Clay Johnston (44) was signed off waivers from Carolina. He has good physicality works through traffic well and also is a special team contributor.

Chidobe Awuzie (22) is the right cornerback as has good size, good change of direction and comfortable in all coverages. He understands route combinations and has good ball skills leading the team with eight pass break ups this season. Veteran Eli Apple (20) plays on the left side has solid Man coverage skills. He has good feet to match receivers and the speed to run with them but is just an adequate tackler. Mike Hilton (21) is the slot corner and his strong against the run, is an excellent coming on the blitz and has very good recognition of screens.

Darius Philips (23) can play outside or inside and has solid size. He has loose hips for easy movement in Man coverage and likes to play the ball. Jalen Davis (35) is a reserve slot corner and special team player. He is has good competitiveness, mobility and change of direction. Vernon Hargreaves (29) is a former first round pick and was signed off of waivers from the Texans. He has yet to play for the Bengals but he has good agility and quickness with acceleration to close on balls in the air.

Stop me if you’ve seen this before. Mike Hilton reading the wide receiver screen and splitting blockers to make the stop

Like the edge players the safety duo is impressive as well. Vonn Bell (24) will most often play near the line of scrimmage. He likes to attack in the run game, flows to the ball well and in the passing game will be used in coverage on the tight end or will be used to blitz. Jesse Bates (30) will make plays everywhere on the field. He has the speed and range to play the single high safety and gets downhill quickly versus the run. He is a good tackler but can get wide with his angles.

Ricardo Allen (37) is most often used on the dime defense. He will play deep as a split safety or down in the box. He’s a solid tackler and will be brought on the blitz as well. Michael Thomas (31) was called up from the practice squad last week to play on special teams and made his mark with two tackles in the game.

Bates (30) will read the jet sweep, take a good angle to the ball and cut down the runner for no gain.