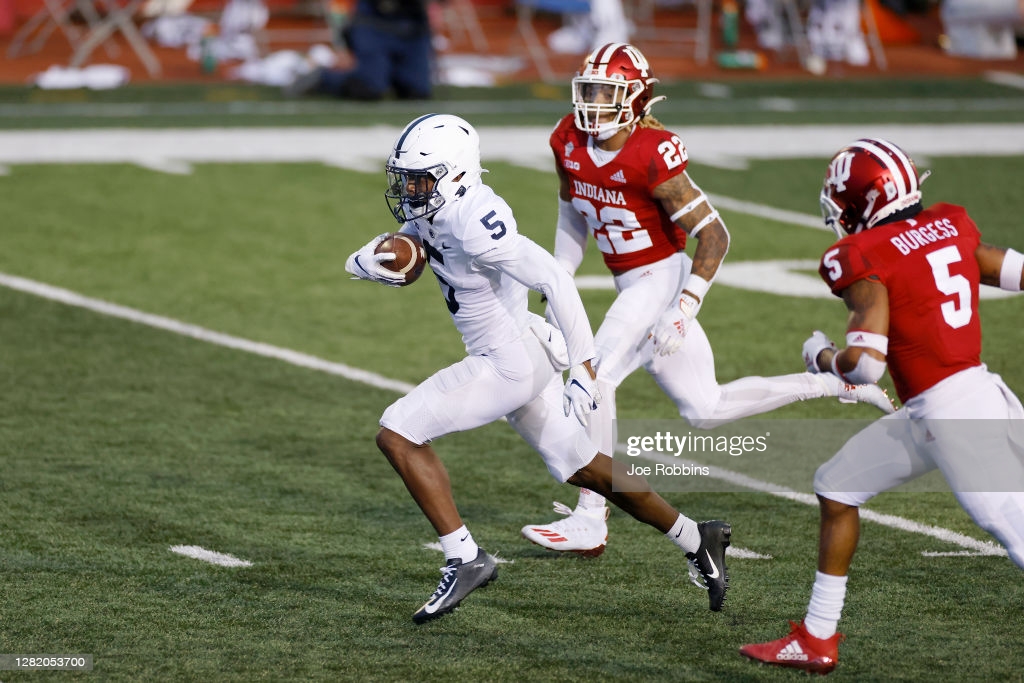 Every week in lead-up to the slate of college football games on Saturday, we will be highlighting several high-profile games, as well as several college football prospects in each matchup that project to be sought after in the 2022 NFL Draft, and specifically how they may be viewed by the Pittsburgh Steelers.

The Wolverines head to Happy Valley Saturday afternoon to take on the Nittnay Lions in a classic Big Ten clash. For Michigan, Aidan Hutchinson has been the pass rusher garnering the headlines in the media, but EDGE #55 David Ojabo has out-played the projected first-round selection this season. The 6’5″, 250 lb. junior has tallied eight sacks and four forced fumbles on the year so far, using a combination of impressive explosiveness, strength at the point of attack, and a variety of pass rush moves to defeat blocks. He pursues the QB with relentless effort as a pass rusher, being able to win the edge as well as have an impressive counter inside. The matchup between him and Rasheed Walker will be one to watch.

When I wrote up my article on prospects that impressed last week, I did a disservice not including WR #5 Jahan Dotson on that list. Dotson tore apart the Terps secondary to the tune of 11 receptions for 242 yards and three TDs in the convincing win for Penn State. The 5’11″, 184 lb. senior has been showing out all season, currently posting 71 receptions for 932 yards and nine TD to date. For being a small receiver, Dotson is dynamic at the catch point, coming down with contested catches players that have several inches on him struggle to come away with. Michigan will present more of a test on the defensive side of the ball, but Dotson should put together a strong performance.

With fellow LB Adam Anderson getting arrested for a rape charge this week and no longer with the team at this time, the Bulldogs will require several players on their vaunted defensive unit to step up into more prominent roles. One player to watch is #44 EDGE Travon Walker, a 6’5″, 275 lb. junior just oozing with talent and upside to become a stud in the league. Walker has a modest stat line thus far on the year (26 total stops, 3.5 sacks, two PBUs) but he has unteachable length and movement skills both as a pass rusher as well as when asked to work in space.

He has proven capable of dropping into coverage several times, playing both zone as well as running with backs and tight ends when manned up. He is strong at the point of attack when playing against the run and can line up in the A-gap all the way to the 7-technique as a stand-up pass rusher that is dangerous when utilized on twists and stunts. With Anderson out indefinitely, Walker has the chance to walk into more snaps and a full-time defender and make an impact down the stretch to send his draft stock soaring.

For the Volunteers, it will be a battle of emotions for #68 OL Cade Mays who transferred from Georgia after his sophomore season. When with the Bulldogs, Mays recorded starts at every position along the offensive line, getting his first exposure as a freshman with seven starts. While at Tennessee, Mays has primarily played at RG while starting several games at RT. The 6’6″, 325 lb. Mays is known for his nastiness in the run game, looking to put opposing defensive linemen on their backs, while also not allowing a sack on the season in pass protection. Mays will face his toughest test yet against the Georgia defensive line, but should he hold his own against such a talented unit, expect his draft stock to rise.

Purdue has been playing upset to CFP contenders in recent weeks, knocking off both then #2 Iowa and #3 Michigan State. The Boilermakers head into Columbus to try and channel that same magic against the fourth-ranked Buckeyes. If Purdue is to slow down the explosive Buckeye passing attack, #5 DE George Karlaftis must put together another strong performance. His stats this season aren’t anything spectacular, but the 6’4″, 275 lb. junior plays with a high motor and knows how to defeat blocks to rush the passer. He constantly put pressure on the pocket in the Iowa and Michigan St. matchups, and he will have to show out against a solid Ohio State offensive front if the defense hopes to rattle QB C.J. Stroud.

For the Buckeyes, #78 OT Nicholas Petit-Frere will be the one tasked with keeping his QB clean in this matchup as well as establishing the trenches upfront in an attempt to get RB TreVeyon Henderson going in the running game. The 6’5″, 315 lb. junior hasn’t been as heralded of a tackle prospect in the national media, but Petit-Frere is a talented blocker with the strength and power to displace defenders in the running game while also having the fluidity and quickness to get out in space and seal off the edge against edge rushers in pass protection. His name is gaining a lot of traction in a wide open, talented OT draft class, and a strong performance could vault him near the top of the list.

When the Hurricanes kick off against the Seminoles Saturday, all eyes should be on the potential matchup in the trenches. #60 OT Zion Nelson makes up one half of the individual battle to watch, as the 6’5″, 316 lb. redshirt sophomore has garnered a lot of attention by national media and scouts alike for his athleticism and upside at the LT position. He came in weighing in around the 260-pound range, and has since then added 55-plus pounds of functional mass to beef up his frame. While watching the N.C. State game, I noticed issues of playing with a consistent anchor in pass protection and occasionally beating beat around the edge, but the movement skills and potential make Nelson a tantalizing prospect to keep an eye on.

For the Seminoles, #11 EDGE Jermaine Johnson will be the one looking to rain on Nelson’s parade, and establish himself as a known commodity heading into the 2022 NFL Draft. The 6’5″, 262 lb. senior transferred from Georgia prior to this season to get more exposure and playing time to raise his draft stock, and the move has proven to be a fruitful one, as he ranks second in the ACC with 7.5 sacks on the season along with a forced fumble, fumble recovery and two PBUs. Johnson is a long, explosive athlete capable of playing as a stand-up edge rusher or with his hand in the dirt, having several pass rush moves and counters to beat OTs regularly in his pursuit of the QB.

He is enjoying a breakout season coming from more of a reserve role with the Bulldogs, and another exceptional performance against Miami will only strengthen his case that his name belongs with the top names in the draft class who specialize at hunting the QB.

What are your thoughts of the games and prospects listed above? How do you think they will fare on Saturday? Will you be tuning into any of these games specifically? Who else will you be watching for this weekend as a potential draft prospect for Pittsburgh? Please leave your thoughts in the comments section below, and thanks again for reading!