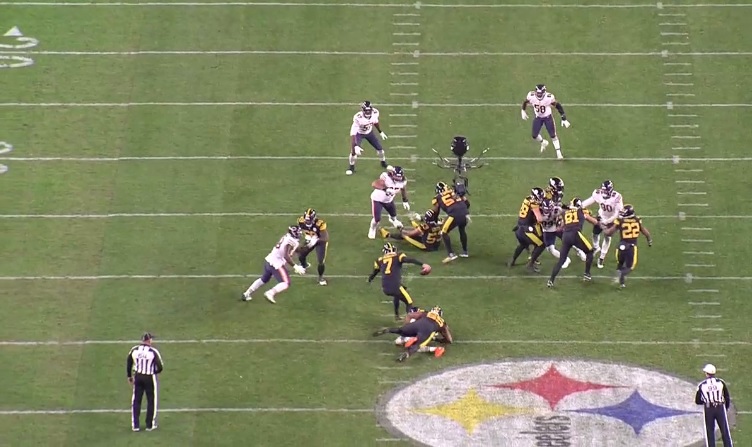 Breaking down the sacks allowed by the Pittsburgh Steelers in their Week 9 win over the Chicago Bears. It’s a busy one, with Ben Roethlisberger sacked four times. Let’s talk about it.

Play action, max protect shot. But Roethlisberger hardly has a chance to face downfield. Quick side note, hate how high the Steelers’ line plays on playaction. Seems to be by design, and you have to walk the line between selling the run and actually being able to block up the play-pass, but this immediate “high hat” read from the O-line keys the linebackers and secondary that it’s pass. Makes play action, already not this team’s strong suit, all the more ineffective. 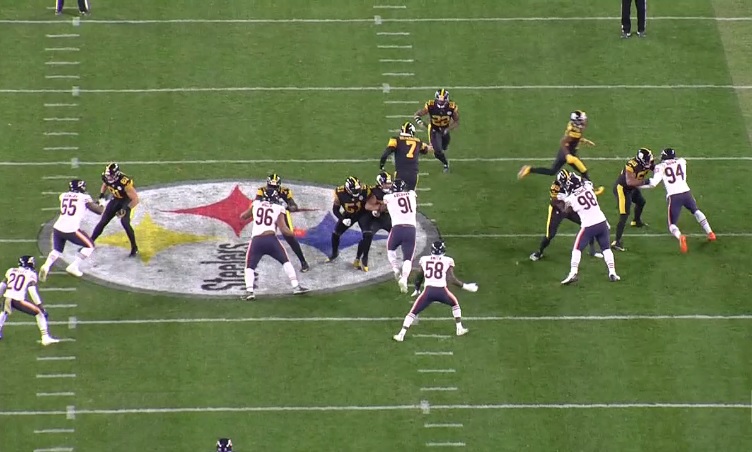 Off the edge, Robert Quinn (#94) beat Dan Moore Jr. That’s not really an issue of play action, Moore is in his pass set off the snap. But his feet stop on contact and he drops his eye level. Quinn is able to turn the corner and wrap Roethlisberger up.

Blame pretty obvious here. Moore loses the edge almost immediately and the sack falls on him. Gotta give the QB more time, especially on play action.

Credit to the Bears here. With the Steelers working out of empty and only five to block, they present an aggressive look up front. Five on the line, three down linemen, and two EDGE rushers, with #58 Roquan Smith off-ball. Pittsburgh has to respect the guys on the line and assume all will blitz. Working left to right, the LT takes the RDE, the LG the RDT, the center the NT, the RG the RDT and the RT the RDE. Five-on-five, the way it has to be blocked up. 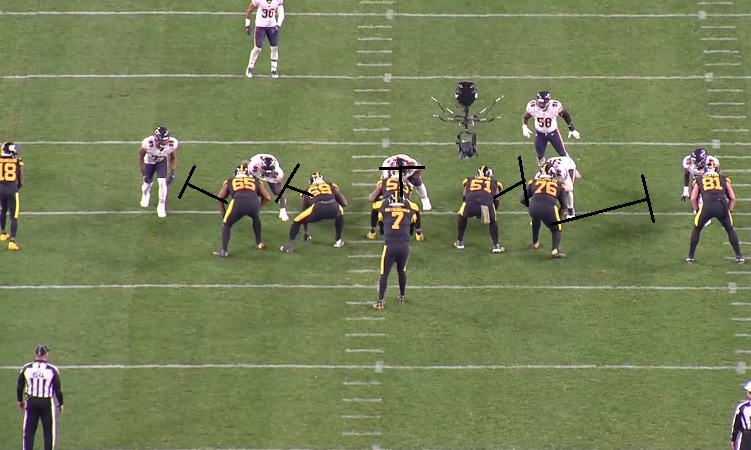 But the Bears bluff and drop out both EDGE rushers, instead bringing Smith up the middle. On the snap, the Steelers’ line fans out to take their assignments. On the right side, RG Trai Turner’s step is away from the center to pick up the RDT (because if the RDE blitzes, Chukwuma Okorafor has to have him).

Once Turner realizes the RDT is now containing and replacing the RDE dropping out, he tries to step back down to pick up the blitzing Smith. But it’s too late and Smith is through the A gap with a free path to the QB, who takes Roethlisberger down. 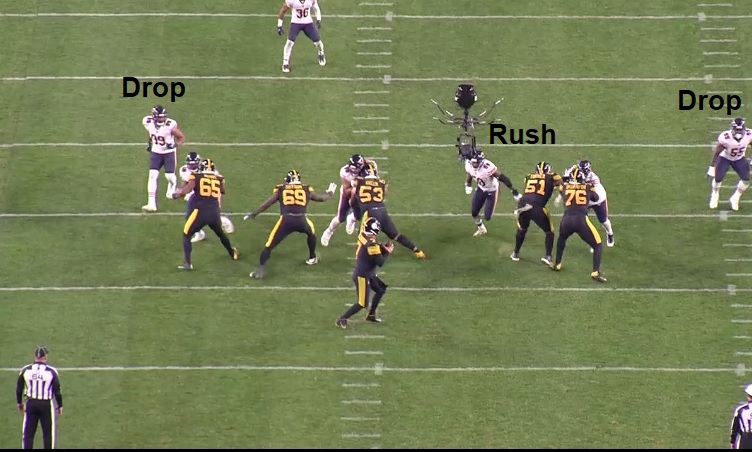 I understand the adage is to block inside/out. But here, it’s big on big protection. O-line taking D-line. They can’t be responsible pre-snap for an off-ball LB who has less of a chance to blitz than guys on the line who get paid to rush the QB. That’s the issue of empty. It’s limiting in being able to pick up off-ball blitzes. The protection isn’t as flexible and doesn’t have as many answers.

Though I know ultimately only five rush and five block, the Steelers have to know pre-snap that LB can’t be accounted for in the protection, which means there needs to be a hot read if that guy comes. But no WR has their head or eyes off the snap of the football, turning Roethlisberger into a sitting duck. 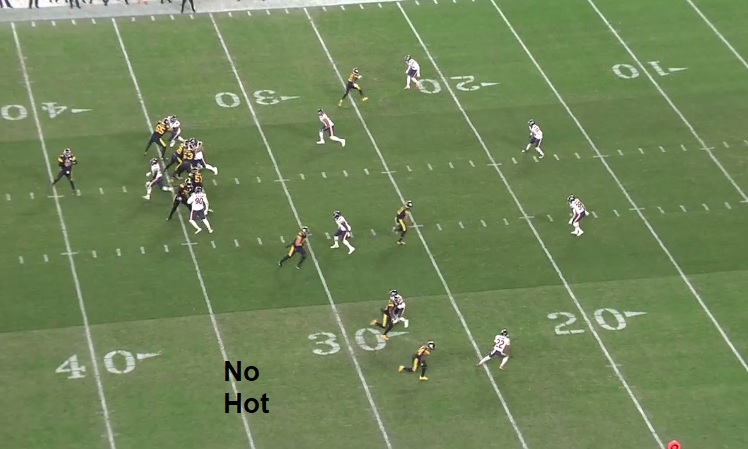 Maybe there isn’t a hot built-in here and there should’ve been. Perhaps that falls on Roethlisberger or OC Matt Canada. Or maybe there was a hot that was missed. I’m going to put half on the receivers for no one being hot and half on the Bears for a really good scheme. Though Turner looks bad here, not blocking anyone and staring at his QB getting sacked, I can’t blame him here based on his assignment.

Blame: Half on receivers, half on coverage/scheme

Ugly-looking play all around. First, and you’ll see in the GIF below, it’s well-covered by the Bears despite five men going out in the pattern. Facing 3rd and 8 knowing a first down would be huge, Roethlisberger is trying to wait for something to open up.

Up front, RT Chukwuma Okorafor loses the edge, the DT (#97) swims through and splits Kevin Dotson and Kendrick Green, falling to the ground at the end, and Cassius Marsh comes off Trai Turner to clean things up as Roethlisberger escapes and climbs.

This isn’t blocked particularly well, but Roethlisberger does escape the initial pressure until Marsh pops him. Can’t blame Turner for losing the block with how long this play took snap-to-sack and the pocket shifting to the left. This became a scramble play. Dotson and Green did allow the DT to split the double-team and that’s where the pressure immediately comes, forcing Roethlisberger to take off. Green in particular should’ve done a better job of squeezing the gap and not letting the DT through.

Couple that with the WRs unable to get open initially and I’ll put half the blame on them (had Marsh not gotten home, Diontae Johnson did work the scramble drill well and got wide open) and the other half on Green, who didn’t secure the double on the DT well enough, which is the reason why Roethlisberger moved off his spot.

Good news is Marsh was called for taunting on this play and the Steelers’ drive kept going, resulting in a key field goal.

Blame: Half on Receivers, half on Kendrick Green

Another play action, max-pro shot. Similar as the first clip (another high-hat read on the snap). Dan Moore Jr. loses the edge to Robert Quinn. Moore’s feet keep sliding here and he has his eyes up, but doesn’t get a good punch and Quinn whooped him all day with speed moves off the edge. Quinn doesn’t get the sack but pressures Roethlisberger, who loses his balance.

LG Kevin Dotson’s hands are too wide, he gets forklifted, and he’s not in control of the block, quickly losing it after Moore does. And that’s when Roethlisberger goes down.

Two-man route with nothing readily available downfield, but the line didn’t offer much time. Matt Canada might want to be a more aggressive play action team but the Steelers aren’t any good at it. Again, high-hat read isn’t helping.

Blame: Half on Dan Moore Jr., half on Kevin Dotson