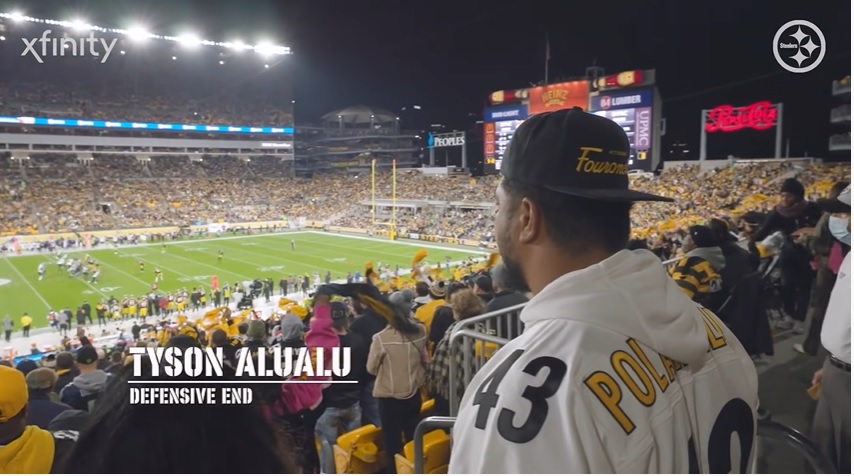 I’m not naïve to believe one man will solve all the Pittsburgh Steelers’ run defense issues. But if there is one guy whose loss should be noted above all the others, it’s nose tackle Tyson Alualu. Shelved on IR since fracturing his ankle five quarters into this season, the Steelers have no Plan B.

Sunday was further proof of that. Backup NT Isaiah Buggs was named inactive, and the team ran with Cam Heyward and Henry Mondeaux in the middle. Neither option is appealing. Heyward can do it, but it means he takes on more double-teams and combo blocks, unable to get 1v1 on guards more often. And Mondeaux is not a run stopper in any sense of the word.

Pittsburgh never really had a good plan behind Alualu. A lynchpin to its run defense, there’s an astounding, clear correlation between Alualu’s availability, health, and the team’s production.

Alualu was healthy for the first seven games of 2020. A low block by Ravens’ FB Patrick Ricard took him out early in Week 8, spraining his MCL. Baltimore ran for 267 yards that day, and the Steelers’ run defense tanked from there. Alualu did return two weeks later, but clearly not healthy. He played with a bulky knee brace. To make matters worse, he battled a high-ankle sprain late in the season, gutting out every single game the rest of the way.

After nearly signing with Jacksonville this offseason, he re-upped with Pittsburgh and played in the Week 1 opener against Buffalo. The fractured ankle came the next week, early in a game against the Raiders, knocking him out for the rest of the season.

With Alualu healthy, Pittsburgh had the league’s third-best run defense. When they lost him, even with all the other talent they had defensively, their YPC increased by a half-yard and their run defense fell nine spots. This year, mostly without him, and Pittsburgh’s run defense has increased another half-yard and is – somehow – not last in the NFL. Only the Minnesota Vikings are worse, just barely, at 4.83 YPC compared to the Steelers’ 4.82.

A remarkable difference one man makes. Sure, the issues run deeper than Alualu not being available. This team can’t tackle, linebackers get off blocks, and game circumstance has allowed teams to run ball in the first place. But there’s a clear trickle-down effect at play. Alualu occupied multiple blockers, secured his gap, and helped keep linebackers free more often.

Steelers fans know and appreciate that role well. If a 3-4 front doesn’t have a strong nose tackle, it’s difficult to play good run defense. Casey Hampton’s value wasn’t in making all the tackles. It was freeing up guys like James Farrior, Larry Foote, and Lawrence Timmons to do that. Joel Steed and Gary Dunn had similar roles and results. Right now, Isaiah Buggs, who the team didn’t think of enough to dress Sunday, can’t even get in the correct stance.

Here’s just some of the plays Alualu made last season no other nose tackle – Buggs, Mondeaux, etc – could even dream of routinely making.

Just another week of Tyson Alualu blowing up the center. Nearly got to Tannehill before the handoff. #Steelers pic.twitter.com/PTmduH8ujd

Heck of a year for Tyson Alualu. Knee injury slowed him down some but dude found the fountain of youth at 33. Underrated FA I hope the Steelers' re-sign. #Steelers pic.twitter.com/hNp5n7BgPR

If Pittsburgh had even a fraction of those plays, the Steelers’ run defense wouldn’t be near as bad as it is now. Would they still be a top five unit? Probably not. But they’d probably be around average. Not great, but much more manageable. Of course, Stephon Tuitt’s loss can’t be overlooked, either. But Chris Wormley has played OK enough in his absence, and Alualu’s presence in the middle can’t be ignored.

Quality depth is tough to have. Especially at nose tackle, a position that plays more than people think, but isn’t the every-down spot like other defensive positions Buggs is a talented player capable of performing better than he is. Physically, he’s gifted. Above the neck, he’s a mess.

It’s hard to believe the Steelers nearly let him leave the city over $500,000; only a freak positive COVID test gave Alualu time to reflect and change his mind. That shows a fundamental misunderstanding of either the Steelers’ defense or Alualu’s talent.