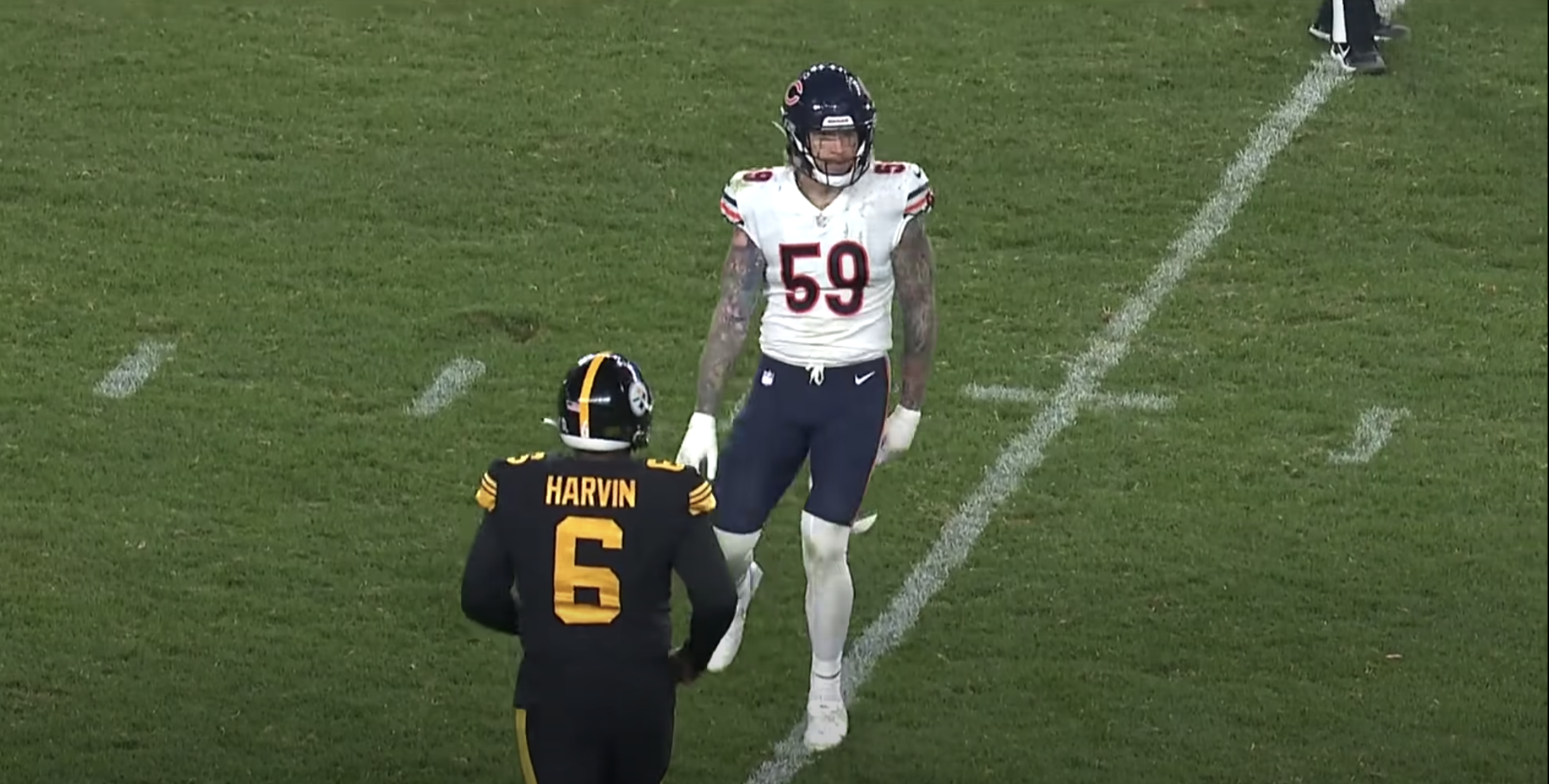 The most talked about play from the Pittsburgh Steelers’ Monday night win over the Chicago Bears was a crucial 3rd and 8 sack by former Steelers outside linebacker Cassius Marsh, late in the fourth quarter. While the Steelers were leading at that time, they had lost momentum, so such a play at such a moment felt deflating.

That’s a least until Marsh was flagged for a taunting penalty, which has been widely debated, though largely chastised. Long story short, the penalty allowed Pittsburgh to continue the drive and ultimately get a field goal out of which, which allowed them to execute a final drive for which a field goal would give them the go-ahead score.

After Marsh recorded the sack, he took about seven steps toward the Steelers’ sideline, though still rather far away from contact with any player, and in his body language clearly conveying the general message of ‘take that’. Just before he turns back to his own sideline, he also briefly mouths something, though it’s impossible to know what was said.

For the average football fan, and people in general, all of this amounting to a 15-yard penalty and an automatic first down, let alone a penalty at all, seems absurd. Even recognizing that the NFL has made officiating against taunting a point of emphasis this season, many have pointed to this particular play as an exemplar for not the ‘bad’ rule, but bad execution of it.

Tony Corrente was the official who threw the flag, and he was asked about the flag after the game. Reminding first that taunting is a point of emphasis this year, the official said, “I saw the player, after he made a big play, run toward the bench of the Pittsburgh Steelers and posture in such a way that I felt he was taunting them”.

Referee Tony Corrente to pool reporter @AdamHoge on why he threw a late taunting flag on Chicago’s Cassius Marsh: “I saw the player, after he made a big play, run toward the bench area of the Pittsburgh Steelers and posture in such a way that I felt he was taunting them.” pic.twitter.com/KJH5ubgh9B

Under the Prohibited Acts portion of the Non-Football Act Fouls section of the 2021 NFL Rulebook, the following is listed as acts of unsportsmanlike conduct:

One could argue that Marsh’s posturing could fall under the third part there, at least. And the league defended Corrente’s decision. For the first time all year, they released a video detailing a few of the officiating decisions during the week, which used to be a weekly and extensive occurrence.

In the video Perry Fewell says of Marsh’s action, “he takes several steps toward the Pittsburgh bench, posturing toward the sideline. Taunting is a point of emphasis to promote sportsmanship and respect for opponents. This was recommended by the Competition Committee, and coaches”.

NFL SVP of Officiating Perry Fewell on the Cassius Marsh taunting penalty from Monday night: “He takes several steps towards the Pittsburgh bench, posturing towards their sideline.”

Once again, the league isn’t backing off the emphasis on taunting.pic.twitter.com/QzH6fl02XK

Not very much there in the way of explaining how this ended up being taunting, with the obvious implication left being that they deem ‘posturing’ to be taunting. I think there is obvious grounds for that, though; numerous other taunting flags that have been thrown this year amount to ‘posturing’, though typically much closer to an opponent. They also don’t typically walk about a quarter of the way across the football field to do it, though.

Speaking personally, I think this is the case of the rule being fairly applied in-game. I say fairly because I think it’s equally reasonable if a flag were not thrown. I also understand the league’s ambition here in eliminating unsportsmanlike conduct from the game and penalizing it harshly to condition players to adapt their behavior.

Still, when you see things like this, you know how you would feel if your team had been on the other side of the call. It’s easy to try to take an objective approach to the rule when the team you root for was the beneficiary.

But the bottom line is that taunting has been a point of emphasis all season, and it’s been officiated as a point of emphasis in ways that has made it obvious to everybody involved in the game. Players should know to avoid any type of behavior that could be deemed unsportsmanlike, so it’s ultimately their responsibility to keep themselves out of those situations. Marsh obviously did not when he decided to unnecessarily approach the Steelers’ sideline, perhaps with the officials aware that he is a player who is facing a former team who let him go.