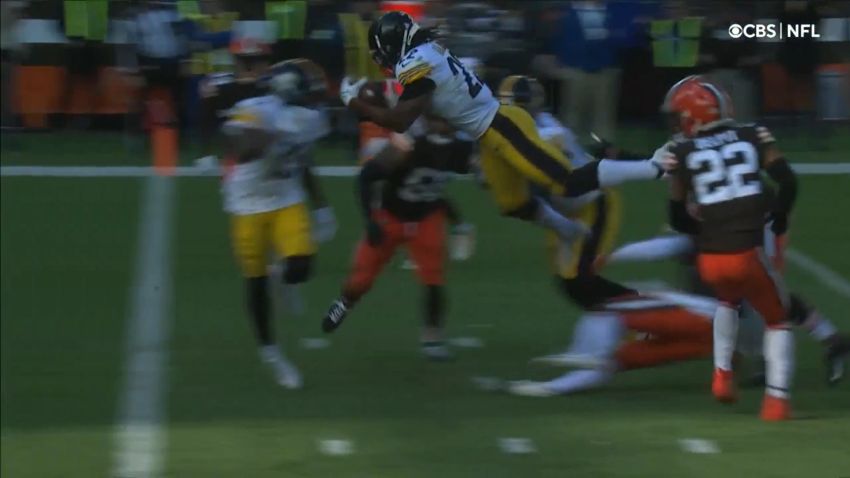 Whatever the Pittsburgh Steelers did during the bye week to correct the missed tackles problem, it seemed to work Sunday inside FirstEnergy Stadium in a 15-10 win.

After recording a team-high 22 missed tackles in the six years I’ve been charting this for Steelers Depot, the Steelers rebounded in a big way on Sunday, recording just 11 missed tackles on the afternoon, nine of which came on defense while another two came on special teams.

That number is still a bit too high for my liking, but the Steelers didn’t have any misses that led to splash plays for the Browns, which is key.

As you can see from the numbers, it was a strong day overall, especially against a powerful rushing attack like the Browns.

I will say though, it’s concerning Minkah Fitzpatrick continues to miss so many tackles in recent weeks. He’s constantly around the football, but he’s not coming up with turnovers (which is largely based on luck) and he’s missing tackles at an alarming rate.

Early on, Fitzpatrick came up with a miss against Browns’ running back Nick Chubb in the first quarter.

Baker Mayfield found Chubb quickly out of the backfield on a swing route designed to get the star running back in space against second and third-level defenders. The play worked perfectly as Chubb squared off with Fitzpatrick in the open field.

Fitzpatrick comes in out of control, fails to break down and goes biting at ankles, which simply won’t work against Chubb. Fortunately for Fitzpatrick, Devin Bush is right there to clean up his mess.

Later in the first half, Fitzpatrick records his second miss of the game, this time on Browns’ running back D’Earnest Johnson. Johnson and the Browns are just trying to run out the first-half clock, but Fitzpatrick gave them a little late life by missing Johnson in space, again diving at ankles, whiffing on the play.

Johnson takes the handoff and picks up the first down because Fitzpatrick over-pursues and then dives at his ankles, allowing the powerful Browns’ running back to step right through the attempt and pick up additional yardage.

Coming out of the half, the worst missed tackle of the day for the Steelers belongs to Bush.

The Browns went right down the field in the third quarter, scoring on a play they had no business scoring on.

Johnson runs off left tackle and Fitzpatrick does a great job cutting him off, turning him back towards the help in Bush. Instead, Bush over pursues, allowing Johnson — who makes a beautiful cut — to waltz into the end zone untouched when he should have been stopped near the line of scrimmage. I gave Bush the miss for the woeful over pursuit. Some will say Fitzpatrick should get a miss here too, but he did his job cutting the run off, turning Johnson back inside, just like he’s taught.

Offensively, the Steelers forced 11 missed tackles in the win, meaning they were even in the forced missed tackles:missed tackles ratio, which is the first time that’s happened in three years, according to my charting.

Rookie running back Najee Harris again stole the show, but it was a fellow rookie in tight end Pat Freiermuth who stepped up big when the Steelers needed him the most.

Freiermuth wasn’t known as much of a YAC guy coming out of Penn State, but he had a clutch catch-and-run against the Browns in the third quarter of Sunday’s win.

Freiermuth does an excellent job securing the catch knowing the hit is coming, and then gets his head around quickly, allowing him to react and avoid the tackle before converting the first down. This catch and run by the rookie helped set up a touchdown by Harris a few plays later on the drive, giving the Steelers life.

Harris then had a catch-and-run of his own that turned heads and ultimately set up Freiermuth’s touchdown. Funny how that worked out, huh?

I mean, good luck against this guy in space.

Right away Harris has a quick stiffer to force one missed tackle, and then watch him search out contact at the end of the run, punishing the Browns’ cornerback, adding a second forced missed tackle onto the catch and run, moving the chains and giving the Steelers a real jolt late in the third quarter.