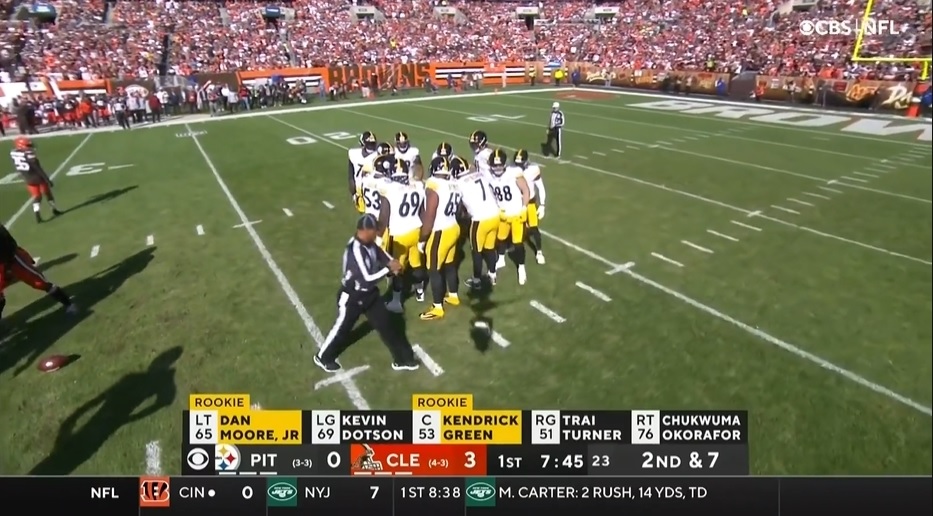 As we wrote about earlier this week, the Pittsburgh Steelers’ offensive line isn’t just playing better. They’re playing with a confidence and energy they hadn’t quite showed all season long, no doubt tied to their improved performance. Matt Canada has observed the same and spoke to that point in his weekly Thursday press conference with reporters.

“I would concur with you that the excitement and the passion you saw of them playing and getting blocks was exciting to see,” Canada said about the O-line in audio provided by the team. “And the the product showed that’s what it was. We had good production.”

Pittsburgh’s run-blocking was arguably at its best in Sunday’s win over Cleveland, even better than their Week 5 performance against the Denver Broncos, Najee Harris’ lone 100-yard rushing game this season. The Steelers’ consistently created movement at the first level and had pancakes across the board, burying Browns’ defenders again and again. The organization’s vision was to rebuilt the O-line from scratch, which they did, and create a physical, aggressive group. Sunday’s win brought that vision to light.

For this group, it’s been a long-time coming.

“We know the mistakes we’ve made. We know some good things that have happened that maybe everybody else doesn’t see. So each week we’re trying to improve that. I think [Adrian Klemm and Chris Morgan] have done a great job with those guys, but all ultimately it only comes down to those guys.”

The O-line struggled mightily the first three weeks of the season, getting little push up front, making too many assignment and technical mistakes, and drawing too many penalties. Penalties are still an issue now, but the other problems have been cleaned up. A young group like the Steelers’ required patience and time to grow. Patience that is now paying off.

Still, this group must continue to improve its play. They have to get flagged less often, a recurring problem Mike Tomlin’s harped on for several weeks now. Pass protection can grow too, especially if they have to face Chicago’s Khalil Mack Monday night. Mack has six sacks in seven games this year but missed last week due to a foot injury.