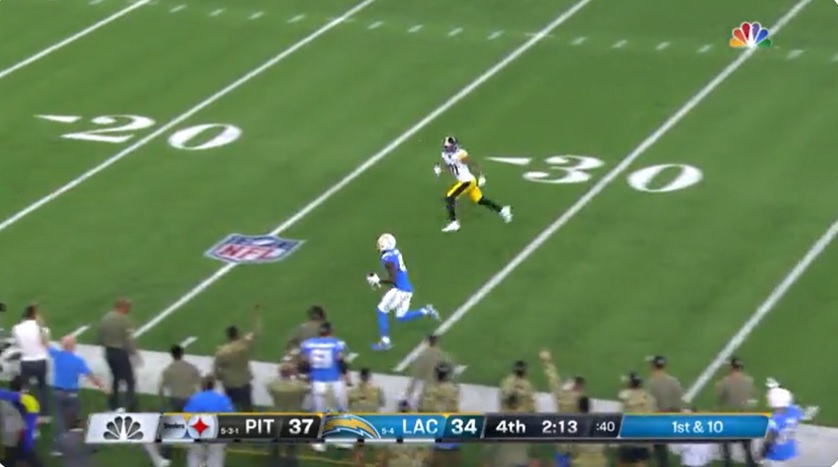 The Pittsburgh Steelers were missing several of their defense’s biggest players on Sunday Night Football against the Los Angeles Chargers. In a game L.A. eventually won 41-37, Pittsburgh was playing without a pair of All-Pros in pass rusher T.J. Watt and safety Minkah Fitzpatrick, as well as without top cornerback Joe Haden.

Playing short-handed, Pittsburgh ended up allowing over 500 yards of offense to L.A., including a season-high in passing yardage. But despite that, the Steelers authored a 14-point comeback in the second half, and held a field goal lead with 3:24 to play in the game before one final big strike from L.A. with two minutes to go gave the Chargers the win.

The four-point loss left the Steelers just one or two plays short of earning that win instead. A central figure of his team’s comeback and the defense’s leader on Sunday, Cameron Heyward said in his postgame press conference provided by the team that the opportunity was there for his side of the ball to come through, not just overall in the game but specifically when defending that three-point lead with minutes to go. They just came up short.

“I think there was instances where we didn’t make enough plays. Some of those guys we’ve had are playmakers, but it gives an opportunity to the younger guys, and we didn’t seize it enough,” Heyward said. “I know we got the lead late, but man, we needed to get off, and that’s going to bug me all week because we got a chance to really take this one away. And even if you make them settle for a field goal, you know, you’re still winning that game, I think. But man, we got to buckle down and focus on Cincinnati.”

After a Chris Boswell field goal with 3:24 left put Pittsburgh up 37-34, the Chargers needed only three plays to go 75 yards and win the game. A short and then intermediate pass gave way to a 53-yard touchdown completion from Justin Herbert to Mike Williams that beat Pittsburgh’s secondary, playing without Fitzpatrick and Haden.

The touchdown gave L.A. the lead, and forced Pittsburgh’s hand on their next drive, which ended with a turnover on downs. Even if the Steelers limited L.A. to a field goal, Pittsburgh would have either gotten the ball back with a chance to kick a game-winner in regulation, or to go to overtime and try to win it there.

It was the third touchdown thrown by Herbert in the game, and first that didn’t go to Austin Ekeler in a four-touchdown game for the L.A. running back. It also took away from a Pittsburgh comeback that was highlighted by a blocked punt from Miles Killebrew that led to a touchdown, and then a deflected pass by Heyward at the line that was intercepted by teammate Cameron Sutton, also leading to a touchdown.

The comeback had Pittsburgh in front with a chance to steal the win, which would have been a very important one — the Steelers dropped to the first spot out of the playoffs with the loss, but would have remained in the top seven in the AFC with a win.

Now, they will need a divisional win over Cincinnati this coming Sunday to climb back in to the postseason bracket, with seven weeks left in the regular season.