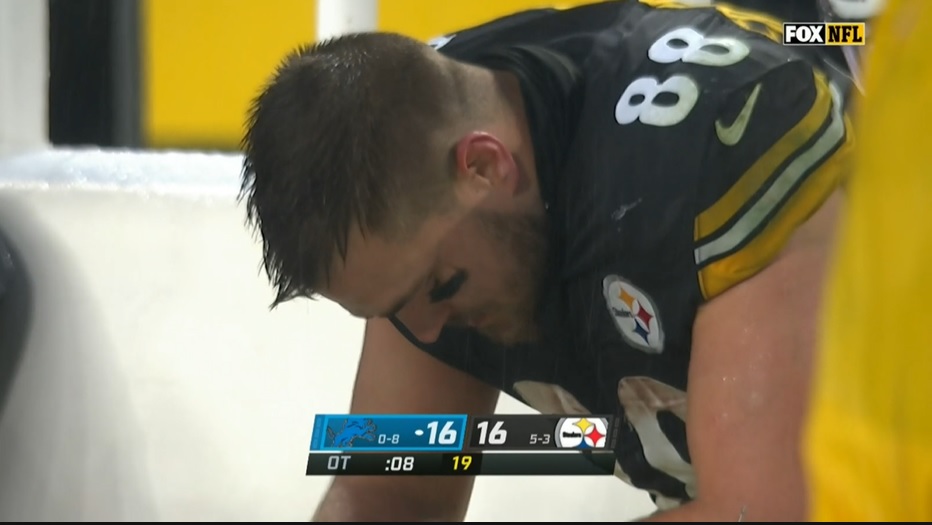 Even with Ben Roethlisberger a last-minute scratch, the Steelers should’ve won this game. On paper, they were the better team. Mason Rudolph wasn’t a rookie making his first start. He was a prepared veteran whose play has improved from that trial-by-fire 2019 season. And this was an 0-8 Lions team, a team slightly better than their goose egg record indicated. But not by much.

Worse yet, the Lions were completely one-dimensional, wholly scared of throwing the ball in almost all circumstances. At least five times, they ran the ball on third and long. To them, punting was better than throwing. But this Steelers’ defense continued to struggle against the run. There are injuries, especially up front, but Devin Bush isn’t hurt. Neither is Joe Schobert nor Alex Highsmith nor Minkah Fitzpatrick, men who all had their struggles defending the run in this one. Pittsburgh knew exactly what was coming and failed to stop Detroit until the fourth quarter when they had to. By then, it was a ballgame.

But accepting that fact, this was still a winnable game. All Pittsburgh had to do was not turn the football over, the #1 killer to losing (or tying) these types of games. The Steelers failed to do so. Three turnovers, including two in overtime. They gave the Lions great field position and robbed Pittsburgh of theirs. The final two ones, fumbles by Diontae Johnson and Pat Freiermuth, took away the chance for Chris Boswell to attempt a game-winning field goal. With the way he’s been kicking, including another 50-yard make Sunday, odds are good he would’ve ended things.

Whether it’s Roethlisberger or Rudolph leading the team, this is an offense unable to score points in a league which demands it. Exiting Week 10, the Steelers are now just one of five teams who haven’t put up 30+ points in a game this season. The others on the list are an inspiring mess: Jacksonville, Chicago, Miami, and the New York Giants. Combined, those teams are 11-26.

Pittsburgh had golden chances for points yesterday. Three times they entered the red zone against Detroit, whose 83% score rate was not only the worst in the league this year but was on pace to be NFL’s worst since at least 2003, as far back as red zone data is tracked. Only once did the Steelers hit paydirt, settling for field goals their other two drives.

It may have been *just* the Lions but this was an important week. The AFC North was a mess. Baltimore upset by Miami, Cleveland dog-walked by New England. A Steelers’ win would’ve meant control of the division, moving to a first place 6-3 record. Not to mention an important cushion as the schedule toughens up beginning Sunday night at Los Angeles.

Pittsburgh didn’t enter yesterday’s game looking for a tie. Nor should they feel good about the outcome. The Lions? They’re probably happy just not to lose another game. That isn’t the Steelers’ standard. Unlike Detroit, they have a path to the postseason. But Sunday’s tie could easily come back and haunt them when the playoffs are seeded.