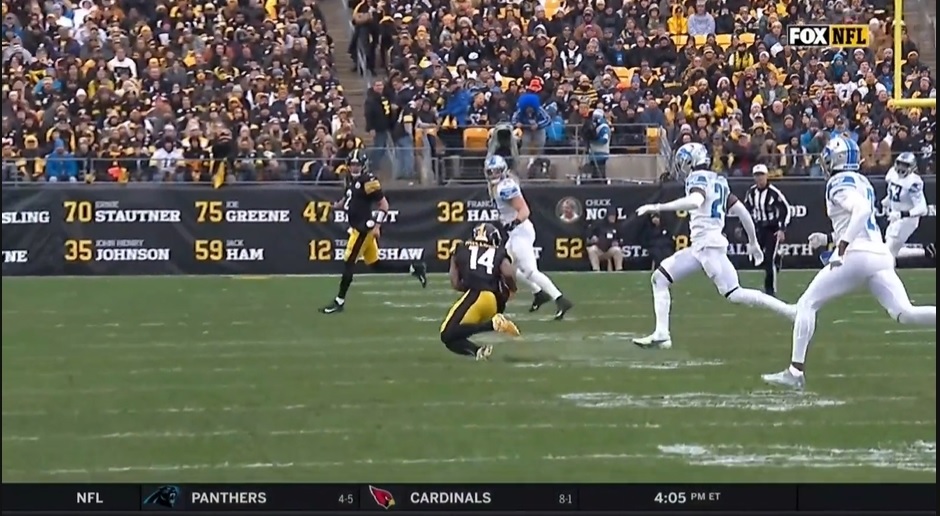 To much of the distain of Steelers Nation, WR Ray-Ray McCloud became the featured receiver on Sunday’s matchup against the Detroit Lions at Heinz Field. Primarily serving as the team’s punt and kicker returner, McCloud found his way into more playing time on the offensive side of the football after JuJu Smith Schuster went down with a shoulder injury that cost him the rest of the season. Instead of deploying James Washington more in the offense, it was McCloud that steeped into JuJu’s role in the slot, relegating Washington, who asked for a trade earlier this season to a continued rotational/backup role. Once Chase Claypool went down with a toe injury last week against the Bears, Washington got onto the field as his replacement.

However, it was McCloud who was the apple of Mason Rudolph’s eye against Detroit, catching nine passes on 12 targets for 63 yards (7.0 YPR) while averaging 5.25 yards-per-target. Steelers fans often lament at how much Ben Roethlisberger checks the ball down and doesn’t attack down the field, but Rudolph said “hold my beer” to that statement, averaging 4.84 yards/attempt via Pro Football Reference. Part of the reason for the poor average came on the failed pop pass attempts to McCloud like this one where McCloud comes on the jet motion but runs straight to the sideline rather than getting up field, running into the back of #81 Zach Gentry who gets blown back as McCloud runs out of bounds for a loss of yardage.

OC Matt Canada ties to do the same thing here to the left side in the second quarter, but the lions defense sniffs it out at #65 Dan Moore Jr. allows #53 Charles Harris to run right past him and wrap up McCloud for a big loss of yardage on a promising 1st-and-5.

McCloud had a 75% catch percentage on the game according to Pro Football Reference which isn’t terrible in hindsight given the 12 targets he received, but seeing as most of these targets were near the LOS, there were several passes that you wish McCloud could have brought in. For example, at the beginning of the second quarter, McCloud runs a slant over the middle from the slot, but the slot defender breaks on the ball and gets his hand in there to force the incompletion. Should the throw by #2 Mason Rudolph be quicker and McCloud take a sharper angle inside on his brake, this pass has a better chance of being complete.

However, not all the blame can be put on McCloud for missed completions as Rudolph looked extremely shaky at times in this one. For example, watch this 3rd-and-goal pass attempt where McCloud is open in the end zone, but Rudolph skips the ball at McCloud’s feet from a clean pocket, forcing Pittsburgh to kick a field goal rather than get the TD to potentially go up by one.

This incompletion appears to be a miscommunication by Rudolph and McCloud as McCloud goes vertical from the slot, but Rudolph throws the ball to the sideline with only 25 seconds remaining in OT. McCloud readjusts to the sideline and gets held up by the coverage defender who avoids the pass interference call as the pass falls incomplete.

Even on the completions between Rudolph and McCloud on the afternoon, several of Rudolph’s pass were not pretty to say the least. On this 3rd-and-9 completion to McCloud, we see him run a corner route to the right sideline as Rudolph throws the ball. However, the ball comes out wobbly and short, forcing McCloud to run back to bring in the catch several yards short of where the pass should have been completed. The ball could have been wet and slick coming out of Rudolph’s hands given the rainy conditions, but still not a beautiful completion to say the least.

This was just one of a few plays that McCloud made as a receiver past the LOS in this one, finding holes in the zone coverage to give Rudolph an open target to pick up first down yardage. On the first drive of the game, we watch Rudolph secure the high snap and locate McCloud on the left sideline who finds the hole in coverage, bring in the pass to move the sticks.

Later in the first quarter, we watch McCloud get open against man coverage on the play action pass where Rudolph runs to his right to extend to play to find McCloud running to the sideline as he makes a sliding grab to bring in yet another wobbly pass for the first down.

While McCloud is smaller in stature (5’9, 190lb), we showed a lot of toughness on a couple of these pass attempts over the middle of the field and to the sideline with defenders bearing down on him. Just watch this play where McCloud runs the corner route to the right sideline, bringing in the pass while simultaneously getting leveled by #21 Tracy Walker III coming down from the safety spot. McCloud manages to hold onto the ball while staying in-bounds to pick up the first down.

Mason Rudolph didn’t do McCloud a lot of favors in this one, as plenty of his passes were either off-target or put McCloud at risk of being sent to the hospital. Here is another completion to McCloud as he runs to the flat on 3rd-and-6, but the defender in pursuit upon catching the ball at the LOS, giving McCloud no chance to try to make a move after the catch. What is strange is that Rudolph has time in the pocket on this play, but knows he is throwing this ball to McCloud on the snap despite the defense sniffing it out.

While serviceable as a backup slot receiver, the Rudolph-to-McCloud connection was far from spectacular on the afternoon as we have come to expect from McCloud, being more of a gadget guy rather than a traditional slot receiver. McCloud was just as uninspiring in the return game, averaging 17.5 yard-per-kickoff return and 9.00 yards-per-punt return. McCloud has taken his lumps for poor judgement and putting the ball on the ground in the return game recently, and he narrowly avoided another big mistake in this game on this called touchback. Watch how the Lions’ gunner attempts to hit the ball away from the end zone and McCloud tries to catch it, tipping it to the ground as another player recovers the ball nearly inside the one.

Here is another punt return attempt where McCloud calls for the fair catch as it appears he loses sight of the ball in the air possibly due to the rain, and nearly slips and falls to the ground in attempt to corral the punt.

That being said, there are some instances where you see McCloud provide that spark in the return game where he makes a good move to get good yardage on the run back. Here is one example on a punt return in the fourth quarter where McCloud catches the ball with room to run and makes a nice cut to the right and shoots through a small gap of coverage men, getting wrapped up after running by several Lions for a nice return.

Overall, it was an average performance for McCloud who got a lot of flak for being so featured in the receiving game against the Lions. While I am in complete agreement that McCloud is just-a-guy and shouldn’t likely be considered a high-end option for being a starter in the slot, he did make several key first down grabs and had a chance at several more if Mason Rudolph had better delivery on his pass attempts. The jet sweeps/pop passes can be frustrating as we have seen Diontae Johnson and Chase Claypool do well in this area, but the blocking wasn’t great either by both Gentry and Moore on McCloud’s two attempts.

I do agree that Pittsburgh should potentially look into giving practice squad receiver Anthony Miller a chance to play over McCloud in the slot and potentially Steven Sims the opportunity to contribute there as well as return kicks and punts. This isn’t necessarily a knock-on McCloud and what he has done in this role, but seeing as he has a tendency to put the ball on the ground in the return game and has a limited ceiling as a receiver, Pittsburgh would be wise to look at all options on the table to see what gives them the best chance to move the ball and create big plays in the return game down the stretch as they attempt to make a playoff push.